Flowers Canada Ontario pays tribute each year to volunteers who have dedicated themselves to industry improvement and advancement. 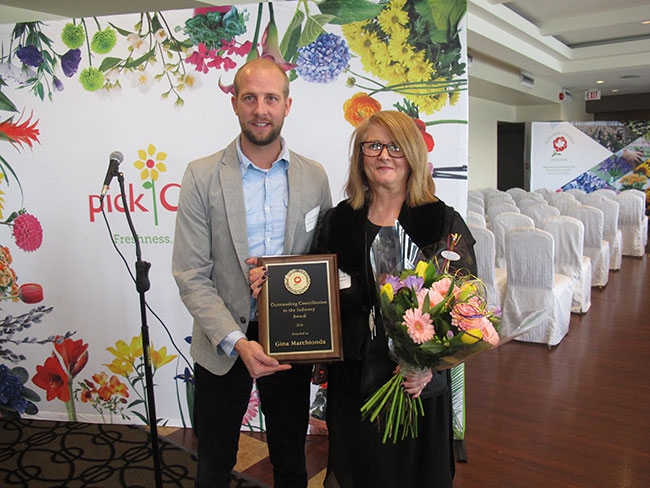 March April 2017 – A pair of longtime industry volunteers have been honoured by Flowers Canada Ontario during presentations at this year’s AGM.

JOHN VALK: “HIS FORWARD-THINKING IDEAS STRENGTHENED NOT ONLY HIS BUSINESS BUT ALSO THE INDUSTRY HAS A WHOLE.”
Making the presentation to Valk was his long-time friend and colleague Rob Bierhuizen of Sunrise Greenhouses. The two served on many boards and committees over the years.

Valk’s family immigrated to a Brantford area dairy farm when he was six. His dad had worked at dairy farming and grew cold frame vegetables in the Netherlands. The family soon moved to the small town of Grimsby where a nine-acre fruit farm was purchased and work slowly began on building Valk Greenhouses. The first greenhouse crop featured 4,000 square feet of spring tomatoes.

While in high school John Valk began working part time at Jordan Greenhouses, which was next door to their own farm. He began working with his dad in 1964 following graduation.

In 1968, John secured an Ontario Junior Farmer Establishment Loan for $40,000 and built a 1400-square-foot bungalow as well as new greenhouses on the farm.

Around this time John and Pauline were married and, working as a team, they built up the farm and their family over the succeeding years. Valk Greenhouses grew to 130,000 square feet, with three acres of outdoor production. Their main crops were hydrangeas, poinsettias and geraniums. Their son Sean was a partner in the farm for 10 of those years.

Even with all of the daily pressures of raising a family and building a business, Valk happily volunteered his time to actively lead many of the industry’s associations.

While the business was growing, so too was the town. Twelve years ago a developer presented the family with an offer they couldn’t refuse, and they sold the farm.

Bierhuizen picks up the story: “Now with spare time on his hands and not willing to sit idle, John jumped in once again to help Flowers Canada Ontario. (Then executive director) Irwin Smith needed someone to canvass the industry and get growers to sign a petition to the Farm Products Marketing Commission for FCO to gain Section 12 status. John, of course, was successful in getting enough signatures for that petition.”

And more recently, he has joined Excalibur Plastics part time in sales.

“Over the years, in any business there are ups and downs,” said Bierhuizen, “but John is quick to point out that the many good friends he made in the greenhouse industry have always been a support whenever times were down. And John has made many good friends in this industry.”

Sean Valk was unable to attend the ceremony but congratulated his dad in an email. “I couldn’t agree more with the selection of my father for this year’s Lifetime Achievement Award. Growing up in the industry, my father always taught us the value of a healthy industry.

“In no other business have I ever experienced where, if you had an issue, you would call one of your competitors and they would quickly come to discuss it with you and provide help and expertise to see what could be done to correct the situation.”

He recalled how the industry rallied to assist the family after his brother passed away in 1993 at age 18. “As devastating as this was, when I look back at those days there are a few things that really stand out that helped us get through that, including the outpouring of support from other growers in the area. There was an army of trucks ready to deliver our products, and people volunteering to manage the crop or anything else we might have needed … This is an industry that feels more like a family.”

In accepting the award, John Valk said he has had the privilege of working with “a lot of great and interesting people on all the boards on which I have served.”

GINA MARCHIONDA: “THERE IS STRENGTH IN NUMBERS WHEN DEALING WITH ISSUES THAT ARE COMMON TO US ALL.”
In accepting her award, Gina Marchionda paid tribute to her employer for their support of her work in the association.

“My years of service would not have been possible without the full support and encouragement of my employer, the Jeffery family. Since FCO’s inception, the Jeffery family has supported the work of the association both financially and through participation, encouraging each of its employees and management to participate in the projects and activities led by the association.

“The family understands, as I do, that there is strength in numbers when dealing with issues that are common to us all and that a strong and engaged association contributes to the success of each of its members, small and large alike.”

Marchionda was first elected to the FCO board in 2007 to take on the role of treasurer and has been re-elected to that post in succeeding elections since then.

“FCO has benefited greatly from Gina’s enthusiastic personality and financial skills,” said board vice-chair Jan Van Zanten of Van Zanten Greenhouses in presenting her with the award. “But her passion and understanding for small, family run businesses has been an even greater asset to the successes of the past 10 years at FCO.”

Marchionda has helped steer the FCO through some of its biggest challenges.

Back in 2007 when she was first elected to the board, the association had just submitted its application to the Farm Products Marketing Commission to achieve status under Section 12 to require all flower growers in the province to be paid members of the association.

Marchionda immediately jumped in and helped the board reach out to growers. She participated in all the meetings and convincingly explained the many benefits of FCO membership.

Marchionda has served for many years on a variety of committees for FCO and Flowers Canada Growers. She continues to represent flower growers on:

Marchionda has worked for Jeffery’s Greenhouses since 2001. Prior to that she articled with KPMG and then worked for private industry in manufacturing and transportation companies.

“Gina feels very comfortable in the family oriented business atmosphere, as she herself was raised in the same environment,” said Van Zanten. “She has commented that she has never seen such an industry as the one she is in now.

“There are few other sectors where everyone is so willing to get together and talk things out, or where companies are willing to work together to get something that benefits everyone.”

In addition to her work in the industry, Marchionda is also involved in her community. Since 2010, she and her father, now 83, have participated in the Big Move Cancer Ride to support Niagara’s Walker Family Cancer Centre.

“A quick look on their web site shows Gina’s name on the list of top fundraisers for the 2016 event,” said Van Zanten.