March 12, 2020
By Greta Chiu (with files from the Canadian Horticultural Council)

March 12, 2020By Greta Chiu (with files from the Canadian Horticultural Council)

Several individuals were recognized at the Canadian Horticultural Council’s annual general meeting in Ottawa this week.

Among the award winners was Linda Delli Santi, executive director of the BC Greenhouse Growers’ Association and chair of the CHC Greenhouse Vegetable Working Group. Delli Santi was presented with the CHC Outstanding Achievement Award, which recognizes individuals who have demonstrated dedication, long-term commitment and outstanding contribution of time and effort to improving the field of horticulture within or outside Canada, through leadership, innovation, cooperation and hard work.

“Her valuable leadership has been pivotal in developing a collaborative national forum for greenhouse vegetable growers,” says Brian Gilroy, president of the CHC, who highlighted her work on a number of issues including farm labour programs, worker safety, energy, carbon pricing, trade, plant health and more. “She readily tackles complex issues and continually steps up to the challenges faced by greenhouse growers.”

In addition to co-chairing the Greenhouse Task Force that is helping lead the Canadian industry-government response to the tomato brown rugose fruit virus, Delli Santi actively serves on a number of other agricultural advisory committees as well. 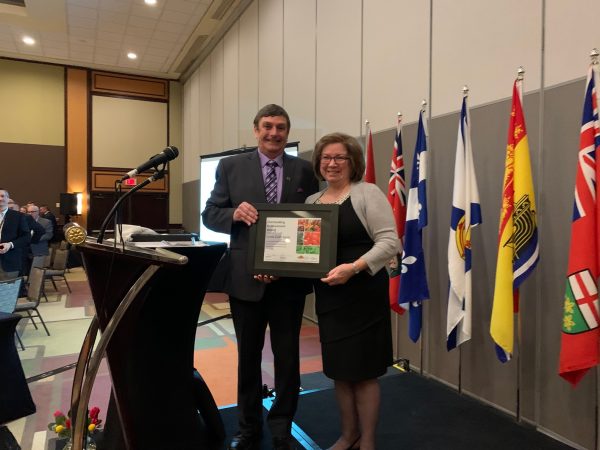 “While she has joked her husband “bought her a job” when he purchased their first commercial vegetable greenhouse and then asked her to run it, with the dedication Linda has shown, it looks like she found her calling and never looked back,” Gilroy says.

After nearly 30 years of growing beefsteak tomatoes and bell peppers, Delli Santi retired her five-acre greenhouse in south Langley, B.C, when the province introduced a new carbon emissions tax that substantially impacted her profits. “It is her own personal story that very eloquently put a face on the greenhouse sector and influenced policy makers within the provincial and federal governments,” says Gilroy.

Other individuals honoured at the banquet included Shirley Archambault, who was named a CHC Honourary Life Member. Archambault was credited for her work in advancing growers’ access to pest management products in Canada, including minor use registrations. 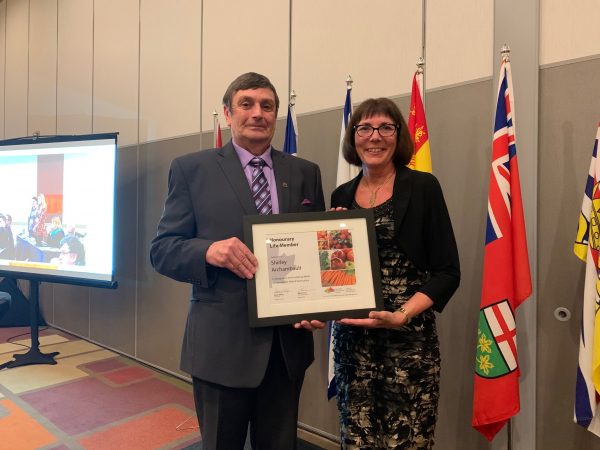 “Ms. Archambault has never been intimidated in the face of difficulties when it came to providing support to Canadian growers, often relying on her extensive network within the grower community, provincial officers, industry and her colleagues at the United States Department of Agriculture (USDA) Inter-Regional Project 4 (US IR-4),” says Gilroy. “…[she] has been a key contributor to the competitive parity of Canadian growers with their American counterparts, by ensuring our growers have access to the same safe, effective pest control products.”

Tom O’Neill was also named a CHC Honourary Life Member, recognized for his success in leading the marketing efforts of Ontario’s fresh apple program. “Tom is always willing to share his wealth of knowledge mentoring many in the sector. He continues to strive for excellence with a constant interest in staying current in the world market, a testament to his dedication to the Norfolk Fruit Growers’ Association and the Ontario apple industry,” says Gilroy.

The final award of the night, the CHC Doug Connery Award, was presented to Tracy Shinners-Carnelley, vice-president of research and quality at Peak of the Market, for her demonstrated leadership and dedication to the potato sector, effecting change at the local, provincial and national levels. “She has a passion for working closely with the industry on challenging crop protection, pest management and production issues, both provincially and nationally, and does so through her involvement with the Canadian Potato Council and Canadian Horticultural Council,” says Gilroy. “Tracy is a wonderful ambassador for the potato industry. Her knowledge and experience is undeniable.”

Thank you to the Canadian Horticultural Council for sharing photos and notes from the evening.