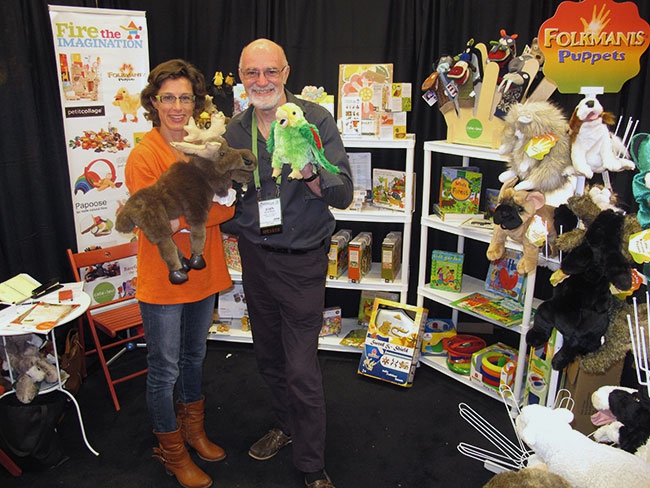 DECEMBER 2016 – There were a lot of smiling faces at this year’s Canadian Greenhouse Conference, held in the Scotiabank Convention Centre in Niagara Falls.

Organizers were definitely pleased with a sold-out bus tour of Niagara area greenhouses, a sold-out opening day banquet (The Gathering), and a sold-out – and expanded – trade show.

Attendance was up as the lecture halls were quite busy, including, for example, a standing room only lighting session. The trade show aisles were rarely short of browsing customers.

“Attendance was up significantly,” said trade show chairman Allan van Staalduinen. “Both days of the conference had more people than the previous years.”

This year the floriculture sessions were held in second level lecture halls, and there was minimal confusion.

“We have received positive feedback from both exhibitors and attendees on pretty much every facet of the show,” said van Staalduinen. “There were many comments about the quality of the speaker program and exhibitors were happy with the traffic on the trade show floor.”

He added that there seemed to be a positive buzz around the show, “which maybe speaks to solid industry growth and health.”

Here are some of the highlights.

BUS TOUR
The bus tour, as noted earlier, was full. It’s one of the main draws for many out-of-province attendees, and this year was no exception.

First stop was St. David’s Hydroponics, one of North America’s largest growers of greenhouse bell peppers with over 70 acres in production – and plans for a further 25 acres. The company was founded in 1985 and has incorporated the latest technologies. About 55 per cent of its production is trucked to the U.S.

St. David’s collects rainwater in ponds for use in its closed loop irrigation system. They have double screens, grow pipes and a driverless internal transport system. At the end of the season, their chopped plant material is sent to a local methane digester.

Next up was Sunshine Express Garden Centre, owned by Andy and Brenda Fluit. It’s open from March through to Christmas Eve, and draws customers from throughout southern Ontario.

They grow about 95 per cent of what they sell at their nearby production facility.

While competitive with big box stores on price, their main advantage is exceptional plant quality and customer service. “Our growing reputation is in every plant we sell,” is their slogan.

The store is big on signage, providing customers with great information. Word of mouth advertising is a great sales tool, and they get many repeat customers who jam the parking lots in peak season.

The store prides itself on being closed Sundays, “our family day,” as noted on the website.

The tour then visited W. Martens Greenhouse, a major cucumber operation. They are big believers in diffused glass, which was incorporated into last year’s seven-acre expansion. The farm has a total of 15 acres.

They are picking about six days earlier under diffused glass, with 10 to 20 per cent higher production overall.

The farm has a biomass boiler system that burns wood chips. The Martens like the system, but note it requires a lot of maintenance, unlike natural gas boilers where “you flip a switch and walk away.”

The tour then travelled to the Vineland Research and Innovation Centre, with a quick tour of several projects. Welcoming the group was Dr. Michael Brownbridge, research director of horticultural systems, who outlined the history and innovation mandate of the centre.

A unique tomato breeding program is well underway, and is a collaboration involving Dr. Amy Bowen, who heads the consumer insights team; biochemist Dr. David Liscombe; and vegetable breeder Dr. Valerio Primomo. Their research is focusing on the traits consumers find most desirable in tomato varieties.

Dr. Viliam Zvalo, a specialist in vegetable production systems, outlined his work with alternative crops, including eggplant. Grafting has been quite effective, he noted.

(One estimate says eggplant consumption is expected to increase 130 per cent by 2030 to 55 million kilograms, and much of the current supply is imported.)

Dr. David Gholami described some of Vineland’s sensor technology work, noting it will allow growers to monitor exactly what is going on in their plants.

The final stop on the tour was Northend Gardens, owned by Ted and Carrie Oorsprong.

The focus of our visit was on what is probably the most talked about new plant to debut in the North American market in many years – Medinilla Magnifica. They produce blooms of up to 18” in length and flower up to three months. It was named Best New Flowering Plant at the TPIE show in 2012, and is a show stopper wherever it is displayed.

It was a plant Ted had noticed during a visit to his uncle’s house in the Netherlands, and he was soon in contact with the breeder. “We introduced it to the North American market about five years ago,” Ted noted. “The market is growing.”

It’s a challenging plant to grow, he said, and they’ve received a lot of help from consultant Dr. Theo Blom. For example, the light levels here are much different than they are in the Netherlands.

Northend Gardens has produced all of its own marketing tools for the plant, and hosts an educational website (www.-medinilla.ca) and Facebook page to help consumers care for their plants.

EDUCATIONAL SESSIONS
This year’s keynote session looked at “The Future of the Greenhouse Industry – From Energy Consumer to Energy Supplier.”

Dr. Silke Hemming leads the greenhouse technology research team at Wageningen University and Research Centre in the Netherlands. The Dutch have set “high” targets for energy savings in the horticulture sector, she explained, and outlined the progress to date.

The goal is to have newly constructed greenhouses “climate neutral” by 2020, and the entire sector environmentally sustainable by 2050.

One focus is on the maximum use of natural sunlight, she explained.

The Dutch industry is also capitalizing on cogen where possible (70 per cent of the total greenhouse acreage), and is making good strides in studying the potential of geothermal heating.

Diffuse light materials are quite effective, resulting in yield increases of up to 10 per cent. Light is distributed more equally throughout the crop.

The “Winterlight Greenhouse” project is hoping to achieve 10 per cent more natural sunlight into the greenhouse in the October to March period. Innovation elements include the roof shape, orientation, angle and materials; diffuse cover materials and condensation control; screening systems; and crop strategies, such as high-wire cucumbers and cultivars that do better under low light conditions.

The “VenlowEnergy Greenhouse” is a highly insulated greenhouse that has already achieved savings of between 50 and 70 per cent in tomato crops compared to traditional commercial operations. Similar savings have also been achieved with cucumbers, and the researchers are now looking at sweet peppers.

In his first talk, he noted the importance of social media in connecting with millenials. Instagram is the fastest growing social media channel, he noted, and stores can benefit by using it.

Retailers are increasingly looking to online sales, and millenials are drawn to this.

It’s important to “engage the consumer” with events such as “make and take” workshops.

Fairy gardens are a serious trend, he noted, as are in-store coffee shops. The latter is much more common in Europe than it is in North America.

Fresh food retailing is another trend to watch.

With signage, be sure to include three characteristics of the plant in addition to the price.

“Our industry touches so many people in so many ways,” he said.

But while consumers love the products, they still have to learn how to use them. Display gardens are important, and he suggested setting up theme presentations, such as pollinator gardens, “moon gardens” with white or greyish plants that shine in the moonlight, winter gardens, and/or sensory gardens.

“Give visitors the wow factor with large displays of perennials.”

He suggested garden centres should include a healthy assortment of grasses, which are proving increasingly popular with consumers.

City harvests: Urban farming is another growing trend, particularly in the U.S. Offering his “Lowdown on Vertical Farming” was Henry Gordon-Smith, founder of the popular blog Agritecture.com. He’s also director of business development with Blue Planet Consulting, based in Brooklyn, New York.

He said the roots of urban farming go back to 600 B.C. with the Hanging Gardens of Babylon. And in 1909, the earliest drawing of a vertical farm was published in Life magazine.

One key to the growth of urban farming operations has been the price drop of LEDs, he said.

Most urban farming projects have a payback of between six to seven years, with some of only four to five years.

Vertical farming, he explained, is defined as the practice of producing food in vertically stacked layers, vertically inclined surfaces, and/or integrated in other structures.

“Some vertical systems are now being placed in supermarkets,” he said.

Plant extracts were probably the earliest biopesticides, with nicotine used to control plum beetles in the 17th century. In 1835, experiments using fungus (Beauveria bassiana) to cause infectious disease in silkworm were carried out. And in 1988, the first large-scale release of lady beetles to control scale in citrus was launched in California.

Bacillus thuringiensis was released in 1938 in France as the first commercially available bio-insecticide.

Biopesticide usage is increasing 10 per cent per year globally, with North America accounting for about 45 per cent of sales.

McCreary also discussed the differences between biopesticides and biostimulants. Biopesticides are designed for pest and disease management and are regulated by the Pest Management Regulatory Agency (PMRA). Biostimulants work to enhance plant nutrition, health, growth and productivity and are regulated by the Canadian Food Inspection Agency (CFIA).

Biopesticides are derived from natural sources, such as bacteria, fungi, plants, animals and minerals. They target specific pests or diseases, meaning less impact on beneficials. They prevent, or at least, delay resistance.

Other benefits include no worker exposure issues, short residue period and short restricted entry intervals, along with short pre-harvest intervals. They’re easy to integrate within any IPM program and can be rotated with conventional pesticides. Many have little negative impact on the surrounding ecosystems and human health.

McCreary emphasized the importance of using them at label rates only.

It’s important to include young people in visuals used in all your marketing materials.

Gardening in urban settings is much different than in suburban or rural settings, due to the smaller spaces available for plants.

Garden centres must be good sources of information for younger consumers who will need a lot of help getting started. An easy-to-navigate website is essential.

Retailers should also engage children and their parents in their programs.

New additions: The trade show, which was expanded this year, was sold out. Among new exhibitors was Fire The Imagination, which has a unique line of gift items geared to young people. The booth welcomed a steady stream of visitors over the two days, including John Stanley, who said the product line is ideal for garden centre retailing.

Next year’s conference will be held Oct. 4-5, again at the Scotiabank Convention Centre in Niagara Falls.