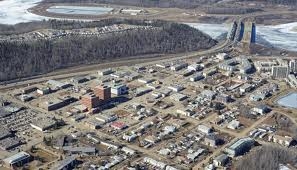 This image of Fort McMurray is from the website forum.skyscraperpage.com.

As more landfills look for ways to reduce the amount of garbage that is being accumulated, we are seeing more electricity being generated from landfill biogas, says 360 Energy’s Lisa Brodeur. “The most recent example is approval for a new system in Fort McMurray AB, where they will be using the heat and electricity to fuel a new on-site greenhouse.”

“In an effort to make their community more sustainable, Fort McMurray will look to feed its 100,000 residents from more local produce, while eliminating some of their solid waste issues. After completing studies on the viability of the greenhouse and its impact on greenhouse gases, the city discovered it could produce certain products at a substantially lower carbon footprint than importing them.

Taking tomatoes as an example, they could have fresh produce for about half a gram of carbon dioxide, while importing one from Mexico or California as they do currently, would equate to around 83 grams of carbon dioxide.

In the future, there are plans to expand this further, by establishing aquaculture facilities to harvest fish and then waste from the fish could be used to fertilize plants in the greenhouse. A little innovation and creative thinking gives Fort McMurray the chance to now have locally produced food, create a smaller carbon footprint and move towards their goal of eliminating the need for a landfill altogether in the future.

Taking well-known and understood concepts (waste to energy production) and putting a new spin on it (running a greenhouse) can create opportunities that were never even considered in the past.

Greenhouse operators can take the same approach, looking outside the box, and trying to identify ways they could be using what they have in a more efficient, cost- effective manner.

This state-of-the-art facility in Saint-Étienne-des-Grès is a 12-acre greenhouse complex heated with biogas from an adjacent landfill site. For  more, visit here.

Read the recent Energy Edge story on other greenhouse landfill gas projects (one in BC and one in Vermont) here.