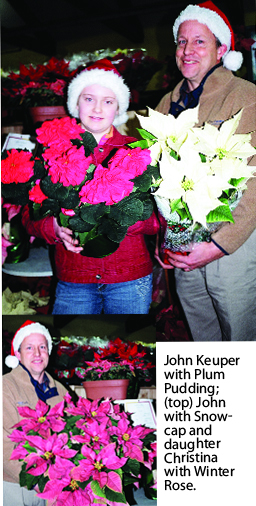 Pushing the limit on new varieties of poinsettias is part and parcel of marketing. Consumers are always looking for something new. But John Keuper, who operates Island Pride Farms greenhouses in Wood Islands, Prince Edward Island, has concluded consumers still prefer the tried-and-true traditional red varieties over any of the newcomers.

After completing horticulture studies in the U.S. some 17 years ago, Keuper came to the Island and set up his greenhouse operation. There have been a number of expansions since then. He began growing and selling poinsettias about six years ago and in the ensuing years, many new colours and styles have come along.
His plants originate in Guatemala where a great deal of the world’s poinsettias are grown. “That’s where the breeding starts and I get mine from a supplier in New Brunswick,” says Keuper.

With an extremely busy spring and summer of annuals, perennials, shrubs and trees to retail, in two locations, Keuper manages to find time for this seasonal addition to his retail market. His poinsettias are grown in a 27’ x 100’ oil-heated poly greenhouse. “The poinsettias fill one greenhouse.”

He tends to grow his poinsettias “longer and harder,” a system that for him ensures superior results. “They like the hot weather in the early stages, then in the fall and early winter, cooler temperatures keep the plant from “washing out.”

The plants are pinched in August, and by the end of September, the start of longer nights helps initiate the flowering response. Overall, he says temperature is the deciding factor in the colours. “The cooler weather gives them their intense colours.”

He began with 500 poinsettias and now grows 1,000 plants. His customers are intrigued with many of the varieties, especially their unusual names, including ‘Plum Pudding,’ ‘Strawberries and Cream,’ ‘Jester,’ and ‘Jester Jingle Bells.’ Customers can’t help but marvel at the uniqueness of the leaf patterns.

‘Winter Rose,’ with its scrunched up leaves, attracts a lot of attention and comments. “Customers either like it or hate it. It’s kind of grown on me with its different growth pattern,” he says.

His overall knowledge of plants is reassuring to customers. “They ask questions and say “Isn’t this gorgeous, or “Isn’t that cool,” explains Keuper.

Artificially coloured poinsettias are a tough sell in the local market. “All these new colours of yellow, blue, pink and so on, are actually dyed and consumers don’t seem to take to them. Maybe it is the P.E.I. market that is traditionally red.”

With this in mind, about 75 per cent of his poinsettias are red varieties.

Selling during the holiday season means competing with florists and Keuper says he was fortunate in 2006 when some shops did not have as particularly nice plants to offer as he did. Consequently, he was able to get his plants into at least one supermarket in 2006.

Further efforts were disappointing. Supermarkets, he’s found, prefer to buy through a central broker. “They don’t get the full value of a poinsettia in those places.”

Promoting his many varieties at the Charlottetown Farmer’s Market throughout November and December may not be a major revenue stream, but he says it’s something he does for his children, to incorporate a tradition of the holiday season within the business.

Plus, it is personalized customer service that the consumer won’t get when buying from a huge retail outlet. Keuper offers tips on keeping the poinsettia throughout the holiday season and beyond, suggestions to do with sunlight level requirements, keeping the plants out of drafty areas, maintaining a constant temperature, and supplying just the right amount of water.

Selling at the market late into the holiday season ensures last-minute shoppers aren’t disappointed. Whatever is left at closing time on Christmas Eve is taken to a church or nursing home where there may not have been a lot of decorating money available.

And forget about the notion the poinsettia season ends with Christmas. Keuper was called upon to supply poinsettias for a New Year’s Eve wedding a few years ago.
• www.islandpride.ca