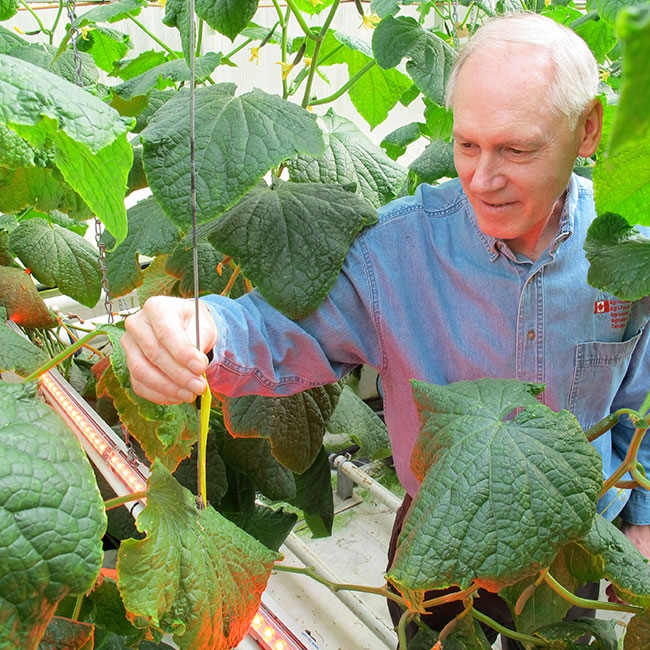 Shipp has recently been studying the effects of supplemental lighting on greenhouse insects, both predators and pests.

February 2015 – “Les Shipp’s research has led to many really important advances in the IPM of pest insects. These include decision support and IPM tools used in industry today, including monitoring and sampling protocols and injury and action thresholds.”

“There’s a lot I’m going to miss,” he said during our interview in his longtime office at the Greenhouse and Processing Crops Research Centre of Agriculture and Agri-Food Canada in Harrow, Ontario.

At the top of that list would be his many research colleagues and project collaborators.

“Greenhouse pest management is so dynamic and is always changing so quickly. You have to stay on top of things and what others are doing. I’ll miss the networking with colleagues worldwide.

“If ever I had a question, I could email someone and get a response almost right away. A lot of friendships have developed in working with colleagues throughout the world.”

The networking keeps your work current, he explains.

He has been involved with the International Organization of Biological Control (IOBC) for much of his career. He served about 10 years on its executive, including two years as president of the North American section.

He’s always taken a systems approach with his work, studying how things integrate with one another in the greenhouse. It was important to learn all aspects of greenhouse production.

“If I was to do a good job in pest management, I needed to know a little about the basic growing practices and disease management because everything is so integrated in the greenhouse.”

Shipp did all his undergraduate work at the University of Guelph, with considerable work with mosquitoes. He attended Iowa State University to complete his PhD studies.

He joined AAFC in 1980 at the Lethbridge, Alberta, research station. His focus then was with blackflies and cattle.

In 1987, he transferred to Harrow when greenhouse pest specialist Dr. Bob McClanahan retired. McClanahan, along with Harrow colleague Dr. Robert Jacques, were pioneers in biocontrol research.

Clem Fisher was the Ontario Ministry of Agriculture, Food and Rural Affairs (OMAFRA) greenhouse specialist back then. “He introduced me to many of the growers,” said Shipp. “It was important for me to talk to them to get a baseline of what was going on with pest management in the industry.”

Chemical pesticides were the main control measure used when Shipp began at Harrow, but that all changed when western flower thrips entered the scene. Thrips developed pesticide resistance quite quickly, and that provided much of the impetus to switch to biocontrols.

Growers enthusiastically embraced biocontrols. “Growers saw that this was the future and they wanted to get away from chemical controls.”

Europe was at that time leading the way in biological control products. The challenge for the Harrow researchers was to modify and adapt those protocols for the Ontario climate.

“We have a continental climate here, with very cold winters and very hot summers with quite humid conditions. It’s not the same sort of conditions you’d find in the Netherlands.”

Applied research has always been at the forefront. Growers wanted solutions they could use right away.

Neoseiulus cucumeris was one of the first predators he studied, and it remains a valuable tool for growers.

Shipp was part of the team that developed the Harrow Expert System for Greenhouse Vegetables, a multidisciplinary approach involving all aspects of crop production, including climate control, identification and management of pests and diseases, greenhouse climate, etc.

Shipp has spent a lot of time looking at economic thresholds – “what economic damage do these pests do to the crop” – so growers would know the correct timing for applying biologicals.

He has also done a lot of work with Beauveria bassiana, a fungus that grows naturally in soils throughout the world that is a parasite on various arthropod species. He began his studies in the late 1990s, initially to help get the product registered.

In the early 2000s, he began researching bee vectoring in close collaboration with Dr. Peter Kevan of the University of Guelph, and a number of graduate students. Kevan had previously worked with U of G colleague Dr. John Sutton on bee vectoring and disease management in field strawberries.

“We’ve been able to take that technology to the point where it is commercially available and used by greenhouse growers,” said Shipp. “We’re now able to use the bees being used for pollination purposes to deliver microbial agents.”

Beauveria was the first microbial used with this system.

More than just fungi, the bees can also deliver such agents as Bacillus thuringiensis (Bt) for cabbage looper control in pepper and tomato crops.

Recent work has also looked at applying a baclovirus to control cabbage loopers. The virus was developed by an AAFC scientist at the Saskatoon research station, who isolated it from cabbage loopers in British Columbia. It’s specifically an insect virus and doesn’t affect plants or animals. “It’s only pathogenic to insects.”

A company is now applying to register the product. Once it is registered, the Harrow team can work on label expansion for bee vectoring. Some trials have already been carried out.

Bee vectoring has since advanced to disease control trials.

“Bee vectoring will never be a sole control measure. It has to be integrated with other control practices.”

The key to its success is to be proactive, “to get out there a little ahead of any problems, to allow the bees to disperse and put the inoculant throughout the crop.”

Harrow’s accomplishments with bee vectoring are such that scientists from Korea and China, among others, have visited the centre to learn the technique.

More recently, Shipp has looked at the effect of supplemental lighting on pests and beneficials. The industry is increasingly moving towards year-round production by utilizing HPS and LED lighting systems. Their effects vary on insects.

“It’s not an across-the-board effect on them. The effects are quite variable, but we now have some good baseline data that I’ve collected in collaboration with colleagues in Norway and Finland.”

AAFC colleague Dr. Dave Gillespie, at the Agassiz research centre, has collaborated on many projects.

“In my view, Les Shipp’s research has led to many really important advances in the IPM of pest insects in the greenhouse industry. These include decision support and IPM tools used in industry today, including monitoring and sampling protocols and injury and action thresholds. He developed and refined approaches to managing key pests such as western flower thrips and invasive pests such as the tomato pinworm. His work on effects of temperature and humidity within the crop canopy improved rearing, shipping and application methods for many biological control agents. He led the research community in the integration of traditional and low-risk pesticides with biocontrol-based IPM programs.”

Shipp has recently been studying the effects of supplemental lighting on greenhouse insects, both predators and pests.

Shipp’s research has primarily focused on vegetable crops, but he has also done considerable work with ornamentals in recent years. Projects have included the use of trap plants and the application of nematodes. A lot of ornamental growers are using biocontrols as a first line of defence for thrips control, he explained. “Chemicals are now the backup control, and not the other way around.”

AAFC colleagues that he’s worked closely with over the years include Drs. Bill Jarvis and Tom Papadopoulos at Harrow, Dave Gillespie in Agassiz, B.C., and Bruce Broadbent in London.

Among early biocontrol specialists he worked with was Don Elliott of Applied Bionomics.

Dr. Rose Buitenhuis, now a scientist at the Vineland Research and Innovation Centre, worked with Shipp for a number of years at Harrow.

“I’ve worked with Les from 2004 to 2009, doing two post docs with him. All projects were around finding more tools (such as trap plants) and refining strategies for existing biocontrol agents (nematodes, predatory mites) for thrips IPM in greenhouse floriculture. At Vineland I continued our collaboration, especially regarding research on predatory mites. Under Les’ mentorship, I learned everything a researcher needs to know. His research has greatly advanced greenhouse biocontrol in both vegetables and flowers. He has always been open to try new things, and solve pest problems with a different approach.”

Shipp’s most recent projects have included

As a speaker, he’s literally travelled the world sharing his knowledge at conferences and workshops.

He’s an adjunct professor at the universities of Windsor and Guelph.

Shipp’s retirement means the loss of a true innovator in greenhouse pest management, both in Canada and internationally.

“Very concisely,” noted OMAFRA’s Gillian Ferguson, “I would say that Les always tried to address practical grower issues in his research program. He was very thorough in his investigations of pest and biocontrol issues and in addressing them.”

He will now have more time for family and travel, and many more hours to work on his already quite impressive golf game. He’s an accomplished amateur golfer who enjoys tournament play throughout Ontario when time permits.

And he now has much more time for scorecards instead of sticky cards.