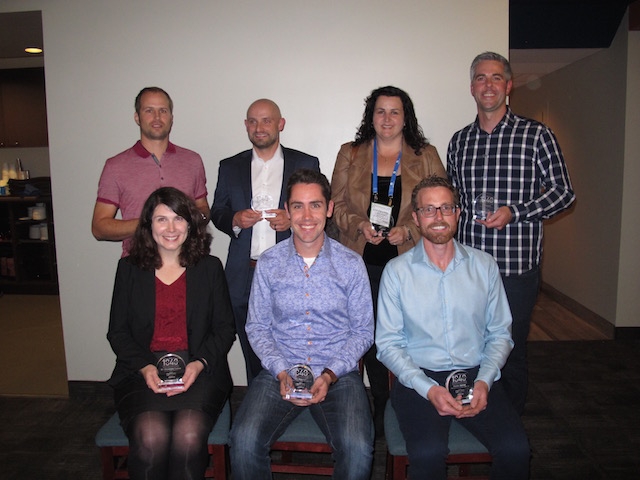 Greenhouse Canada’s Top 10 Under 40 award winners for 2017 were announced tonight at The Gathering reception of the Canadian Greenhouse Conference.

Paul Boers Manufacturing and Prins Greenhouses are the program sponsors.

This is the fourth year for our Top 10 Under 40. The award winners will be featured in the November edition.

Dr. Chevonne Carlow is the greenhouse floriculture specialist with the Ontario Ministry of Agriculture, Food and Rural Affairs (OMAFRA). Her background includes many years of working with different plant species, most notably while studying the effects of light on young plant development and the effects of temperature on plant stress responses.

In her role as the greenhouse floriculture specialist she has visited numerous operations in Ontario to understand their issues, and provide knowledge and guidance to improve their production.

She has interacted with many individuals from various OMAFRA departments and provided her expertise to help develop policies, programs and research initiatives that will help the Ontario greenhouse sector address various issues and remain economically viable.

Will Heeman has been a driving force at Heeman’s Garden Centre (Thorndale, Ontario) since returning to the farm full-time in 2010.

He’s brought new ideas and a customer focused mentality that’s transformed this retail greenhouse into a must visit destination within the region. In part, thanks to his efforts and marketing of the business, the store has enjoyed a doubling of sales in only seven years – a great accomplishment for an operation that’s been in business for 54 years.

In June of this year, he spoke on Marketing to Millenials during the Greenhouse Canada Grower Day. He is also on the program here at the Conference this week, talking about social media.

Heeman was named Young Retailer of the Year in 2016 by Green Profit magazine. The judges remarked that he is the “whole package” and “someone to watch” in the industry.

Scott Holmes is the the CEO and founder of ET Grow (Beamsville, Ont.).

Holmes has a strong work ethnic and leads by example. He regularly attends industry trade shows, such as the Canadian Greenhouse Conference, and a host of other industry events.

Colleagues say he is hardworking, trustworthy and shares the industry focus of continually driving towards higher goals and doing it affordably.

An important company value is its dedication to philanthropic initiatives. “Whether our team may provide assistance in areas of our expertise (such as web site development) or lending a helping hand, giving back to the community is an area Extreme Technology prides itself in,” notes the company web site.

Holmes received the Young Professional of the Year during the 2013 Niagara Business Achievement Awards ceremonies.

Dejan Kristan is the marketing director with Flowers Canada Ontario. He has worked with Ontario’s greenhouse floriculture industry since 2015, first as an independent contractor and now as an employee with FCO.

With Flowers Canada Ontario, Kristan has been responsible for guiding the impressive growth of the pickOntario brand, and re-envisioning marketing strategies to keep consumers buying Ontario flowers.

Under his direction pickOntario’s social media presence has grown from under 1,000 followers on Facebook to over 26,000 today. He has created promotional videos that have been viewed over 600,000 times.

He has also created viral marketing campaigns that have subsequently been copied in both the U.S. and the U.K.

She is a grower representative with the Ontario Greenhouse Vegetable Growers and has been an active member of its food safety committee for many years.

She was selected as a delegate accompanying OGVG to Shanghai and Hong Kong on three different produce missions. The goal of the missions was to explore opportunities for new markets, represent Canada and its Ontario growers, and to educate Chinese government officials about the Ontario industry.

In 2011, Lariviere was recognized by CPMA as a rising star in the produce industry through its Passion for Produce program.

In 2013, she was the recipient of the Mary Fitzgerald Award for her on-going leadership, passion and involvement in the produce industry.

Mastronardi has been very active in researching trends and opportunities for the greenhouse industry and has been involved in all aspects of growing, packing and distributing of greenhouse vegetables.

Most recently, he was very instrumental in the development of Red Sun Ohio, the company’s first greenhouse with supplemental lighting.

Outside of the company, he has been fully engaged with helping develop a hydroponic greenhouse program at Ohio State ATI. He is on the advisory committee of the greenhouse and nursery management program of Ohio State University’s Agricultural Technical Institute.

Closer to home, he recently joined the Windsor Essex economic development board of directors representing the greenhouse industry.

Jim Meyers leads sales, transportation, purchasing and administration at Meyers Fruit Farms and Greenhouses, a family owned farm and greenhouse located in Niagara-on-the-Lake. He enjoys the opportunities and challenges the business brings while helping to lead it into its third generation of ownership.

Colleagues praise his leadership abilities, and his positive people skills in helping employees rise to their full potential. He has been a key driver in the steady growth of the company that has seen sales more than double over the past 10 years.

He has been a panelist at both the International Floriculture Expo (formerly Superfloral) and the Ontario Fruit and Vegetable Convention.

Most recently, Meyers outlined the “Ingredients of a Successful Farm Business” at Greenhouse Canada’s Grower Day this past June. Making a family business work and be successful includes good organizational planning, specific responsibilities, enthusiastic teamwork and positive attitudes all around, he noted in that presentation.

Dustin Morton is a commercial horticulture specialist with Alberta Agriculture and Forestry. He is a key resource and supporter of the Alberta Greenhouse Growers Association and the Alberta Farm Fresh Producers Association.

Morton has a great passion for the industry and it shows in all he does, right from answering grower questions, organizing events/conferences and helping book speakers for industry conferences.”

His passion for the industry shows in the fact that he also is running Parsnips and Paddocks, the Community Shared Agriculture farm near Wetaskiwin that he and his family operate.

Morton organizes province-wide tours of greenhouses for growers. He is well known for encouraging new growers to take chances with new technology and for linking growers to industry officials he knows can help them.

Max Saad is director of procurement with Mastronardi Produce (Ruthven, Ont.) and has been in the greenhouse industry his entire professional career.

He began working at Mastronardi Produce at their Mastron Greenhouse. Over the years, he grew with the company, quickly becoming an expert in each area in which he worked, from growing to quality control to procurement.

In 2014, he was selected by company president and CEO Paul Mastronardi to represent the company in the Passion for Produce program of the Canadian Produce Marketing Association to help grow his professional career.

In addition, he completed the Emerging Leaders Program through the Produce Marketing Association.

He is also part of his company’s internal leadership team that collaborates regularly on long-term business strategies.

Learning all of his horticultural skills on the job and his managerial skills through two years of business education from Red Deer College, Tiemstra brought his knowledge to the forefront when he started in his role as a partner in the business.

Of particular note, his single most outstanding accomplishment was in 2016-2017. Gull Valley has the distinction of being the first farm to build and operate an LED lit greenhouse in Alberta. This shows his leadership in the industry and his willingness to take risks in the effort to supply fresh vegetables in the winter.

Produce from Gull Valley goes to several farmers markets and to Pik-N-Pak Produce in nearby Lacombe.

Gull Valley is mastering the art of growing greenhouse vegetables under LED lighting, and Levi Tiemstra is playing a large role in that success.