Some 350 growers enjoyed a preview of some of next year’s top garden performers at Idea Day 2006. The daylong event was co-sponsored by JVK and Sobkowich Greenhouses. Considerable note- and picture-taking were the order of the day, as the varieties were studied in great detail. 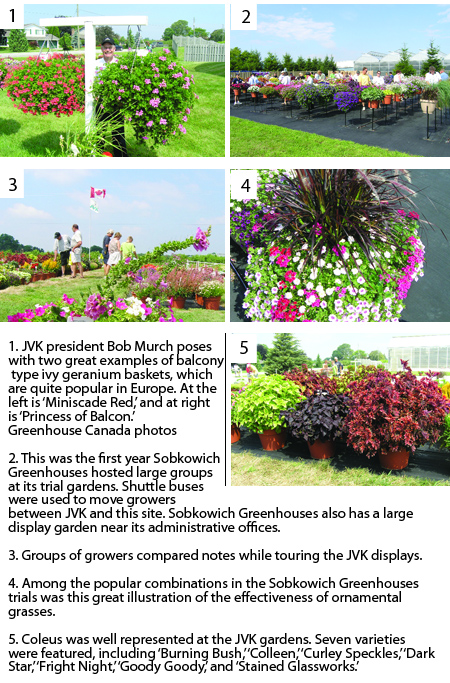 Some 350 growers enjoyed a preview of some of next year’s top garden performers at Idea Day 2006. The daylong event was co-sponsored by JVK and Sobkowich Greenhouses.

The expansive gardens at each location allowed growers to view hundreds of new varieties in garden or container applications. Considerable note- and picture-taking were the order of the day, as the varieties were studied in great detail.

The JVK display gardens have long been popular with growers and retailers, according to company president Bob Murch.

While hosting a grower day in July each year is a company tradition – some 350 attended this year – the St. Catharines site is rarely without visitors, he explained. Many other groups, including individual growers, grower groups, and retailers, including big box stores, schedule visits throughout the summer to view the mix of new introductions and proven performers.

“Growers who view the trials come from coast to coast,” said Murch. “Growers from British Columbia to Newfoundland, and various areas in between, as well as many regions in the United States, view the gardens either on their own or in scheduled groups.”

The JVK gardens have about 1,000 containers in total, consisting of 150 mixed units and the remainder with single varieties.

New this year was a shuttle bus service to Sobkowich Greenhouses in nearby Grimsby.

Established in 1964, Sobkowich Greenhouses has grown from a three-house seasonal tomato hobby operation, to a 160,000-square-foot, year-round wholesale business. It is one of three licensed Canadian propagators of Proven Winners® varieties.

Vice-president Ed Sobkowich Jr. says they’ve had trials for about five years, generally hosting small groups of customers and brokers. This was the first year they’ve opened it to such a large group, and they were quite happy with the response.

The trial gardens included hundreds of containers presenting many new and time-tested Proven Winners varieties. This year’s trials featured 320 varieties and combination mixtures, and of those, about 40 were new items for the 2007 season.