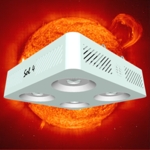 Traditional LED grow lights are made with an LED chip and a small acrylic lens bonded over the chip to help focus light. Modern grow lights take this a step further by using a secondary acrylic or glass lens over the primary lens to re-focus any light the primary lens was unable to direct. While acrylic and glass are great at shaping light, the downside is that each layer blocks up to 10 per cent of the light from the chip.

Hydro Grow’s Sol LED Grow Lights are designed to eliminate these light blocking layers, and instead use a custom-developed parabolic reflector to direct light.

Unlike a lens, a parabolic reflector goes around a light source rather than over it to direct light in a set dispersion pattern. The deeper and wider the reflector, the better light can be shaped by the reflector. Standard reflector depths for 50 to100W integrated LEDs range from 11 to 18mm deep; the new Fusion reflector used in Sol is 25.4mm deep, making it the deepest LED reflector on any multi-LED grow light in the world.

The Sol light also employs a copper plate to flow heat away from the light-providing LED chips – a design feature intended to improve performance and longevity.

The scheduled release date for the Sol LED Grow Lights is March 31, 2013, however Hydro Grow is now accepting pre-orders.