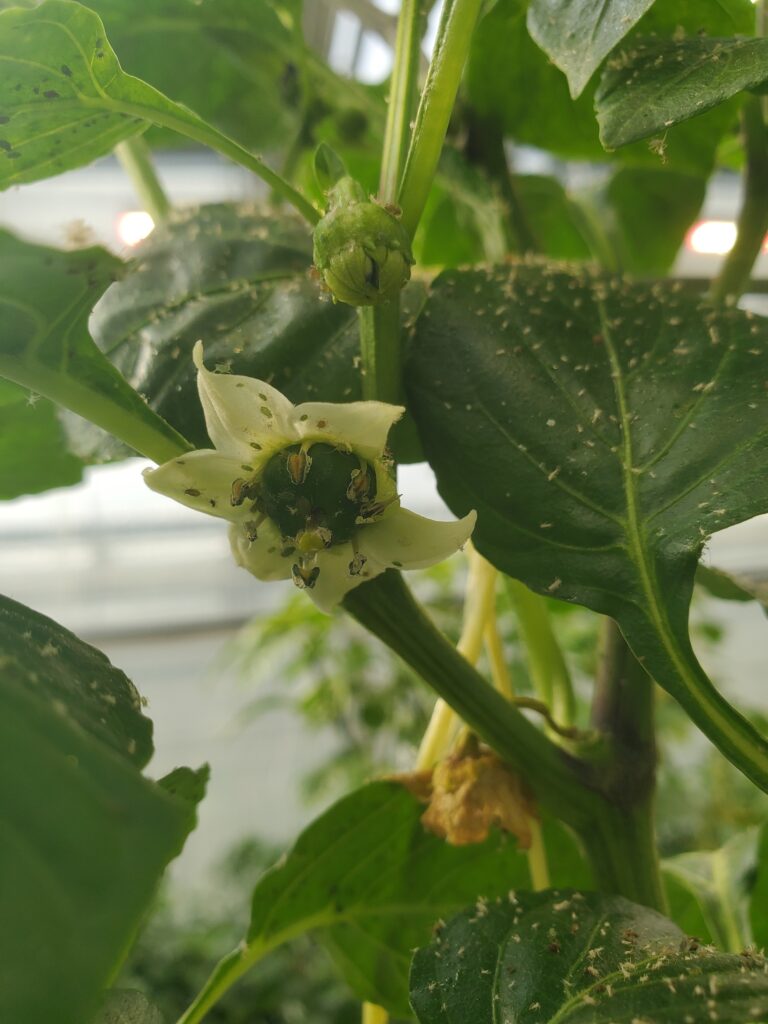 With Sollum’s dynamic LED grow lights, growers can easily modify their photoperiod, light intensity, light spectrum and lighting zones at any time. This means that supplemental lighting is no longer a simple ON/OFF switch but can be used to assess how light affects different insects and mites in the greenhouse. Then, lighting can become a tool to manage these species.

In this white paper, we focus on integrated pest management (IPM) and how dynamic lighting can be another weapon in the IPM toolkit.

What is integrated pest management?

IPM is a holistic approach to managing insects, mites and diseases in the greenhouse. This is done through a combination of cultural, physical, biological and chemical practices, with chemical use typically being the last resort. In recent years, biological control of greenhouse pests has become the shining star of pest management. Rather than eliminating insects, mites and pathogens from the greenhouse, IPM brings in predatory or parasitic species to manage pests and diseases. 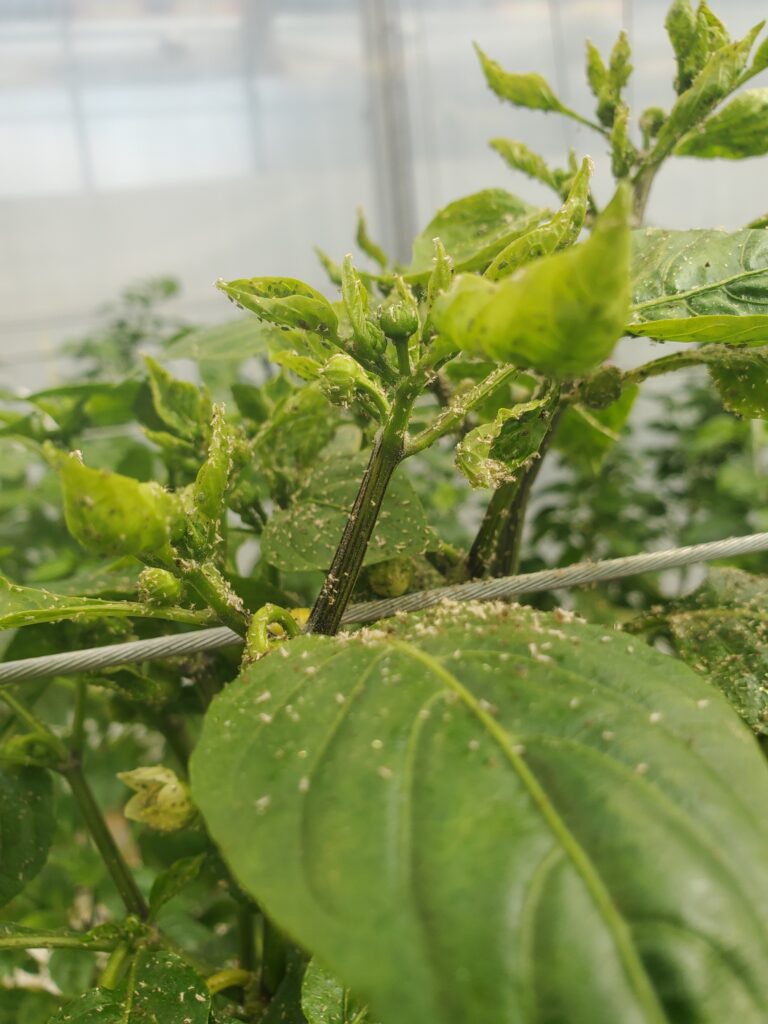 Light-assisted IPM – is it possible?

Effect of photoperiod on diapause:

When greenhouse conditions are unfavorable to insects and mites, many species enter diapause. This dormant state can be triggered by temperature, photoperiod, low food supply, population pressure and the presence of predators.

Of these, photoperiod is considered the strongest signal as it indicates the arrival of the winter season (Bryon et al., 2017). For the classic greenhouse crops (i.e., cucumbers, tomatoes, peppers and strawberries), a photoperiod of 16 hours is typically recommended. This is above the diapause threshold of most greenhouse pests and biologicals, so most species will not enter diapause. While greenhouse pests may not enter photoperiod-induced diapause, growers also need to think about their biologicals’ diapausing behavior.

For example, Orius insidiosus is highly effective against thrips during the summer but is notoriously difficult to establish in a greenhouse during the winter. However, supplemental lighting may make it easier to use Orius for winter production as growers will be able to provide the necessary photoperiod. Recent work by OMAFRA showed that while Orius develops rapidly under summertime conditions, females lived longer and produced more eggs under supplemental LED lighting for 20 hours. The researchers also reported that Dicyphus lived longer under high-intensity LED lighting (Labbé and McCreary, 2020).

Takeaway: When transitioning towards lit production, it is important to communicate that to your biologicals provider and discuss which biologicals will perform well under supplemental lighting. For now, most of that focuses on applying the appropriate photoperiod to keep your biologicals out of diapause. In the future, we expect this to be finetuned according to light intensity and spectrum.

Various studies have explored the effect of light spectrum on greenhouse pests’ behaviors. Most insects and mites that we come across in greenhouse settings reportedly have trichromatic vision and are most sensitive to blue, green and ultraviolet light. For example, a study found that two-spotted spider mites may be driven to enter diapause under blue light (Suzuki et al., 2008). Another study then looked at western flower thrips and reported that thrips settled more under blue light and were possibly less active, whereas green wavelengths were linked to more feeding on leaves (Stukenberg et al., 2020).

What about my sticky traps?

The debate between blue and yellow sticky traps is ongoing, with yellow traps currently being the most used although some growers prefer blue sticky traps for thrips. However, studies show that pests’ attraction to sticky traps may be affected by the type of supplemental lighting. In other words, the color and intensity of supplemental lighting can impact pests’ perception of the sticky trap. Looking at the western flower thrips, OMAFRA studied how thrips respond to sticky traps under HPS and LED lighting (50% red, 50% blue). The researchers found that under HPS lighting, thrips numbers were highest directly under the light fixtures but decreased on the fringes of the HPS zone. Under 50R50B LED lighting, thrips numbers were higher at the edges. Thrips’ attraction to the traps also depends on the weather. Under cloudy conditions, thrips in the LED treatment preferred yellow traps over blue ones. 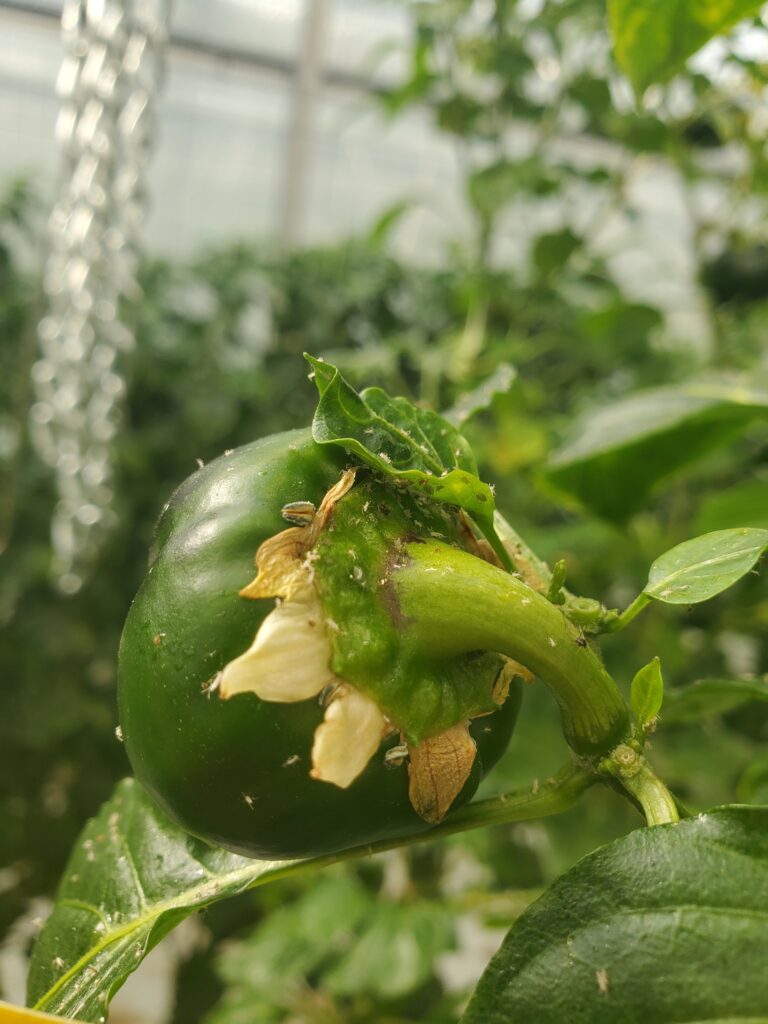 Figure 2. Aphids and thrips feeding on young pepper fruit, stunting its development and leaving marks on the fruit skin.

Knowing that pests and biologicals adapt their behavior according to light conditions, the question then becomes: “How can supplemental lighting be used as another tool in IPM?”

Taking the two-spotted spider mite as an example, research shows that females undergo reproductive diapause under short-day conditions and slow egg development. Bringing light into the equation, a study by Suzuki et al. (2008) found that blue light could induce diapause and suppress mating behaviors of spider mites. That said, diapause also makes insects and mites more resistant to IPM and environmental stresses. This emphasizes the point that dynamic lighting is about striking a balance in the greenhouse environment. In this case, a potential light-assisted control strategy could look like:

Furthermore, dynamic lighting allows growers to create and recreate lighting zones at any point. For light-assisted IPM, this means that the grower could create a light zone over the infested area alone to keep the pest from spreading into the rest of the greenhouse. Let’s take our spider mite example again. If we notice the beginning of an infestation in one part of the greenhouse but not in the others, the grower can create a light zone over the affected area and only apply the light strategy there, if desired.

As the only LED provider that offers a truly dynamic solution for growers, Sollum Technologies allows growers to adapt their lighting strategy at any point and to potentially use dynamic lighting as a pest management tool. Research into the potential of dynamic lighting is underway with both industry and academic partners, meaning that growers who choose Sollum Technologies as their lighting provider also gain the support from our partners and their cutting-edge research, as well as Sollum’s evolving catalogue of light recipes.