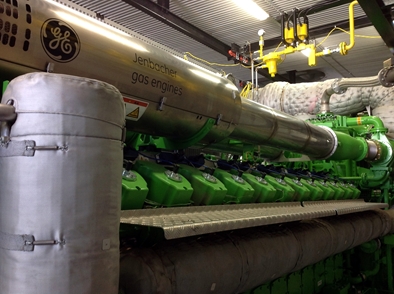 The CHP generators at Houwelings in California.

Summarized from the press release:

Fueled by natural gas, Houweling’s new CHP system provides 8.7 MW of electrical power and 10.6 MW of thermal power (hot water) for heating the large-scale glass greenhouses. The system offers a total thermal efficiency of nearly 90 percent. When considering the avoided energy that would be required to externally source the CO2 and the recovery of the water from the exhaust, the overall system efficiency exceeds 100 percent.

The concept of a power plant being able to generate heat and power at nearly 100 percent overall efficiency is made possible by condensing out water vapor created in the combustion process. Thermal energy is recovered in exhaust gas heat exchangers for use in the greenhouses, which utilize very low water temperatures in their heating systems to cool down exhaust temperatures below the dew point. The water condensed out of the exhaust gas will save approximately 9,500 gallons per day. 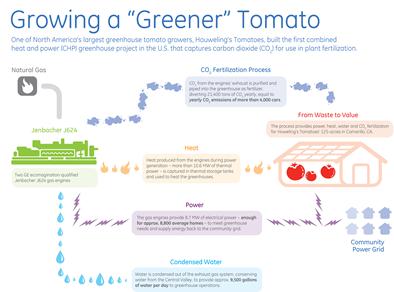 The CHP plant will enable flexible generation and contribute electric power during peak daytime demand periods. With a five-minute start-up capability, this plant also provides power to the electric utility for augment of the power grid. It contributes to California’s goal to generate 6,500 MW of new CHP generation by 2020.

Ventura County required the installation of best-available pollution control technology for the CHP plant. The NOx emissions have been limited to a maximum concentration level of 5 ppmv. This represents a reduction from Houweling’s current boilers, which are limited to a maximum of 40 ppmv NOx. Houweling’s invested in a COdiNOx-Selective Catalytic Reduction system to achieve air pollution targets.