Features Structures & Equipment Water and irrigation
Hot off the press

May 11, 2009  By Niagara Economic Development Corporation

Hot off the press
A key industry resource for the Ontario industry has recently published its
16th edition. The 2009 Ontario Greenhouse Growers’ Directory & Buyer’s Guide. 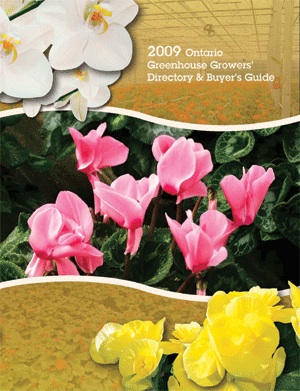 May 11, 2009 — A key industry resource for the Ontario industry – and a major fundraising tool for greenhouse research – recently published its 16th edition.

The 2009 Ontario Greenhouse Growers’ Directory & Buyer’s Guide is distributed to all sectors of government, trade and industry associations, and the wider buyer and seller community throughout Canada and the U.S. A small number are also circulated overseas upon request.

It is published by the Niagara Economic Development Corporation. Some 5,000 copies of the 2009 edition were printed.

This increasingly popular and widely dispersed publication has been in production for 16 years. It is often been cited as a key publication providing information on the scope of products from the provincial greenhouse industry.

The NEDC was involved with the third annual “Ontario Boulevard” at the Super Floral Show held in Atlanta in June. The NEDC displays promote the “Profit With Ontario” message.

It also participated in the Wholesale Florist & Florist Supplier Association’s Annual Convention (WFFSA) in Orlando in April, and will be at the Canadian Greenhouse Conference in Toronto on Oct. 7-8, among other industry events.

Through the Cecil Delworth Foundation, which matches funds with government programs, the NEDC’s $165,000 in donations derived from the Directory since 1994 have contributed to more than $1.6 million of floriculture research for Ontario growers.

A printable version of the Directory is on the NEDC website at
http://www.niagaracanada.com. It has been posted under Agribusiness within Key Industries.

Related
Inside View: Managing your farm’s other water resources
The Dose Size Factor
Looking to the land
Ontario to make it easier to dispose of nutrient feedwater