This year’s Sawaya Garden Trials had higher than normal temperatures, followed by lots of rain two weeks before the open house. Which flowers did well and which didn’t? Find out. 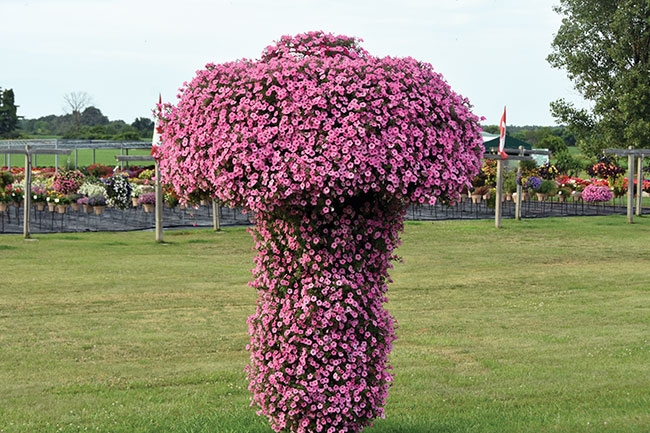 This year’s garden trial open house had over 2700 varieties and drew over 400 visitors.

Summer 2018 weather was a true test of garden performance in plants. Temperatures were hotter than normal since the beginning of June, so more care was required for plants that were coming from the greenhouse and into direct sun. After the plants were established, the drip system was great.

Warm leaf temperatures and cool well water with continuous fertilizer made the plants explode with growth. Then the rain started two weeks before our open house at the Sawaya Garden Trials, and that put all the petunia varieties to the test. You could see the varieties that stood up to the rain, the ones that recovered fast and the ones that were invaded by botrytis or just refused to wake up.

Some like the lantanas, angelonias, portulacas, and scaevola were slow at the beginning of the summer but picked up very fast mid-July. The double flower impatiens were like miniature roses and had no downy mildew in our trials. No downy mildew was prevalent on the other walleriana impatiens.

The summer heat was too much for the nemesia and diascia. Osteospermum flowered through the whole season so we should stop labeling it as just for cool temperature weather, but promote it for the whole season. Heat-loving crops like lantana, angelonia, portulaca, and dipladenia do excel in hot weather, and I know from other years that they do not mind cool temperatures.

In order to get any benefit from the trials, we need to learn from them so we can apply it to the next season. It is time to get the horticultural industry on a progressive track that puts the success of the consumer as its top priority. Carrying products that look good on the store shelves and knowing that this product will not perform for the consumer is a total disgrace and lacks integrity. This past summer, the downy mildew on walleriana impatiens did not show up, so some growers jumped to the conclusion that we are to start growing impatiens walleriana again. Yes all that is grown will be sold, as long as a small fraction was grown. But remember that July 2015 season when impatiens walleriana was wiped out by downy mildew. This year, due to the lack of many impatiens grown, the fungus was not able to move from one flower bed to another. The far distances between the beds as well as the dry hot early season kept the fungus at bay. However, this is short sighted because the consumer who buys the impatiens walleriana, takes it home and has it die prematurely on them, will shop somewhere else or worse, give up on gardening.

Most of the time when we go to trial gardens we look for varieties that are good performers – which is great. What is more effective is to look for the non-performers, eliminate them from our program and send a message to the supplier.

The main purpose of the Sawaya Garden Trials is to see the varieties that perform best in our climate. For the past 17 years we have seen some genera perform well and others not quite so much. The calibrachoa increased in production by over 1000 fold, not only in Ontario, but in Canada overall. This drastic increase is due to its excellent garden performance, and the excellent show it puts on from early spring to late fall, as long as we are able to fertilize on a regular basis with every watering. The next genus that is increasing in demand faster than the supply is the Begonia boliviensis which showed an increase of at least 20 per cent from the year before, and with the new varieties, I predict there will be a 20 per cent increase every year for the next three years.

All Sawaya trial plants were donated to charity. The people who came were amazed by the quality of the plants, and were happy to pay $20 a pot for annuals even on August 20. So why are gardeners not getting the full potential beauty out of their plants?

The answer is simple; we are not communicating the information effectively to the ultimate consumer. Unless we are planning to shrink our sales by 2.5 per cent every year, we’d better get together with our buyers (store, garden centre) and official representatives of the greenhouse industry to educate the consumer. This is in addition to doing our homework in selecting the best garden performing varieties.

Here are some steps I’ve mentioned in the past few years that can help increase our sales. Normally it takes five years to adopt change, so it’s worth mentioning again:

Highlights from our trials this summer

Remember, if you have never grown any of these varieties before and would like to, just grow a small percentage to evaluate its success and consumer appeal, then you can decide to increase production or drop this variety. If you decide to increase production of a new variety after trialing it for a season, make sure you take a good look at which variety you can drop.

With the popularity of calibrachoa, you can now choose colour, size and habit. Breeders are doing a good job of classifying the series according to their habit, which helps in deciding container size for the variety. Different types of flowers add to the popularity of the calibrachoa, from star-shaped bicolour flowers and different colours along the flower margins, to colours that change with age. Since calibrachoa is taking a bigger share of the market while other varieties are on the decline (this varies with different markets), it is prudent to decrease the production of the cultivars that are not selling as they used to.

This year’s weather was an excellent test for petunias. At the beginning of the summer, the hot weather and drip irrigation made the plants grow faster than normal, followed by rain for many days. After the rain, many petunia varieties collapsed and never went back to what they were before, while others recovered with some damage, and some stayed looking great the whole time.

This year’s garden trial open house had over 2700 varieties and drew over 400 visitors.

Here are my observations of the petunias:

All calibrachoa series are getting much better year after year, and the breeders are describing their series much better, so the growers choose the habit they are looking for. There are very compact calibrachoa series, with compact, medium and vigorous growing habits. There are mounding and trailing growth habits, in addition to whether they are day-neutral or not. I look for plants where the flower power and branching power are balanced because that is what will give long plant performance. An example of a habit like this is Calibrachoa Unique.

Golden Yellow (7) keeps branching, setting sites for the next flower bud set. That is what gives it long garden performance. Usually plants of this habit are more resistant to diseases since they are genetically active growers. This calibrachoa and most others are excellent for hanging baskets and great in combinations.

Calibrachoa Superbells Double Chiffon (8) is a mounding-type calibrachoa that has great garden performance for an exceptional show. Best in large hanging baskets.

Calibrachoa Superbells Lemon Slice (9) is a calibrachoa that does not need to be mixed with other cultivars because on its own, there is a show of yellow with striped flowers. It is one of my favorites. I like the colours in addition to its garden performance.

Geranium Calliope Large Burgundy & Large Red (10) are two interspecific varieties supposedly of the same family, but in plants like humans, being in the same family doesn’t necessarily mean they will have the same performance or habit, especially if they were adopted. Be sure to read the characteristics of each cultivar before generalizing and making a decision according to some other colour of the same family name. The large red calliope is great in large containers and landscape.

Geranium Brocade Salmon Night (11) is a great plant for containers and hanging baskets. One of the few geraniums that have great looking leaves as well as nice flowers.

Related
A second look at this season’s showstoppers
Ontario research update: LED lighting systems in floriculture
Container trials set for Ontario this week
Mixed containers: A grower’s guide to getting it right