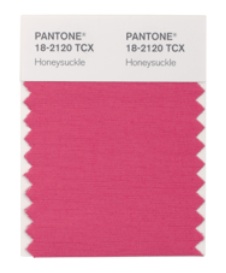 While the 2010 colour of the year, PANTONE 15-5519 Turquoise, served as
an escape for many, Honeysuckle emboldens us to face everyday troubles
with verve and vigor. A dynamic reddish pink, Honeysuckle is encouraging
and uplifting. It elevates our psyche beyond escape, instilling the
confidence, courage and spirit to meet the exhaustive challenges that
have become part of everyday life.

“In times of stress, we need something to lift our spirits. Honeysuckle
is a captivating, stimulating colour that gets the adrenaline going –
perfect to ward off the blues,” explains Leatrice Eiseman, executive
director of the Pantone Color Institute®. “Honeysuckle
derives its positive qualities from a powerful bond to its mother colour
red, the most physical, viscerally alive hue in the spectrum.”

Eiseman continues, “The intensity of this festive reddish pink allures
and engages. In fact, this colour, not the sweet fragrance of the flower
blossoms for which it was named, is what attracts hummingbirds to
nectar. Honeysuckle may also bring a wave of nostalgia for its
associated delicious scent reminiscent of the carefree days of spring
and summer.”

Honeysuckle is guaranteed to produce a healthy glow when worn by both
men and women. It’s a striking, eye-catching hue that works well for day
and night in women’s apparel, accessories and cosmetics, and in men’s
ties, shirts and sportswear. Add a lively flair to interior spaces with
Honeysuckle patterned pillows, bedspreads, small appliances and tabletop
accessories. Looking for an inexpensive way to perk up your home? Paint
a wall in Honeysuckle for a dynamic burst of energy in the family room,
kitchen or hallway.

For more than a decade, Pantone’s Colour of the Year declarations have
influenced product development and purchasing decisions in multiple
industries including fashion, home and industrial design. Past colours
include: