International award recognizes “influential contributions leading to the development and implementation of biological control methods for the greenhouse and floriculture industry.” 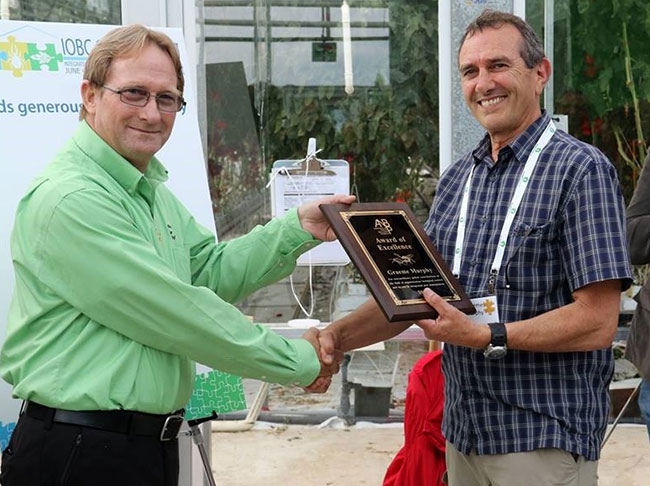 ANBP president Richard Ward (at left) presents Murphy with the award during this year’s IOBC meetings in the Niagara region.

September 2017 – Ontario has long been a world leader in the adoption of biocontrols in floriculture crops.

And a person who helped teach and encourage growers during this pest management transition from pesticides has been honoured with one of the industry’s highest awards.

Niagara-based consultant Graeme Murphy has received the 2016 Award of Excellence from the Association of Natural Biocontrol Producers (ANBP).

The award was presented during the “Integrated Control in Protected Crops, Temperate Climate” working group meeting of the International Organization of Biocontrol (IOBC). The five-day conference – which is held every three years – was held in Niagara Falls in early June.

The ANBP award was in recognition of Murphy’s “influential contributions leading to the development and implementation of biological control methods for the greenhouse and floriculture industry,” and he was described as “a veritable biocontrol icon in North America.”

Murphy served as the greenhouse floriculture IPM specialist with the Ontario Ministry of Agriculture, Food and Rural Affairs from August of 1988 through to his retirement at the end of 2014.

Up until early in the 1990s, flower growers had relied on chemical controls to keep pests in check. However, things had to change as resistance issues arose with some pesticides, and others were withdrawn from the market due to changing regulations.

IPM as a concept had not yet been adopted, Murphy recalls of the early years of his career. “We hadn’t yet formalized a monitoring program and IPM is built around effective monitoring,” he said during our recent interview.

MONITORING PROGRAMS
All control strategies, he added, spring from an understanding of what is going on in the greenhouse, and it was in the early 1990s that an ever-increasing number of growers were beginning to implement monitoring programs. This gave them a better understanding of which pests were present, where they were located, and how the pests that were present changed from crop to crop and from season to season.

That knowledge allowed them to develop effective IPM strategies, and biocontrols were key tools.

“Some growers picked up on biologicals more easily than others,” said Murphy. Some would use bios for some crops but not others, or for some pests and not others. “It was a very slow and gradual process.”

Murphy was involved with many research projects related to biocontrols at Agriculture and Agri-Food Canada and at the University of Guelph, and was a key influencer in passing along this information to growers.

He hosted regular workshops and was involved with the Flowers Canada Ontario growers’ night school course for many years. He was constantly in and out of greenhouses throughout Ontario, spoke at conferences both here and abroad, and was a frequent contributor of IPM articles to trade magazines, including Greenhouse Canada.

For many growers in the province, he was their key resource as they increasingly came to rely on biocontrols.

The result? As noted earlier, Ontario is a world leader in biocontrols with ornamental crops – so much so that some biocontrol companies in Europe were sending their technical specialists to study what was being done here.

Recent surveys have shown that 70 to 80 per cent of Ontario growers use biocontrols as a first line of defence.

ANBP president Richard Ward (at left) presents Murphy with the award during this year’s IOBC meetings in the Niagara region.

SPEAKING AT CGC
Murphy will be discussing the use of biocontrols in cut gerbera crops as a speaker at next month’s Canadian Greenhouse Conference at the Scotiabank Convention Centre in Niagara Falls. He will be speaking during the cut flower session on the Wednesday afternoon (Oct. 4); the session begins at 2 p.m.

He has been involved as a CGC speaker for many years. In addition, he also helped plan and host the annual floriculture pre-conference bus tour for many years up until his retirement.

As a consultant, he works with a number of growers on fine-tuning their pest management programs, and conducts staff training sessions and still maintains an active interest in current research at Vineland. He is also an occasional instructor at Niagara College, teaching an IPM course during the fall semester.

“His expert entomological experience and knowledge helped many growers as they managed that transition.”