The Swedish-American Chamber of Commerce in New York annually awards the prize to a company with a breakthrough green technology within the food chain. 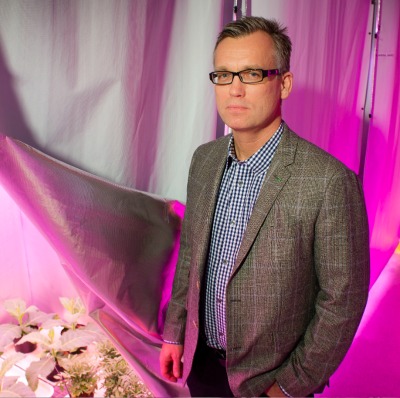 Here's what the award sponors had to say in presenting the award:

“Heliospectra is awarded the Green Award in recognition of the company’s ground breaking work in the field of enhanced agricultural results and sustainable greenhouse farming, in particular for the development of the Heliospectra intelligent LED system.

"The company’s mission is to develop and sell efficient lighting systems that provide control of plant growth and quality. Heliospectra’s patented technology can reduce energy consumption by up to 50 per cent in greenhouses while at the same time producing a crop that looks and tastes better, and also has a longer shelf life.”

Heliospectra CEO Staffan Hillberg (pictured) said the company “has an unbreakable focus to create products that can give us a more environmentally friendly future, and it’s great that their hard work is being recognized. There are a lot of good companies working within green technology, so being chosen as the winner of this award is a great honour.”

This award adds to an already exciting year at Heliospectra.

Its new system, the L4A Series 10, was launched last spring, along with advanced software for controlling the light environment. Both quickly gained attention from top plant scientists and research institutes across the world, one of which – the German Aerospace Centre (DLR) – uses the technology with the objective to eventually grow vegetables in space.

Founded in 2006, Heliospectra specializes in smart LED lighting systems for plant science and horticulture applications. The products are based on a deep knowledge of plant physiology and photosynthesis as well as unique ways of utilizing modern LED technology.

After six years of development in Sweden, the company is now moving briskly into international markets. The company has raised over $4.48 million (U.S.) in venture funding and received over $2.6 million through academic grants.

The company has also received several awards for its forward-thinking technology. Click here for more information.