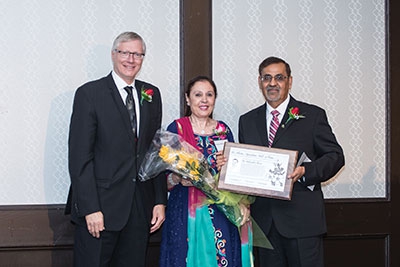 Nov. 28, 2014, Edmonton — Dr. Mohyuddin Mirza, a longtime greenhouse researcher and resource for Alberta greenhouse growers, has been inducted into the Alberta Agriculture Hall of Fame.

This is the latest in a long line of awards for the affable researcher and extension specialist.

Mirza is an accomplished and visionary scientist whose practical research for over 35 years has invaluably impacted the greenhouse industry in Alberta.

He has also forged lifelong friendships with many growers in the province. Several growers from across the province attended the awards ceremony.

Mirza retired from Alberta Agriculture and Rural Development (AARD) in 2008, but has maintained close ties with growers now working with the Alberta Greenhouse Growers Association.

He received the AGGA’s Lifetime Achievement Award in 2008, and is a two-time recipient of its Outstanding Service Award. He was also honoured with the establishment of a scholarship in his name.

PIVOTAL ROLE IN HELPING BUILD THE ALBERTA INDUSTRY
For more than three decades, he has played a pivotal role in building the greenhouse industry in Alberta from a $25 million a year industry in 1980 to over $160 million today.

Throughout his career he has been dedicated, accessible and easily approachable.

“A great disseminator of information, he was often the first to update growers on emerging threats to their crops, offering diagnostic help suggestions on how to best handle the situation,” noted cere-mony emcees Jack Howell and Dianne Finstad, well-known radio hosts associated with the “Call of the Land” program of AARD.

“He willingly shared his home phone number and was always accessible to growers when needed.”

MORE THAN 1,000 RESEARCH PAPERS PUBLISHED
Mirza has published more than 1,000 research papers. A sampling of his research over the years includes:

With the award, Mirza was recognized as “a pioneer in introducing hydroponics production to greenhouse crops, for almost 30 years this educator, mentor, researcher, writer and problem-solver played a pivotal role in building the greenhouse industry to what it is today.”

A FOUNDING FATHER OF THE AGGA
In 1980, Mirza identified the need for a provincial association that would bring together greenhouse growers and promote their sector. He drew up a business plan and bylaws and became a founding member of the Alberta Greenhouse Growers Association.

He also currently serves or has served on numerous local, provincial and national industry boards throughout his career lending his expertise while promoting the Alberta greenhouse industry and its many opportunities and accomplishments.

Mirza was also instrumental in developing a new economic opportunity within the forestry sector by leading research in growing tree seedlings in different types of stocks, designing fertilizer programs, conducting greenhouse schools and teaching growers the skills to plant trees suitable for reforestation.

These efforts, developed between 1992 and 2000, resulted in over 80 million pine and spruce seedlings being grown annually in Alberta, increasing the value of the sector by $20 million.

In the 1980s he helped introduce soilless crop production, an innovation that helped further built the industry.

“Many say Mirza is best known as a friend to growers,” said the award presenters. “Always reachable, he constantly provided time to teach and share with growers. According to one former student who was inspired by Mirza to start his own greenhouse business, ‘helping others succeed is his passion.’”

“His community work did not go unnoticed. Be it raising food for the Edmonton Food Bank or helping with apple grafting or talking about world peace in interfaith forums, he is there.”

Mirza said he accepted “this most honourable award with gratitude and humility.”

He thanked “the entire Alberta greenhouse industry and especially the Alberta Greenhouse Growers Association for the tremendous support I’ve received at every step.”

He said the industry has a unique culture, something that is reflected in the continuing strength of the AGGA even after 35 years.

“This unique culture is the culture of mentoring,” said Mirza. “At the association level, the senior members are coaching and mentoring the younger growers who are coming on board. There is a culture of respect, integrity and fellowship.”

News of the Hall of Fame induction was immediately greeted online with congratulations from many growers. Here’s a brief sampling.