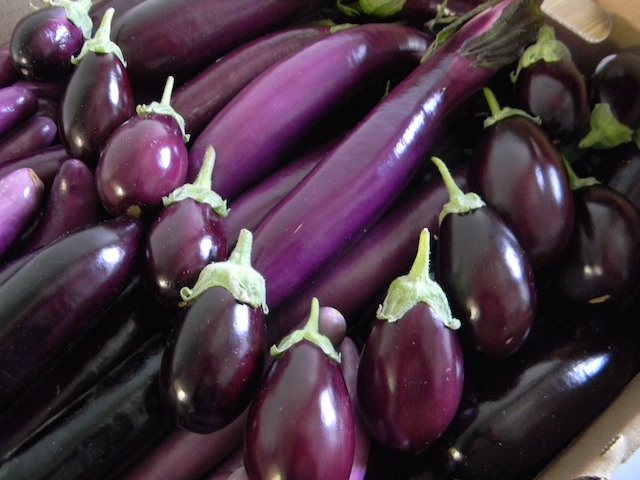 Jan. 26, 2016, Vineland Station, Ont. — With the highest per capita immigration rate in the world, Canada’s produce consumption is continually evolving. Based on Statistics Canada reported patterns of growth over the last five years, eggplant consumption – particularly exotic varieties not previously grown in Canada – is forecasted to increase 130 per cent by 2030 to 55 million kilograms.

This is a market currently supplied by imports.

A team at Vineland Research and Innovation Centre (Vineland) is investigating varieties with commercial potential for production in Canada to meet this growing consumer demand and replace imported produce with local.

Dr. Viliam Zvalo, Vineland’s Research Scientist in Vegetable Production Systems and his team initiated simultaneous research trials on both Chinese long and Indian round eggplant during the 2015 growing season.

• Nine varieties of eggplant were also investigated for greenhouse production; Long Purple and Purple Comet hybrids showed the most promise.
Grafting onto tolerant tomato rootstock is an effective technique to overcome soilborne disease for field eggplant and to improve vigour and yield for greenhouse eggplant.

Using a Maxifort rootstock, the Vineland team achieved an 84 per cent increase in yield for the Long Purple hybrid in a greenhouse setting. On the other hand, when grafted onto Maxifort rootstock for field production, flowering and fruit set were delayed, which is undesirable.

Farm trials on different rootstocks will be undertaken this year.

“We have also used row covers in field production to obtain an earlier harvest,” said Zvalo. “Modifications of the growing environment through the use of row covers and black plastic mulch are necessary to grow eggplant in Canada.”

This research project is funded by Agriculture and Agri-Food Canada’s Agricultural Innovation Program, Growing Forward 2 (GF2), a federal-provincial-territorial initiative and with support from the Ontario Fruit and Vegetable Growers’ Association and participating growers across Canada.