A recent media event, at a west end Toronto garden centre, promoting
the use of summer-flowering bulbs for container growing, was a definite
win-win occasion for everyone involved. 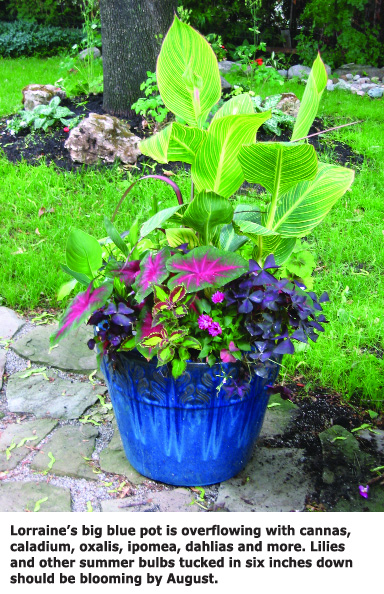 A Hit with Garden Writers

A recent media event, at a west end Toronto garden centre, promoting the use of summer-flowering bulbs for container growing, was a definite win-win occasion for everyone involved.

Carol Cowan of Zebra Promotions Inc., who does the Canadian public relations for the Netherlands Bulb Association, was delighted with the media turnout and subsequent press coverage. Paul Zammit, chief horticulturist for Plant World, who provided the space and ran the program, was thrilled with the outcome of the venture. And, garden writers like yours truly as well as people like Kathy Renwald of The Toronto Star and The Hamilton Spectator, Marjorie Harris of the Globe and Mail and others were happy with the opportunity to learn from the experts, play in the dirt and take home a fabulous container overflowing with bright, beautiful, tropical and exotic-looking plants.

The event of the season for Canadian garden writers was the brainchild of Cowan, who lives in an apartment, has a west-facing balcony and has been growing summer bulbs out there for years. Looking at articles on container gardening, she realized that very little mention was made of using summer blooming bulbs such as cannas, oxalis, eucomis (the little pineapple lily), caladium and more, not to mention those old favourites lilies, gladiolas, dahlias and begonias.

“I knew how fantastic they are for containers, easy to plant and work with, and that many of them flower in August or later, just as everything else is starting to look dull,” she says.
One of the stumbling blocks for promoting summer bulbs in Canada was the fact that to be over wintered they must be dug us and kept inside over the winter. “But when I looked at the money currently being spent on annuals, I realized that the secret to promoting their use was to treat them as annuals, just as designers are doing right now by planting perennials in pots.”
Having seen Paul Zammit do containers at a Toronto Botanical Garden event, she knew that his boundless energy made him “the best person for the job” so she contacted Plant World with the promise to “bring you the country’s top garden media.”

Cowan approached Plant World because of Paul Zammit and also because she wanted a location large enough that noon would not have to be dragging equipment and plant material all over the place and where an attractive luncheon area could be set up.

“I wanted an intimate, fun, interactive event where we could all learn something and I wanted to do it in the height of the gardening season, as close to May 24 as possible.” Despite trepidation on the part of Plant World because it was at the top of their busiest season, the event was held May 25, because Cowan knew the participants would want to get their containers outside as soon as they got home.

Eighteen of the 21 writers invited showed up, no doubt at least in part because Cowan has made a point of cultivating good relationships with the gardening media who know that she will provide them with information of value. And the promise of being able to take home a pot full of plants didn’t hurt either.

Articles soon appeared in The Toronto Star, The Hamilton Spectator, The Globe and Mail and The Toronto Sun and she anticipates that most of the magazines will use the material next summer. “One of the rewards of a public relations project well done, is that it will continue to reap benefits three or four years out,” says Cowan. “The effects are long term. Consumers read articles by a journalist they like and will remember bits and pieces of it for years.”

“Knowing the power of the press, we quickly realized what a great opportunity this would be for Plant World,” says Zammit. “Talking to the people who tell everyone else what to do was a chance for us to inform the public about how we plant pots.”

The hands-on seminar also gave Zammit a chance to do some cross merchandising such as: use a container with good drainage, use a potting mix rather than triple mix or soil from your garden, add moisture boosters such as SoilSponge and add a slow-release fertilizer like Smartcote every two weeks until the end of July.

He also advised buying summer bulbs early to get the best quality and keeping them in the fridge until its time to tuck them into your pots along with annuals, even red or green lettuce, ivy, geraniums, ornamental grasses, coleus or just about anything else that adds height, form, colour and texture.

“The event was a terrific learning experience for us,” says Zammit. “We watched what you guys (the media) were doing and wondered ‘are we being too basic?’ and ‘why are they taking notes?’ On their part, the journalists seemed surprised at how quickly we throw things together and how easily we will take them apart if they’re not working.”

An added bonus, he said, was that Plant World’s customers were intrigued. “They recognized some of the writers and asked ‘when can we sign up?’”


Related
FROM THE EDITOR: September 2006
From the Editor: Do we really know all we are selling?
Video helps consumers ‘Pick Ontario’
Success in a tough market