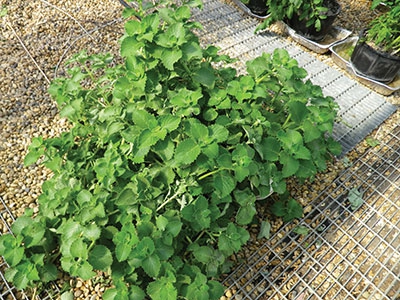 Integrated Pest Management (IPM) is always a “hot” topic.  Growers of vegetables, flowers and ornamentals are always interested in the new biocontrol agents being introduced.

I was at the Cultivate’14 conference in Columbus, Ohio, and learned that some companies don’t recommend the use of banker plants in aphid control strategies. However, every company representative in the trade show I talked to agreed that the monitoring and trapping of insects is an important part of IPM practices.

I think there is more interest in trapping insects in large numbers and thus getting rid of them from the lifecycle chain.  The Alberta Crop Industry Development Fund (ACIDF) is funding a project on developing best IPM practices for bedding plants, flowers and vegetables in Alberta.

Two team members at the Crop Diversification Centre North in Edmonton made an interesting observation on the behaviour of western flower thrips (WFT) in the presence of Cuban oregano (Plectranthus amboinicus).  Olivia Hares, a young and energetic student, and research scientist Dr. Kwesi Ampong-Nyarko have been working in greenhouse IPM and ethnic vegetables for some time.

Hares is a graduate of University of Alberta, where she earned a bachelor of science degree with a specialization in animal biology.

SO WHAT DID THEY DISCOVER?
During an interview this is how it was described: “Dr. Kwesi Ampong-Nyarko and I [Olivia] have been working in greenhouse IPM with ethnic vegetables such as okra and Cuban oregano.

“In our routine weekly monitoring with yellow sticky traps, we noticed that trap catches from Cuban oregano were high in thrips with no visible damage.

“To test this observation further, we devised an experiment using Cuban oregano and tomatoes to see which plant was preferred by the thrips. We predicted that the thrips would be more attracted to the Cuban oregano because of the strong olfactory cues it excretes.”

If their hypothesis is proven, they believe Cuban oregano could be used as an attractant for thrips within greenhouses to increase trap efficiency and lower damage done to greenhouse crops.

“It is very easily propagated and is very hardy. Branches cut or pulled off and placed in soil in the greenhouse will sprout roots and become independent plants within a week. It will also survive even if it is not watered every two or three days.”

In the first two weeks of the trial, the researchers found a significant trend for thrips accumulating on traps at Cuban oregano plants (Fig. 1).

“We gathered these results by placing four replicates of each plant in a circular design with yellow sticky traps placed just above the plant canopy.

“This design would remove any doubt that positioning of plants has an effect on thrips mobility.

“We looked at leaves from the Cuban Oregano plants, but to our surprise no insects were found. We believe that the bugs are attracted to the smell but do not necessarily land on the leaves.”

The research is continuing. More data is being collected to replicate the results. They hope to also test whether Cuban oregano is an efficient attractant by testing it against other attractants such as vanilla extract and thrips pheromones.

In another experiment, they compared the effectiveness of yellow sticky traps with Cuban oregano plants, with the following results:

The next steps include testing the efficacy of this plant in commercial greenhouses. Other project objectives are to determine threshold values for thrips in cucumbers. Growers are reporting far less damage to mini-cucumbers compared to regular long English cucumbers.