With multiple series available for popular perennial crops, the season can be extended for both the grower and the retailer. 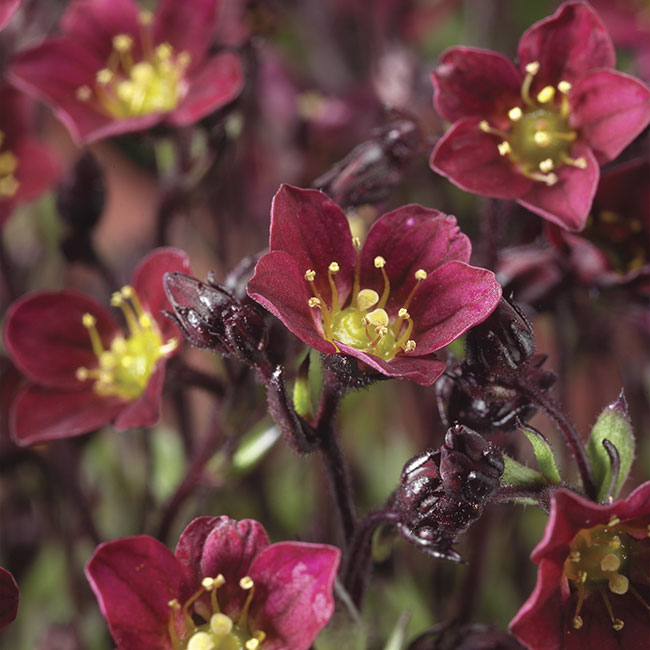 Saxifraga Touran Scarlet is from a later blooming series.

I remember a simpler time in my life. The only decisions I had to make were what I was going to wear that day and if I wanted a hot or cold lunch at school. The task of scheduling perennial production was equal in its simplicity not all that long ago. Only a handful of traditional varieties were available to choose from and all required vernalization. The only real decision was how many Salvia ‘May Night’ a grower wanted to produce that year.

As all things in life like to change, so did consumer interests. As more families were owning homes and succumbing to demanding schedules, there was a growing appeal to being able to add colour into their landscapes with just a single planting. With increased perennial demand came new breeding, new young plant forms and a need to have perennials on the shelf year-round. Flash forward to today, breeding has come a long way to accommodate this flourishing market, offering new and interesting products that can be grown throughout the season. That is why we are seeing more breeding companies collaborate in their perennial portfolios. ThinkPlants is one example of a larger collaborative effort involving multiple breeders, pooling early-season perennials with first-year flowering selections to keep products on shelves throughout the season.

Perennials will always be limited by seasonality with regards to when they can go to market, however, new breeding has helped to blur those lines. First-year flowering perennials have removed the need for costly vernalization and over-wintering on crops like Leucanthemum, Lavender, and Coreopsis. Western Star Leucanthemum and Lucille Leucanthemum series are great examples of how new breeding has made it easy to have high-selling perennials blooming outside of their normal season. There are other selections that have traditionally required vernalization, but with new genetics, are now first-year flowering, including certain varieties of Gaillardia, Salvia, Agastache, Campanula and Achillea. These offer growers the ability to have plants in front of the consumer before they would typically start blooming in the landscape.

Varieties that require vernalization to bloom can still have a special place in a grower’s early-season assortment. These species are planted in the fall of the previous year. They can then be bulked, vernalized, and forced into flower in early spring. Vernalized plants tend to be hardier and more cold- tolerant. Certain series of Iberis, Saxifraga and Aubrieta for instance, will not flower without a cold treatment, so be sure to check with your breeder.

In both the first-year flowering and traditional varieties, different series can have multiple bloom times ranging from early spring to late spring. Having multiple selections can assist in spreading out and lengthening overall bloom time throughout the season. There are also differences in vigour and input forms (seed vs. vegetative) to better fit varying production models and streamline the planning process. Here we’ve used Saxifraga, Iberis and lavender as examples.

Saxifraga has several selections to help conform the crop to multiple production schedules. Figure 1 shows how these series differ in vigour and bloom time. By using both the Alpino and Touran series in a production program, the grower has the ability to spread out their season. Lofty, Syngenta’s seed form of Saxifraga, is perfect for small container production. Lofty can also be grown in 2.5-gallon containers, but the series lacks the depth in colour that can be found in vegetative breeding. Figure 1 depicts how these options can be used to best fit each grower’s program.

Iberis also has multiple selections to address different climatic regions and cultures. Similar to Saxifraga, they allow growers to have a single plant date with varying bloom times. This delay in blooms allows for an extended shipping season. The most recent introduction, Snow Cone Forte possesses higher vigour, allowing for a shorter time period to bulk a 2.5-gallon container before starting vernalization. This can be beneficial if there is a lack of space in the greenhouse or high temperatures which may make traditional planting dates difficult. If a grower struggles with propagation or is in need of a more economical option, Tahoe, a variety propagated from seed could be a solution. Refer to Figure 2 for examples of variety selections and how they might fit a customer’s needs.

Because of its popularity, lavender has multiple varietal solutions to fit any program. Whether it is Spanish or traditional English, seed or vegetative, new breeding has expanded this market far beyond the original Hidcote or Munsted. With Vintro, there are now improved genetics that produce a more attractive plant. Though Vintro still requires vernalization, this option allows you to have lavender in stores earlier than the first-year flowering series. To lengthen the season, the grower could then follow with a spring planting of either Aromatico or Sentivia, which are both first-year flowering varieties (Figure 3).

While seed is typically segregated to small pot production, new breeding has introduced a stoechas lavender that rivals vegetative lines. Violeta, introduced for 2019, has the bloom size and repeat flowering to compete with both Javelin Forte and Laveanna (ThinkPlants vegetative varieties). This solution can be helpful to those growers that may find vegetative propagation of lavender difficult. Figure 4 shows how selecting from the available varieties can fit a season-long program.

While it would be nice to treat perennial production planning like Steve Jobs’ wardrobe, the market demands more than just a black turtleneck sweater every day of the week. This article highlights just some of the ways that new breeding has taken perennials from backyard finds to finely tuned varieties similar to their annual cousins. Despite sounding more complicated, this has streamlined production planning and allowed growers to produce the diversity demanded by this industry’s customers.

Mike Fischer is the perennial technical services representative at Syngenta Flowers, a participant of ThinkPlants (ThinkPlants.com), a marketing initiative among different breeders and other horticultural experts. He can be reached at Mike.Fischer@syngenta.com.