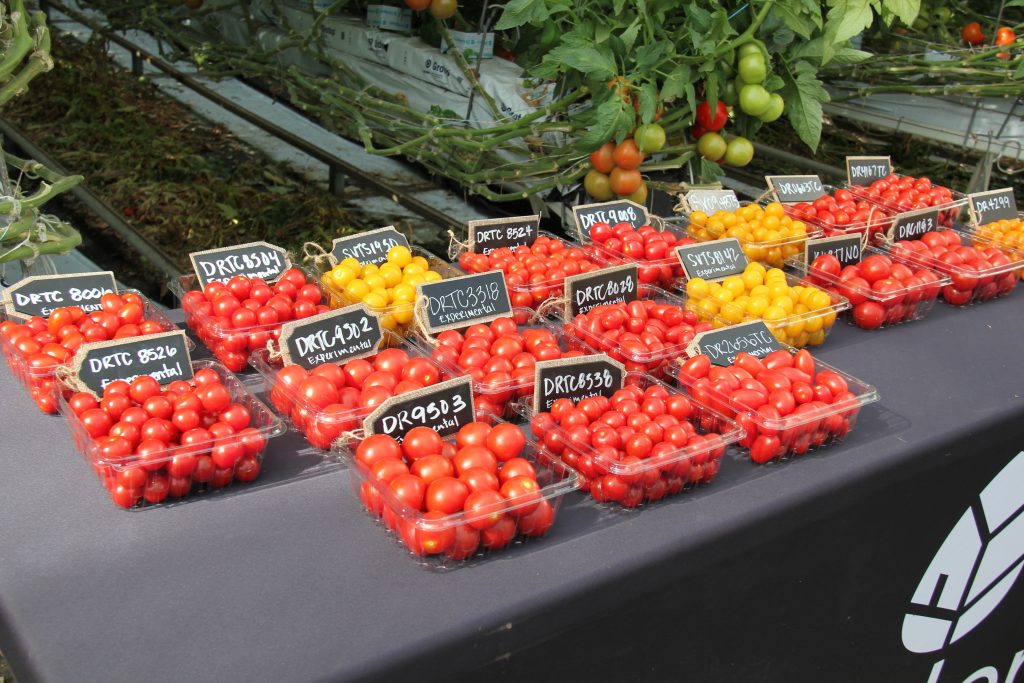 With greenhouse vegetables, there are many different varieties available. Each one is selected for higher yields, larger fruit, disease resistance, flavour and more, but how well do those attributes hold up in the greenhouse?

“Every grower is a bit different” says Christof Stoll, the Holland-based pepper breeder at De Ruiter. Different practices, such as different growth media and temperature regimes, all have an effect on the hybrid, he says.

Breeding for different markets across the globe, Stoll finds out what growers want, chooses the parental material and selects the first set of hybrids. For bell peppers, he’s looking for bigger fruit, higher yields and better resistance to diseases such as tobacco mosaic virus, tomato spotted wilt virus and powdery mildew.

Stoll’s candidates are sent off to De Ruiter’s technology development representatives, such as Marjan Willett for their Canadian region. She then trials them with local greenhouse growers, selecting the best hybrids for that region through second and third rounds of elimination. Repeat trials are carried out in the same locations, comparing results year after year.

“Growing is about art, science and location,” says Willett. The growing environment affects the outcome, including yield, fruit weight and crop behaviour.

The process is like a funnel, explains Carlos Buzio, regional product manager at De Ruiter. You start with a larger number of varieties and whittle them down. With trial locations, it’s an inverted funnel – first starting with a few places, then increasing that number. The more locations there are, the more data we have, he says.

Plus they have to anticipate the demands of the market, which also differ by geography.

“We are always trying to look further ahead”, says Willett. This includes predicting trends in size, shifts in colour preferences for instance, to supply the different markets in three to five years.

If high yields are every grower’s dream, why not simply offer one variety with the highest recorded yields and a decent disease package?

We need to look at the percent difference between marketable and non-marketable yields, explains Willett. Sometimes, even if there is less yield overall, the economical yield can be higher.

There are other factors as well. One of De Ruiter’s latest launches is a red pepper known as ‘Dexter’. It’s a good early-yielding variety, which could translate into higher returns. Overall yield is competitive, explains Buzio, but because it coincides with higher market pricing in April and May, it provides an opportunity for the grower to maximize returns when prices are typically higher. Earlier fruiting can have its advantages.

Other times, it’s about ease of harvest. Take the grape tomato known as ‘DR0603TC’ for example. It has a smaller stature and is becoming known as a labour-friendly line. “They’re easy to pick” says Marcin Widecki, technical sales representative at De Ruiter. It’s something you need when everyone is having trouble with labour issues – how can tomato breeding solve that?

For smaller snacking tomatoes, taste is key, says Widecki. Yield tends to be more important for larger tomatoes because they’re eaten in sandwiches or with other foods. But with chefs and foodies becoming more prominent in mainstream media, people are interested in putting taste back into larger tomatoes.

And that’s something they’re targeting.

“You and me, we have different preferences” says Dr. Chow-Ming Lee, Global Consumer Sensory Lead for De Ruiter Seeds. Known to his colleagues as ‘Dr. Yummy’, Lee has been looking at what consumers enjoy about tomatoes.

Administering blind tests through a third party, Lee has surveyed consumers of different race, age and gender in different countries. Consumers may be screened for consumption patterns, demographics, grocery shopping frequency and most importantly, as consumers of the produce being tested. Other screening criteria may include colour blindness, since colour is always a feature of the sample. Consumer preference is a blend of many attributes such as sweetness, umami-ness, bite, sensation on the tongue, aroma, texture and colour, to name a few.

“Humans are multivariate,” says Lee. They take many different factors into account and distill them. Instrumental measurements, by comparison, are univariate. “In additional to consumer data, we leverage instrumental data for speed and quantity. The collected analytical data is plugged into algorithms to generate estimated consumer preference. A combination of both consumer preference and analytical measurements helps us to know how our new tomato varieties test against the market standard. Great tasting De Ruiter tomato varieties such as DR0603TC, DR4299TC, Delisher, Juanita and Tomimaru Muchoo were tested with consumers in selected countries.”

All this information is brought back to the breeder and incorporated into their next breeding efforts.

“A lot of the times, the seed is the largest purchase customers make,” Willett says. But without the right agronomic practices, it’s like purchasing a car without an instruction manual, she explains.

That’s why a large part of their greenhouse trialing work is in the agronomics, figuring out how to bring out the best in these varieties.

There’s a lot of support that comes with each variety, says Emily Standley, brand communications manager at De Ruiter. Whether it’s rootstock recommendations or how varieties perform under various temperature, water and lighting conditions, growers aren’t simply left with the seed.

To date, they’ve trialed cucumbers and tomatoes under LED and HPS lighting. It hasn’t yet happened for peppers, but they will if there’s demand for it.

Part of their support is also matching up growers with the right varieties for their operation.

Going through their cucumber trial open house, De Ruiter technical sales representative Yolanda Przytocki points out the different varieties suitable for different parts of the growing season: ‘Davida’ and ‘Avaya’ for higher light conditions in the spring and summer, the aptly named ‘Autunno’ for early fall and early spring, and ‘Camaro’ mostly for winter.

They’ve also been experimenting with a new modified umbrella system for cucumber production in Niagara and Leamington. Instead of pinching the main stem at the horizontal wire, it’s allowed to grow and continue developing fruit. Primary laterals running from the top are allowed three fruit each.

“The level of fruit production is more even, which puts less stress on the root system,” says Przytocki. That means a healthier root system for better growth and higher quality fruit later in the season.

There’s also an advantage to applying this system in certain varieties.

In the end, seed breeding isn’t just about pushing out new varieties. It’s understanding what traits to breed for and what problems growers need to solve.

“Customers are where we start and where we end,” says Standley.