Griffin’s Greenhouses, a small family-run garden centre/grower
operation just outside of Peterborough, Ont., celebrated its 30th
anniversary last year. By all standards, three decades in business is a
significant achievement. But, in a retail world now dominated by box
stores and the “convenience factor,” this accomplishment is even more
impressive. 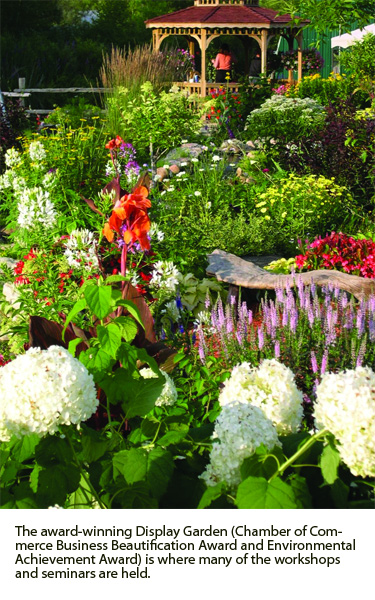 Griffin’s Greenhouses, a small family-run garden centre/grower operation just outside of Peterborough, Ont., celebrated its 30th anniversary last year. By all standards, three decades in business is a significant achievement. But, in a retail world now dominated by box stores and the “convenience factor,” this accomplishment is even more impressive.

Griffin’s is located on a long and narrow five-acre plot, 10 km outside the city and three kms. from the community of Lakefield. Customers include both local residents and cottagers on their way to the Kawartha Lakes. In either case, many of Griffin’s customers are making a special trip when they visit the garden centre. “That type of loyalty is hard to come by these days,” says manager Victoria Whitney.

Whitney, the daughter of founders and owners Jack and Ann Griffin, has a strong sense of how to develop loyalty. The guiding principle at Griffin’s is the 80/20 rule. “We sell and market our merchandise based on the principle that 20 per cent of our customers make up 80 per cent of our business,” she says.

With that principle in mind, Whitney focuses much of her attention on her most important customers. Four years ago, she set up a loyalty program called the “Griffin’s Customer Appreciation Card.” Customers were invited to join the program for an annual fee of ten dollars, with a portion of that going directly to a charitable cause. (This past year, for example, the money was donated to the Peterborough chapter of the Osteoporosis Society of Canada.)

Customer benefits included a ten per cent discount on all merchandise, a monthly newsletter sent either by e-mail or Canada Post, invitations to the summer garden party and a Christmas “sneak peek” wine and cheese event.

In the first year, Whitney and her staff signed up 200 customers. Today, there are more than 600 customers taking part in the program. And Whitney has her sights set on 1,000 members within the next two years.

In 2007, Whitney plans to reduce the discount to a more workable figure of five per cent, while offering members a five-dollar discount on workshops and inviting them to attend the seminars free of charge.

The loyalty program is just one aspect of building great customer relationships. Whitney believes that one of the most important things that a garden centre can do to maintain its customer base is to provide information to its customers. “Customers are more sophisticated now than ever before,” she says. “They come to us with questions about all sorts of things; asking about new colours, varieties and design ideas.”

“When the magazines start coming out and customers come to you with their list of what’s hot, if you don’t have those items, you’ll miss out on an opportunity,” she adds. “You have to know what they’re talking about.”

This means that Whitney and her staff are always on the lookout for trends and ideas, travelling to trade shows, attending seminars and reading trade publications. All of that information is in turn relayed to customers.

“We are a strong advocate of four-season container gardening,” she says. “In the early spring when they come in, we encourage them to do the pansies, and primula and curly willow.”

“In the fall, we’ll do container gardening with all the wonderful fall material that’s out there,” she says.  “We’ll do the mums and the kale and the such.”

Whitney runs a seminar series with guest speakers who do demonstrations for audiences of up to 40 people. She also presents some of the seminars herself and does an annual new trends presentation every spring.

The workshops are all hands on. Whitney leads the workshops that include sessions on what’s new in perennials, building patio pots, window boxes or hanging baskets, growing herbs and using them in recipes, and creating seasonal wreaths. The wreath workshops are booked solid and people are always phoning and asking if we can put on extra days, says Whitney.

One of the more interesting and innovative workshops is held in the fall when it is time to close down your garden for the season. Whitney invites customers to learn this first-hand by helping close down their large display garden.

“They stop in and spend half-an-hour or fifteen minutes or however long they want, working with our staff in closing the garden,” Whitney explains. “It gives those who like to learn by doing, an opportunity to work hands on with our staff on a real garden. Those who really like to touch and feel and clip always come to that workshop.”

All of this builds a sense of community that is integral to customer satisfaction and retention.
The workshops and seminars are an important source of revenue at Griffin’s both directly and indirectly. Whitney charges for all of her sessions, but adds that attendees generally make additional purchases when they are on site. If, for example, someone does a container workshop, she says, they are usually so happy with what they’ve done that they buy more materials so they can go home and make more.

“We try to make it an enjoyable experience,” says Whitney. “The longer they stay the more they will purchase.”

Workshop attendees often come as groups of people who are either friends or co-workers. “About three years ago,

a local dentist brought her office staff of about 20 employees by bus to a workshop. She didn’t tell them where they were going. She handed each one of them a bag with clippers and gloves, stopped for coffee at Tim Horton’s and then surprised them with a winter patio pot workshop,” said
Whitney

By word of mouth, this part of the business continues to grow, with more and more companies starting out their holiday office parties at Griffin’s, followed up by dinner at a restaurant or some other event.

Like all businesses, Griffin’s has needed to make changes over the years to remain competitive. In the beginning, the business operated as a simple seasonal roadside stand. Today, it has become a busy 10-months/year operation.

Physical changes especially over the last ten years have been important for Griffin’s growth.  They’ve recently opened up sales areas where customers have more room to walk around and have added a display greenhouse. All this to show off more of their merchandise. Just recently, they expanded their parking lot.

Griffin’s grows about 90 per cent of what it sells. In recent years there has been a significant change across the industry with garden centres moving away from the four-cell pack to the specialty annuals in the four and six-inch pots. That means that Griffin’s is growing more perennials and specialty annuals than ever before.

Griffin’s derives about 80 per cent of its revenue from the sale of plant material. The seminars and workshops bring in significant dollars and the rest is largely made up from their selection of garden accent and décor offerings. They offer almost no tools or furniture, although Whitney believes that there may be growth potential on the garden furniture side. Customers are always looking for “more beautiful things for outside,” she says.

When it comes to the big box stores, Whitney doesn’t feel threatened. “We don’t feel the crunch from them,” she says, “in some cases they are almost a help. I find that they don’t care for their merchandise and people see the difference. We don’t have to explain. It’s quite obvious why our merchandise costs more.”

That’s not to say that Whitney isn’t aware of what they are doing. She reads their flyers and pays attention to what they are selling and what prices they are charging. “Still,” she explains, “it doesn’t dictate what we grow, that’s always stayed the same, and it doesn’t dictate our pricing.”
Staffing at Griffin’s is of the utmost importance. Whitney says that having enough staff on at key times on the weekend and in the busy season can make all the difference. Griffin’s staff is always ready to discuss a plant, help people with a plant, and offer as much information as they can. “That is so different,” says Whitney, “from what customers experience in the box stores.”

In addition to owners Ann and Jack, in the spring there are about 12 employees on staff, a combination of full and part-time people, many of whom return year after year. Outside of the high season, Griffin’s has two full-time and three part-time.

New employees are hired based on having some horticultural background. In the beginning they shadow an experienced employee until they become familiar with the operation. They are often brought in a few weeks prior to the busy season to work in the greenhouse to learn more about things such as soil and watering. This also allows them to get to know the colours for the season and which plants are being offered.

Gardening as a hobby continues to grow. As Whitney points out, “It’s still exploding, baby boomers, who represent the majority of our customers, are trying more things and are enjoying more outdoor living, while the 30-somethings are information junkies and want to know more about gardening. That bodes well for the future of the operation.”

Reflecting on Griffin’s thirty years in business, Whitney believes that their success is founded on offering quality merchandise and a friendly family atmosphere. People know her parents and have seen both her and her brother growing up in the business. They see most of the same staff around year after year. It’s very reassuring to them.

As Whitney explains, “They know when they come in to shop that they will be greeted by name and that they will have a very positive sales experience.”


Related
THE EFFECTIVENESS OF RETAIL SHOW GARDENS
From the Editor: How good is your customer service?
ABCs of QR codes
Growing Your Vertical Garden Department