This ornamental grower dives into leafy green production with her new hydroponic system. 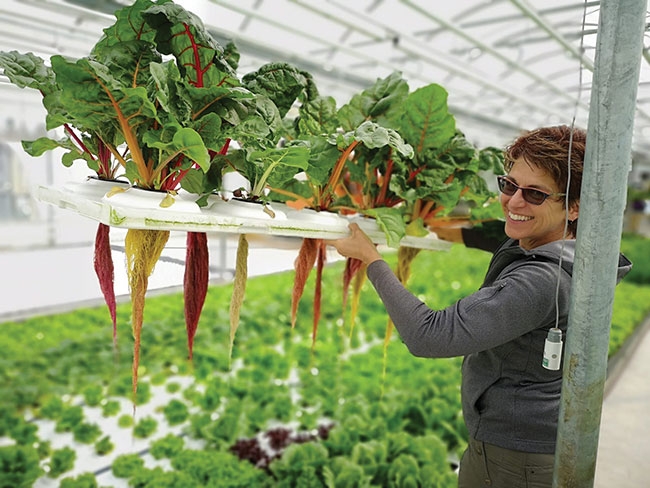 Already established in her retail and wholesale ornamental business, Nadine Stielow, owner of Thiel’s Greenhouses in Bruderheim, Alta., considered a number of crops, examined consumer demand and local supply, then reached out to industry consultants before settling on hydroponic lettuce.

Existing greenhouse structure was a key consideration, as the new additions were acquired from another grower. It wasn’t tall enough for tomatoes and cucumbers, Stielow explains.

Lettuce is a good choice for ornamental growers with a limited season, says Shawn Mallen, sales and hydroponics manager at A.M.A. Horticulture. Since Stielow’s ornamental production closes down from July to February, hydroponic lettuce offered a more stable, year-round opportunity for her employees.

Building inside a pre-existing greenhouse structure influenced her choice of hydroponic technique, of which there are two main choices: nutrient-film technique (NFT) and deep water culture (DWC or “the pond”).

Retrofits can be harder for NFT where the troughs are set at certain lengths, says Mallen. While NFT is a good choice for smaller operations, the pond has greater potential for scaling up.

Theoretically, Stielow’s team could have pieced together a system themselves, but local producer Doef’s Greenhouses showed them the ease of their own DWC system. Delivered as a ready-to-build kit from Dry Hydroponics, a key advantage was having uninterrupted access to the Dutch manufacturer’s support and guidance, not only during the building phase, but continuously throughout production.

“I knew nothing about growing hydroponically. I’m venturing into a whole new world of growing – two businesses under one umbrella. Why wouldn’t I go for as much tech support as I could possibly have?” says Stielow.

Once the initial groundwork for the pond structure was laid, the “hydroponics-in-a-box,” as Stielow describes it, arrived. From there, they simply put the pipes underground, installed the circulation and pump systems, then lined the pond before hooking up the parts and adding water.

The patented rafts lift the crown of the plant up over the water, leaving only the roots in the solution. This reduces the chance of rot and makes for a healthier plant.

Substrate selection
While the kit comes complete with materials for the rafts and pools, Stielow tried different substrates before settling on a sticky peat by BVB Substrates. Its long-fibre quality allows her to form her own peat blocks, and among the substrates she tested, has resulted in more even germination and faster growth. A machine is used to help her form the blocks within the seedling raft.

European black peat has qualities that differ from Canadian peat. “For some specialty crops, we find that their peat lends itself better,” says Mallen, but for other potted ornamentals, Canadian peat works just as well, and without the added expense of bringing it overseas.

Sticky peat has also been well-received by her markets, even though some soil falls off the product. “My one buyer in Edmonton, they actually like the soil because it gives their product a farmer’s market feel in their retail store – and that’s what they’re after,” she explains. “As part of my business model, even the substrate is important to me.”

Another alternative is a polyurethane-based foam, which may be less socially acceptable for specific markets where the live plant is sold, says Mallen. But for growers who have existing vegetable production in stonewool, they may not want a peat-based product in their facilities.

Nutrient feed
Stielow’s setup involves three ponds. “One is a seedling pond where you insert the smaller seedling rafts once the seeds germinate,” she says. As the crops continue to grow, the rafts are pushed down to the end of the pond, transferred into finishing rafts and into one of two finishing ponds.

All three are linked by a circulating system. To maintain the right nutrient levels, her hydroponic system has a program that tells her how much of each nutrient should be added to the tanks. Once the readings are taken on a daily or weekly basis, the user simply has to adjust for the nutrients taken up by the plants.

“It’s a really stable system,” says Mallen. Similar to a lake, the pond only varies by a little if the temperature drops or gets hot outside. “Once you set your water temperature, your EC, your pH and your nutrients, all that remains constant.”

Continuously reading and adjusting, the tank system will pulse-inject what’s needed based on preset values, avoiding sudden drops or rises in measured parameters. “If it reads an EC of 2.0, but you want 1.8, then it knows to lower it.” If the pumps stop unexpectedly, the nutrients and water are still in the pool for the plant, leaving enough time to repair the problem.

Fresh crop, fresh faces
For Stielow, their new hydroponic system has brought newfound awareness of their business among a new demographic of consumers.

“That’s the bonus,” Stielow says, “to have a whole new set of different customers coming through that door.”