Understanding environmental factors that cause plant diseases is so important. “They are caused by a lack or an excess of something that supports life. If these cases are severe, then the plant will die. But if they are only off to a certain degree, then the plant will be weak and diseases will have a better chance to take hold.” 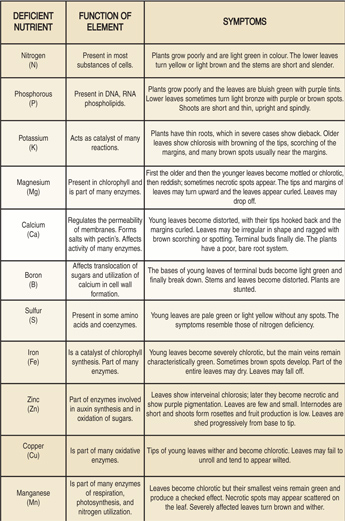 If the introductory paragraphs look familiar, they are. They were published in June of this year and represented part one of what we planned as a two-part feature. Due to our delay in completing this series – a number of trials reports were published in the meantime [July, August and October], along with a commentary on the state of the industry [September] – we thought it best, in the interest of clarity and continuity, to publish both features together. Our apologies for the delay in completing this series.

Plants grow best within certain ranges of the various factors that make up their environment. These factors include temperature, soil moisture, soil nutrients, light, air and soil pollutants, air humidity, soil structure and pH. These factors affect all plants growing in nature.
Plants grown in a greenhouse are in an artificial environment and are subjected to different cultural practices (fertilization, irrigation, spraying with pesticides, etc.) that may affect their growth considerably.

Diseases caused by environmental   factors are called non-infectious diseases. They are caused by a lack or an excess of something that supports life. If these cases are severe, then the plant will die. But if they are only off to a certain degree, then the plant will be weak and diseases will have a better chance to take hold.

TEMPERATURE
Plants normally grow at temperatures between 15 and 30ºC. Some can survive at temperatures as low as 2-4ºC and as high as 40ºC, but obviously these extreme temperatures are damaging and the plant will not have the same defensive mechanisms.

The effects of high temperatures are usually seen in conjunction with the effects of other environmental factors, particularly excessive light and drought, lack of oxygen, or high winds accompanied by low relative humidity.

High temperatures are usually responsible for sun-scald injuries. These injuries are more prevalent on young, succulent seedlings or on plants when hot, sunny days follow periods of cloudy, rainy weather. When plants are moved from the shaded, cooler propagation area to full, hot sun in the finishing house,  a transition period is needed by applying light shade to ensure somewhat cooler temperatures.

The mechanisms by which high and low temperatures injure plants are quite different. High temperatures apparently inactivate certain enzyme systems and accelerate others, thus leading to abnormal biochemical reactions and cell death. Low temperatures, on the other hand, injure plants primarily by inducing ice formation between and/or within the cells.

MOISTURE
Moisture disturbances are responsible for plants growing poorly more than any other environmental factor. However, low moisture accompanied by high temperatures will lead to excessive loss of water from the leaves and will result in leaf scorching or burning.

On the other hand, excessive moisture due to over-watering or poor drainage will cause the fibrous roots of the plants to decay due to the reduced supply of oxygen to the roots.

Oxygen deprivation causes stress, asphyxiation and the collapse of many root cells. Wet, anaerobic conditions favour the growth of anaerobic micro-organisms which, during their life processes, form substances, such as nitrates, that are toxic to plants.

As well, root cells damaged directly by the lack of oxygen lose their selective permeability and may allow toxic metals, etc., to be taken up by the plant. Also, once parts of roots are killed, more    damage is done by facultative parasites that may be greatly favoured by the new environment. Thus the wilting of the plants, which soon follows over-watering, is probably the result of a lack of water in the above-soil parts of plants caused by the death of the roots, although it appears that translocated toxic substances may also be involved.

Another common symptom of plants caused by excessive moisture is edema. This appears as numerous small bumps on the lower side of leaves or on stems. The bumps are small masses of cells that divide, expand and break out of the normal leaf surface and at first form greenish-white welling or galls. Later, the exposed surface of the swelling becomes rust coloured and has a corky appearance. Edema is caused by over-watering and can be avoided by reduced watering along with better lighting and air circulation.

INADEQUATE OXYGEN
Low oxygen conditions are generally associated with high soil moisture and/or high temperatures. Lack of oxygen will cause destruction of roots in many kinds of plants if they are waterlogged for long periods.
A combination of high soil moisture and high soil or air temperature causes root collapse in plants. The first condition apparently reduces the amount of oxygen available to the roots, while the other increases the amount of oxygen required by the plants. The two effects together result in an extreme lack of oxygen to the roots and cause their collapse and death.

Excess light is rather rare in nature and seldom injures plants. Many injuries attributed to light are probably the result of high temperatures accompanying high light intensity.

AIR POLLUTION
The air at the earth’s surface consists primarily of nitrogen and oxygen (78 per cent and 21 per cent respectively), with much of the remaining one per cent being water vapour and carbon dioxide.
The industrial revolution and man’s activities in generating energy, manufacturing goods and disposing of wastes has resulted in the release into the atmosphere of a number of pollutants that may alter a plant’s metabolism and induce disease.

Almost all air pollutants causing plant injury are gases, but some particle matter or dust may also affect vegetation. Ethylene is a known pollutant caused by lack of heater ventilation. The plant itself can produce ethylene under high moisture conditions. It can also be caused by leaks in the cooling system (ammonia).

Damage is more commonly caused by chemicals such as hydrogen fluoride, nitrogen dioxide, ozone peroxyacyl, sulphur dioxide and particulates. High concentrations or long exposure to these chemicals causes visible and sometimes characteristic symptoms (e.g. necrosis) on the affected plants. A good example of this is the needlepoint spots on old poinsettia leaves due to nitric oxide and ozone.

Exhaust of automobiles and other internal combustion engines are probably the most important sources of ozone and other phototoxic pollutants. Thousands of tons of incompletely burned hydrocarbons and NO2 are released into the atmosphere daily by automobile exhausts. In the presence of ultraviolet light from the sun, this nitrogen dioxide reacts with oxygen and forms ozone and nitric oxide. The ozone may react with nitric oxide to form the original compounds:

However, in the presence of unburned hydrocarbon radicals, the nitric oxide reacts with these instead of ozone, and therefore the ozone concentration builds up. Ozone, too, can react with vapours of certain unsaturated hydrocarbons, but the products of such reactions (various organic peroxides) are also toxic to plants. Consequently, greenhouses near heavily populated areas and lots of traffic are not in the best location.

NUTRITIONAL DEFICIENCIES
Plants require several mineral elements for normal growth. Some elements, such as nitrogen, phosphorous, potassium, calcium, magnesium and sulphur needed in relatively large amounts are called major elements. Others – such as iron, boron, manganese, zinc, copper and molybdenum – are needed in very small amounts and are called trace or minor elements, or ‘micro-nutrients.’

Both major and trace elements are essential to the plant. When they are present in amounts smaller than the minimum levels required for normal plant growth, the plant becomes diseased and exhibits various external and internal symptoms. These symptoms may appear on any or all organs of the plant, including leaves, stems, roots, flowers and seeds.

The kinds of symptoms produced by a deficiency of a certain nutrient depend primarily on the functions of that particular element in the plant. These functions presumably are inhibited or interfered with when the element is limited. Certain symptoms are the same if there is a deficiency of any of several elements, but other diagnostic features usually accompany a deficiency of a particular element. Numerous plant diseases occur annually in most horticultural crops in many locations due to reduced amounts or availability of one or more of the essential elements in the media in which the plants are grown.

The table included within this feature (Fig. 1) lists some of the general deficiency symptoms caused by each essential element.

EXCESSIVE SOIL MINERALS
The soil often contains excessive amounts of certain essential or non-essential elements, any of which at high concentration may be injurious to the plant.

Of the essential elements, those required by plants in large amounts, such as nitrogen and potassium, are usually much less toxic when present in excess than are the elements required only in trace amounts, such as manganese, zinc and boron.

However, even among the latter, some trace elements, such as manganese and magnesium, have a much wider range of safety than do others, such as boron or zinc. Besides, not only do the elements differ in their ranges of toxicity to a certain level of a particular element, but concentrations at which non-essential elements are toxic also vary among elements, and plants, in turn, vary in their sensitivity to them. For example, some plants are injured by very small amounts of nickel, but can tolerate considerable concentrations of aluminium.

Melhem Sawaya of Focus Greenhouse Management is a consultant and research coordinator to the horticultural industry. Comments on this or any other article are always welcome by e-mailing him at focussawaya@kwic.com.

Related
Growing In The Green: September 2007
SPACE-AGE TECHNOLOGY’S SNAPSHOT OF CROP HEALTH
GROWING IN THE GREEN: April 2006
Pointers on poinsettias