Were poinsettias profitable in ’07?  Growers who started on time with well-rooted cuttings and paid attention to every detail had an awesome crop. 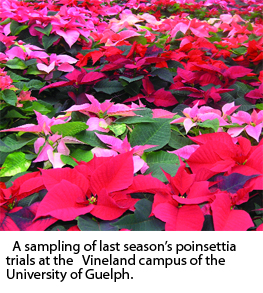 My late father-in-law used to joke on Christmas morning, “well, mother, did we make it pay?” He was teasing that they had received better gifts than the ones they had given out! It was all in fun, and, in all seriousness, they always gave excellent gifts.

Well, your Christmas poinsettia sales are over, and now I’m asking: “Did you make it pay?” Did you make a reasonable profit or did you have some flower funerals? Now is the time to regroup and evaluate the 2007 season, so that next year we can repeat what worked this year and avoid what didn’t.

Last year concluded about four years of adjustments on how we approached poinsettia marketing and production. We are very close to being able to say poinsettia is a crop we don’t mind growing:

• 2004 was the first year when the poinsettia crop sold without much drop in prices. However, the prices to begin with were rock-bottom due to the fact a good number were still being sold to wholesale brokers who, in turn, had to sell to the chain stores where the margins range from small to negligible.

In 2005, the number of poinsettias sold to wholesale brokers dropped drastically and the average prices for growers were somewhat higher for two reasons:

• The number of poinsettias produced was cut drastically.

• Due to the number of poinsettias produced being down, there was no pressure of unsold poinsettias, which would have led to a cut in prices.

Though the average price was higher, this was not due to an increase in price. Rather, it was because growers had reached the point where they refused to grow poinsettias, only to donate them at a price lower than their costs. While it has taken awhile, most growers who study their costs realize that growing poinsettia largely for cash flow reasons is a bad idea. It is a good idea for lenders because it was cash from our lines-of-credit, and this went back to the banks. There was nothing left to improve the bottom line.

The 2006 poinsettia season was the season where production, planning and marketing staff all worked to meet – but not exceed – the demand. This translated into one of the most successful seasons over the last 20 years.

This 2007 poinsettia season shed light on a few, but important, factors:

• The price of unrooted cuttings is up and the price of rooted cuttings has to keep up. This meant growers grew the product that makes a profit. There was no speculation on growing extra plants. There are few exceptions and, this season, there weren’t many growers who speculated on growing a crop without knowing where the product was going to end up. In 2006, this worked for the two per cent or so of speculated crops, but this year it did not.

This confirms the idea that it’s best to only grow what is sold or at least spoken for.

a) Add value to the consumer in looks and quality.

b) Do the same for the grower: add quality that translates into less shrinkage (e.g., rings) and higher profitability through the extra packaging. Some of the added cost in packaging last season, however, actually made the product less appealing! Make sure fancier packaging actually adds value for consumers.

• It was the same story with promo-poinsettias; they sold well, but shrinkage was higher. This was due to stores trying to sell a cheaper product and they don’t want to increase their costs on an item that won’t make money. The reality is that promo-cheaper products for Christmas do not pay off at all.

• Fundraising programs are still increasing. Growers are doing a better job communicating to groups and that is
leading to an increase in orders and, ultimately, a very satisfied consumer.

Last season was the first year we saw fundraising programs affecting the volume out of garden centres or stores. This is more noticeable when the weather is less than optimum for the simple reason that a pre-ordered fundraiser product is going to be delivered, regardless of the weather, but impulse purchases will vanish with bad weather.

• A minor shortage of 8" products for a very short period in November was offset towards the end of the month with somewhat more product than was needed. This was mainly because pre-orders fell through, along with a major snowstorm that hit Ontario on what would normally be the busiest weekend of the season.

• The formula for colour mixes is 75 per cent red and the remainder in other colours, unless you had a promotion for a specific colour. Burgundy varieties, namely ‘Cortez Burgundy,’ saw less demand last season after considerable 2006 interest. Perhaps consumers now know that the nice burgundy seen at retail too often changes to an ugly and faded red colour after a week at home. More than simply turning them off burgundy varieties, this kind of experience may discourage them from buying any poinsettia in future.

• Many growers are much more serious about costing and analyzing, in great detail, the merits of every crop grown.

If we can’t make a profit at this price, then we need to determine what price is needed to grow the crop profitably. And if we can’t get that price, we shouldn’t grow that crop. At the same time, the responsibility is still on growers to do their best to cut costs effectively and run an efficient operation. n

Melhem Sawaya of Focus Greenhouse Management is a consultant and research co-ordinator to the horticultural industry. Comments on this or any other article are always welcome at focussawaya@kwic.com.