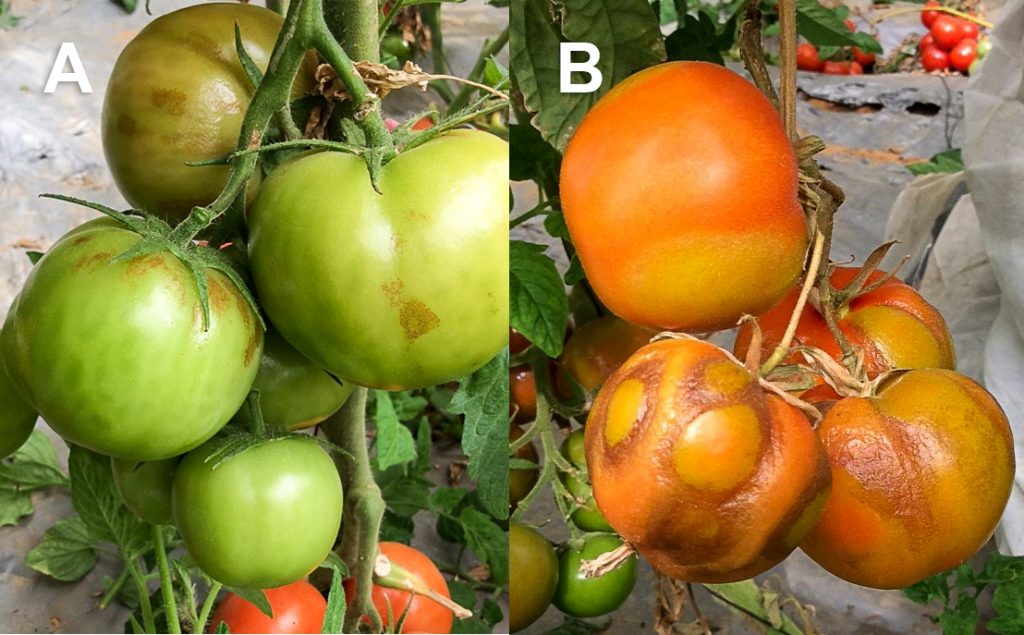 Canadian greenhouse vegetable growers are undergoing strict sanitation protocols as a new tomato and pepper virus continues to emerge in different parts of the world, including North America.

“There were a number of detections in Mexico,” says Niki Bennett, science coordinator at Ontario Greenhouse Vegetable Growers. Known as the tomato brown rugose fruit virus (known as ‘TBRFV’, or ‘the rugose’), the disease has been detected in approximately 100 cases across 20 states in Mexico. It was detected in Belgium and the Netherlands earlier this year.

“All you really need is one bad seed in a bunch,” says Bennett. Able to survive months to years outside of a plant host, the viral disease is highly contagious and can be transferred via seed, human contact, clothing, tools, containers and other surfaces such as string, poly and troughs.

According to the Cultivation Insight fact sheet provided by De Ruiter, symptoms of the rugose were first spotted in Israel in 2014 on varieties with the Tm-22 gene, which provides resistance to the tobacco mosaic virus (TMV) and tomato mosaic virus (ToMV).1 The rugose was then detected in Germany,2 southern Italy2 and California in 2018. With all of the infected plants destroyed, the disease was presumed to be eradicated in California.

Since the original publication of this article online and in June’s print issue, four cases of ToBRFV have been confirmed in Ontario. Bennett says growers should take the necessary precautions as trade pathways are highly integrated within North America. All commercial tomato varieties are suspected to be susceptible.

“The host range is still being established,” Bennett adds. Many of its known hosts exist across the country, including petunias, nightshade weeds, goosefoot weeds and tobacco. Potatoes and eggplants are not known to be affected.

Symptoms are similar to other tobamoviruses such as TMV and ToMV, says both OGVG and De Ruiter. On tomato and pepper leaves, this includes mosaic discolouration, yellowing of leaf veins and occasional narrowing of leaf blades. On the fruit, yellow spots and brown rugose (wrinkled) patches can appear. Necrotic lesions can sometimes form on peduncles, pedicels and the calyx of the fruit.

It’s easy to mistake the virus for others, due to symptoms being very similar, says Marcin Widecki, technical sales representative at De Ruiter.

The Cultivation Insight fact sheet from De Ruiter states that symptoms of the virus appear within 12 to 18 days of infection. Infection at a young age will lead to more severe symptoms, and plant stress tends to exacerbate it. Other factors such as variety, growing conditions and nutrition will affect it as well. The impact on production can be substantial, losing as much as 30 to 70 per cent yield.

De Ruiter representatives say many of their customers are taking precautions, ensuring updated hygiene protocols, closing greenhouses to visitors and limiting the movement of workers from one greenhouse to another.

As Bianca Jamieson, spokesperson for the Ontario Ministry of Agriculture, Food and Rural Affairs (OMAFRA) explains, “all recommended biosecurity measures are good practice for prevention and management of any pest or disease that has potential to spread to new locations.”

If the disease is suspected or found, OMAFRA is advising growers to send samples to a diagnostics lab, remove infected plants promptly by placing them in sturdy garbage bags, block off rows and restrict access, and rotate crops if possible.

De Ruiter has accelerated their breeding efforts to combat the rugose, but it’s not ready yet. “We recognize the importance of this, and we’ve prioritized looking into a breeding solution for it,” says Emily Hackstadt, North America marketing manager for De Ruiter. “While there’s nothing commercial on the market yet, it’s something that our team is focusing our efforts on. ”

The vegetable seed company is also taking extreme precautions against the virus and other pathogens. “De Ruiter ensures that strict hygiene protocols are put in place through the Good Seed and Plant Practices (GSPP) Certification to prevent spread of harmful infections like ToBRFV and many other viruses,” says Hackstadt.

In the meantime, awareness and education are top priorities. “Growers should train their team to not only take the right precautions, but to also understand the symptoms and how things spread,” she adds.

For more information and resources, visit: