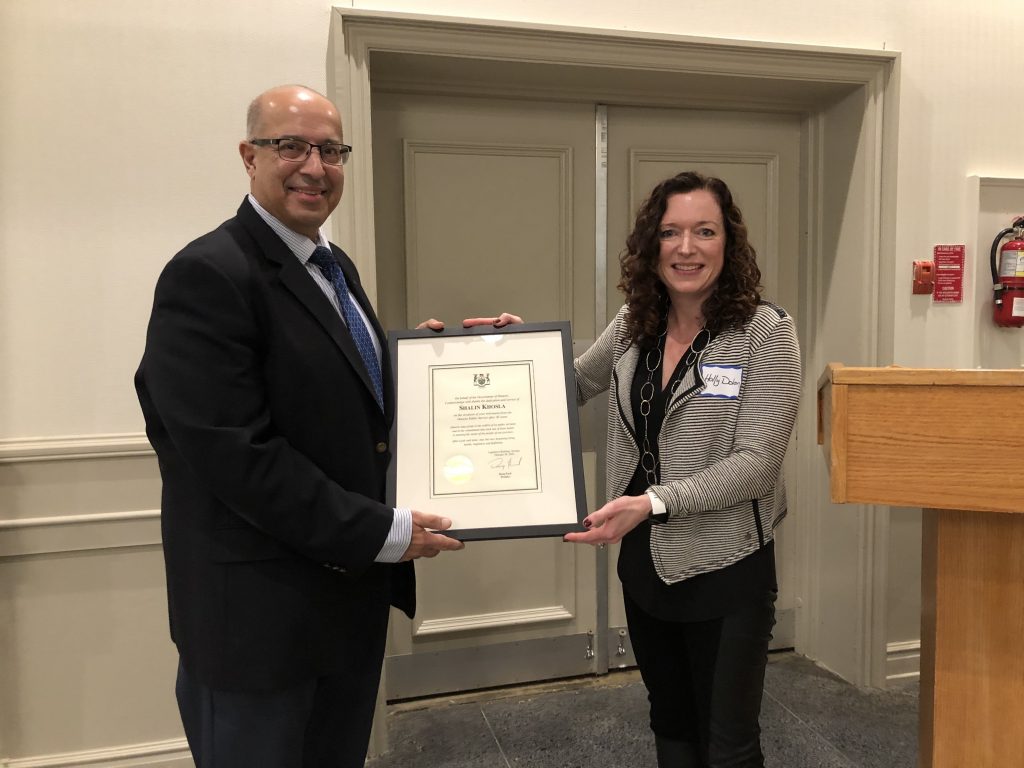 Greenhouse growers and suppliers from across the province gathered to celebrate Shalin Khosla’s career this month.

A known crop advisor, extension agent and research scientist, Khosla was the greenhouse vegetable specialist at the Ontario Ministry of Agriculture, Food and Rural Affairs (OMAFRA) for almost three decades, but was engaged in the sector long before that. Based out of the Harrow Research and Development Centre (HRDC) run by Agriculture and Agri-Food Canada (AAFC), Khosla’s expertise made him a natural link between researchers and growers. He retired in December 2019.

“Shalin made a huge contribution to the area, to the greenhouse industry,” says Tom Papadopoulos, former AAFC research scientist at HRDC who retired in 2012. “The fact that this retirement party is mostly growers speaks volumes.”

Even prior to her role at OMAFRA, greenhouse vegetable IPM specialist Cara McCreary remembers Khosla’s visits to her previous employer, a greenhouse tomato operation. “I remember those visits because it was so significant to the growers,” she says. Having worked with Khosla for the past five years, McCreary expresses her appreciation for his unwavering support of both her initiatives and the greenhouse sector. “I aspire to support the sector in the same way that he did, and that will be a lifelong career goal of mine.”

Though McCreary’s predecessor Gillian Ferguson was not able to attend, her sentiments were read, noting not only Khosla’s hard work and dedication, but also some less well-known expertise. “One of these was your ability to find any greenhouse vegetable operation in Ontario, particularly in the remote rural areas of the Niagara region,” reads McCreary on Ferguson’s behalf. “And that was in the days before we had GPS.”

Holly Dolan, manager of the Greenhouse, Agroforestry and Specialty Crops unit at OMAFRA presented Khosla with a certificate signed by the Premier of Ontario, in recognition of his retirement and outstanding career. Having just worked with Khosla for over a year, she noted that his impact on the sector was unmistakable, highlighting his knowledge, passion for advancing innovation and growth, and enthusiasm for collaborative research and relationship building – not only locally, but provincially, nationally and internationally as well. “You’ve been an invaluable member of our team,” says Dolan, “and to me as [someone] new to this role, you’ve patiently helped me navigate this innovative, fast-paced and sometimes a little complicated sector.”

“Shalin was always there to help,” says Kelly Devaere, product and marketing manager at Plant Products. Devaere’s first day on the job with Morse Growers Supplies was a visit to a commercial greenhouse. “I learned a lot from Shalin that first summer.”

For his part, Khosla credits his achievements to growers and industry partners he’s worked with over the years. “Your openness to allowing me onto your farms,” he says to the growers, “to teaching me what you were doing and allowing me to help you move forward – that was the best part of my job.” Having worked with three generations of growers, he says, “I figure it’s time to leave before I start with the fourth.”

OMAFRA put out a call for applications to fill Khosla’s position last November. “Whoever succeeds you will have very large shoes to fill,” says Celeste Little, AAFC greenhouse technician at HRDC and the day’s MC. “Or maybe it’s a shoe.”

Over 136 people attended the retirement celebration at the Roma Club in Leamington, Ont.