In a survey conducted earlier this year, greenhouse producers shared highlights from 2020 and plans for expansion, technological investments and more in 2021. 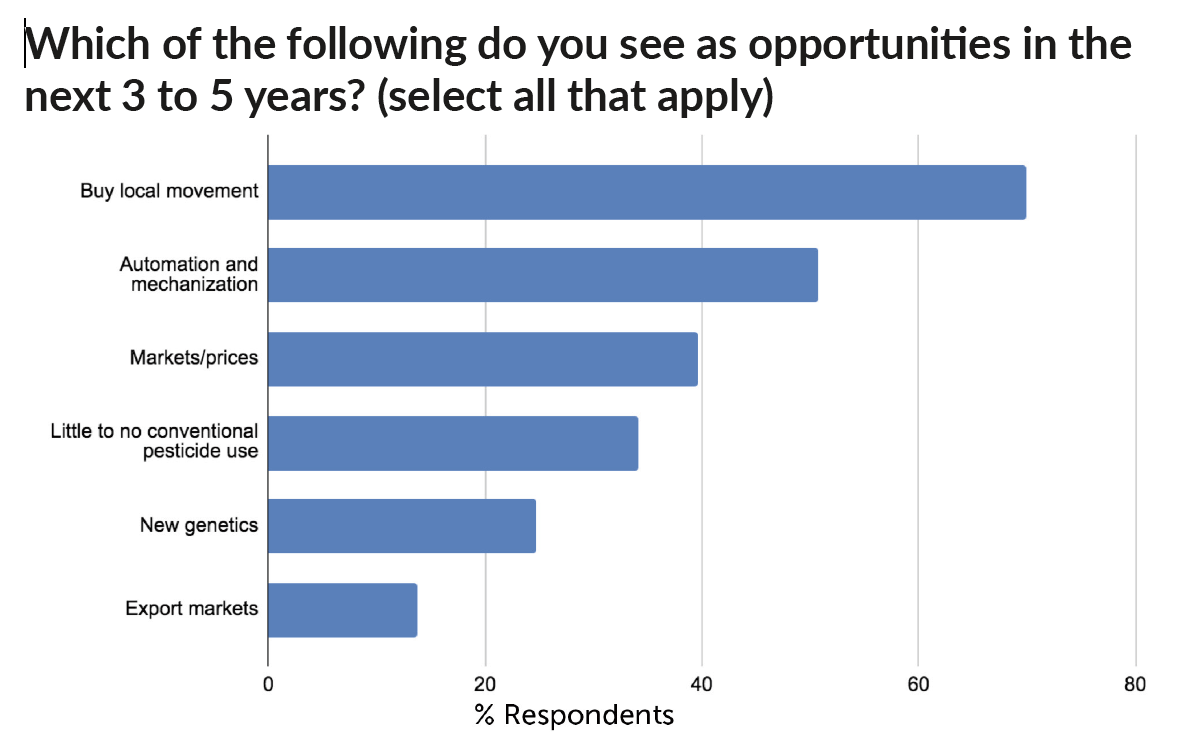 The Greenhouse Canada grower survey returned for 2021 this year, taking a snapshot of the industry as the Canadian economy continues to deal with the effects of COVID-19.

We received 75 qualified responses from producers in the controlled environment agriculture sector in Canada. Knowing that, it’s best to treat these results as informal or anecdotal. Because some growers selected a mix of different growing spaces and/or crops, percentages won’t necessarily add up to 100.

Among the respondents, 87 per cent were growing in greenhouses and 12 per cent producing in vertical farming or another type of indoor growing space.

Some chose “other”, focusing on crops such as herbs, plants used for reclamation sites or host plants for pests.

In terms of province, the majority were located in Ontario (43 per cent), followed by Alberta (28 per cent), British Columbia (15 per cent), Saskatchewan (9 per cent), with some representation from Nova Scotia, Manitoba, Newfoundland & Labrador, Quebec, Prince Edward Island, and the Yukon.

The majority grew product for their own retail shop (43 per cent), wholesalers (33 per cent), and mass merchandisers/box stores (28 per cent), followed by independent garden centres (21 per cent) and other growers (19 per cent).

We also asked growers to identify the crops they primarily grow. Here were some of the frontrunners (i.e. not exhaustive).

Breaking down the numbers a bit more, 85 per cent of retail growers said they experienced increases in sales. For wholesale growers, this was 62 per cent, whether combined or broken down by crop group.

Forecasting for 2021
Price-wise, none of the respondents indicated any plans to reduce prices. 58 per cent will be increasing them, with 50 per cent looking to raise prices by up to 10% (rounded up). 32 per cent of respondents will be holding steady.

Sales forecasts are looking great. In total, 75 per cent of respondents said they’re expecting higher sales for 2021 compared to 2020. 41 per cent expect sales volumes to be up by 10% or less, while 35 per cent expect this rise to be more than 10%. 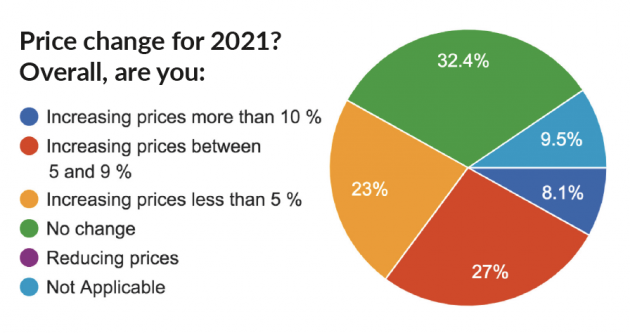 Inputs in 2020
A number of input costs rose in 2020. When asked to identify three inputs that increased the most in cost, 51 per cent of respondents identified labour and wages as one of the top. This was followed by heating, electricity, and pots/trays/containers. 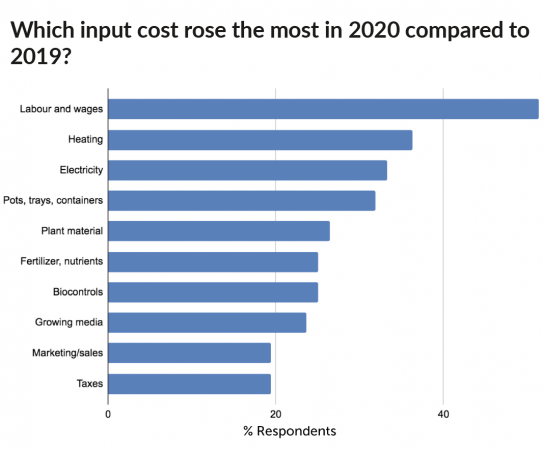 For most growers, there was no change to their use of biocontrol agents and biopesticides, regardless of whether they were applied against mites and insect pests or diseases. To clarify the definition of these products, the survey specifically noted that biocontrol agents included predators, parasitoids, and pathogens, while biopesticides included living microorganisms and chemicals derived from natural sources including mineral oil.

As for lighting, 34 per cent of surveyed growers indicated that they currently use LED lighting, with 22 per cent looking to adopt this technology in the next three to five years. In general, a greater number of producers expressed interest in adopting LED over HPS, supported by a higher level of disinterest in adopting HPS compared to LED lighting. 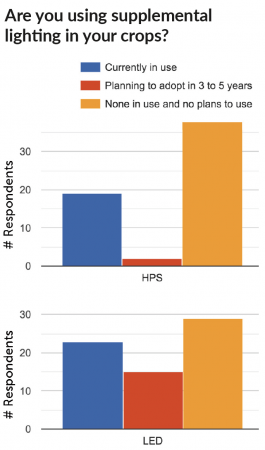 Labour
Cited as the input cost which rose the most last year, over half of the survey respondents said there were no changes to the level of labour employed in their operations last year. 38 per cent found that this number rose.

For 2021 however, 51 per cent believe that their labour needs would rise. Less than three per cent forecast a reduction in labour. 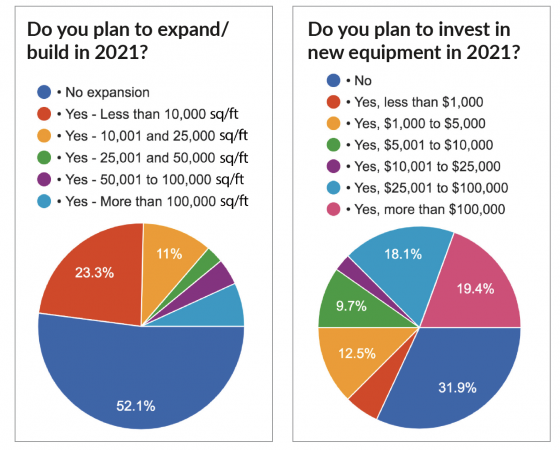 Social Media and online retail
Social media use for work was very fragmented among the respondents. 31 per cent said they use it occasionally (approximately several times per week), another 30 per cent either use it rarely (a few times a year) or not at all. 21 per cent use it frequently to very frequently, checking once or more than once per day.

Also looking specifically at retail, 54 per cent said they already have e-commerce platforms set up on their website. However, 31 per cent have stated that they do not, and have no plans to do so.

Challenges and Opportunities
Coming out of the first year of COVID, surveyed producers cited the biggest challenges as unclear regulations and temporary closures of sales points. This was followed by difficulty in recruiting local workers. Housing issues, lost or delayed temporary foreign workers, reduced markets, and issues with access to personal protective equipment all rounded out the last of the more popular answers.

Corroborating with previous answers, the majority of respondents identified increasing cost of supplies (78 per cent), energy costs (67 per cent) and increasing wages (51 per cent) as the top three business threats in the next three to five years. Only 24 per cent saw COVID as a potential threat.

As for opportunities, the buy local movement received a nod by 70 per cent of survey takers. This was followed by automation and mechanization (51 per cent) and markets/prices (40 per cent) and little to no conventional pesticides needed (34 per cent). 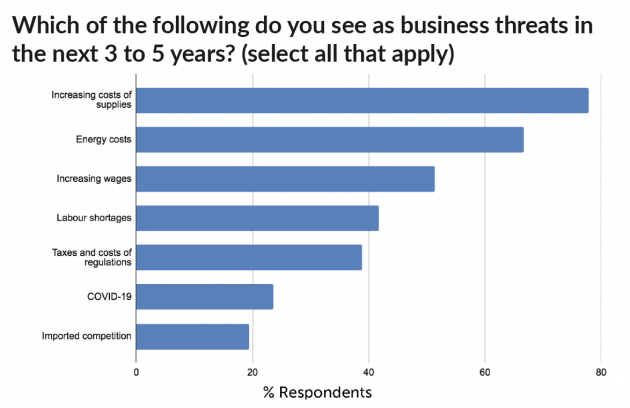