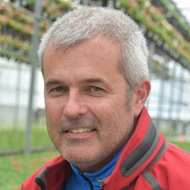 General Manager - Jeffery’s Greenhouses
Rodd Gibson is general manager of Jeffery's Greenhouses, a third generation wholesale business that was first begun by George and Anne Jeffery in 1933 and now managed by Rodd and his wife Barbara Jeffery-Gibson. With two locations – one at Lakeshore Road in St. Catharines and another in Jordan, Jeffery's has approximately 10 acres of indoor greenhouse production space at each location, with some outdoor production in Jordan. Jeffery's primary focus is bedding plants, with most of their product propagated in house from seed or unrooted cuttings. They produce more than 100 species of annuals, perennials, spring baskets and mixed containers exclusively for the mass market. A known cyclamen producer, their other crops include poinsettias, garden mums, hydrangeas and Easter lilies.
More Speakers: « Alan Cavers Aron Hoff »