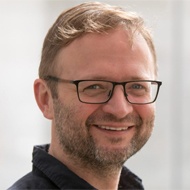 Vice President, Production - Meyers Fruit Farms and Greenhouses
Aron joined the farm full-time in 2006 to lead production when there was a steep shift to providing year-round availability of potted flowers for mass-market clientele. His enthusiasm for lifelong learning first led him to obtain a teaching degree in English and Physical Education, but after spending a few years in the classroom, his fascination with the family business drew him back to the farm.
In 2017, Aron was named Head Grower of the Year by Greenhouse Grower magazine at the "Cultivate '17" convention in Columbus, Ohio. He was also recognized with an Excellence in Leadership award for his accomplishments to which he humbly credits the entire grower team for the success Meyers has been having.
More Speakers: « Rodd Gibson Lloyd Rozema »