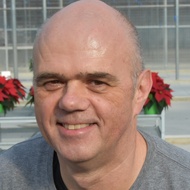 Head Grower - Jeffery's Greenhouses
Albert Grimm is a horticulturist by trade and passion. He graduated from an apprenticeship in Germany and has worked in most sectors of horticultural production (ornamentals, vegetables and nursery). He moved to Canada in the late 1980s and spent several years in greenhouse production in Québec before settling in Southern Ontario.

Albert believes that excellent plant quality is a crucial requirement for increased sales of ornamental plants in our markets, and that the key to better quality is a detailed understanding of plant interaction with the greenhouse environment. Motivated by this perspective, he has been participating in the education of professional horticulturists with guest lectures and training sessions on various aspects of greenhouse plant production.

Since 1998, Albert has been working as head grower for Jeffery's Greenhouses Inc., a major producer of bedding plants and holiday crops in St. Catharines, Ontario. Albert has previously been named Head Grower of the Year by Greenhouse Grower magazine and recognized for excellence in outreach & leadership based on his efforts to equip the next generation of growers with the skills needed to succeed.
More Speakers: Dr. Matthew S. Krause »