Greenhouse
veggies in 'Olympic' showcase
Canada
has the best food and the best athletes in the world, and the Government of
Canada showcased both in Vancouver at the 2010 Olympic and Paralympic Winter
Games. 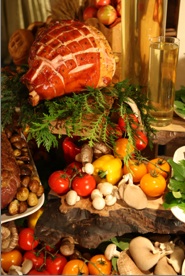 Feb. 17, 2010, Vancouver – Canada
has the best food and the best athletes in the world, and the Government of
Canada is showcasing both in Vancouver at the 2010 Olympic and Paralympic
Winter Games.

“Our Government is proud to showcase the high quality food that our
farmers produce because we know consumers at home and around the world want to
buy it,” said Ritz. “We will always maximize every opportunity to promote
Canadian agriculture. We know that increased international trade will stimulate
economic growth and deliver benefits to all Canadians.”

The breakfast brought together a team of top Canadian chefs from across
the country, including Chef at Large Michael Smith, who each prepared distinct
dishes featuring key Canadian export ingredients. The menu featured a variety
of products including wheat, beef, pork, eggs, canola oil, maple syrup,
lentils, soybeans, and ice wine, along with greenhouse tomatoes and peppers.

For more information and to view the recipes, go to www.eatCanadian.ca.