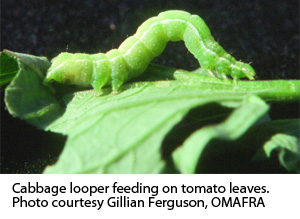 Cabbage loopers, or simply “loopers,” are a chronic pest of greenhouse vegetables. To manage this pest, growers generally rely heavily on use of Bacillus thuringiensis subsp. kurstaki (Btk), the active ingredient in several commercial products including Dipel™, Foray™, and Bioprotec™.

Since the commercialization of Btk over 30 years ago, many hoped that the problems associated with resistance to conventional chemicals would be avoided. However, laboratory selection experiments have demonstrated that several insect species have the capacity to develop resistance to Bt. To the credit of this microbial, resistance has only been reported in two instances of commercial use, in the Indianmeal moth as a result of treating grain with Bt, and in the diamond back moth as a result of repeated use in intense control programs. It is not surprising, therefore, that repeated use of Btk in greenhouse crops could result in resistant looper populations.

RESISTANCE TO Bt IN GREENHOUSE POPULATIONS
A study carried out by researchers at the University of British Columbia between 2000 and 2002 indicated that resistance in loopers in greenhouse vegetables was related to the level of Btk applications. The higher the number of applications, the higher the level of resistance observed in the looper populations.

Laboratory studies also confirmed that the total amount of Btk applied was significantly related to the levels of resistance observed.

The good news is that resistance declined in several of the resistant populations when they were no longer exposed to Btk. A significant reduction in resistance was observed after two to five generations (there is indication that loopers can have over six generations per year in greenhouse crops).

Preliminary observations by these researchers also indicated that Btk remained active in greenhouses in British Columbia for about nine days. Other studies by these same researchers further suggest that resistance may be most difficult to manage in cucumbers because of the suitability of this host for development of loopers. Peppers were the least suitable, and tomatoes were intermediate. Host suitability was measured by survival, development rate and body size of the loopers.

MANAGEMENT OF RESISTANCE TO Bt
In a similar manner for chemical products, reducing or delaying development of resistance in loopers to Bt is dependent on minimal usage of Bt products. In addition, growers need to adopt and incorporate as many techniques as possible for reducing looper populations. Such techniques can include the following:
1Where registration permits, rotate with Confirm™. This product has a different mode of action from Bt. Whereas Bt disrupts the midgut of loopers causing starvation and blood poisoning, the active ingredient in Confirm mimics the natural insect moulting hormones. Absorption of this chemical stimulates premature moulting and death. Studies also indicate that when adult insects are treated with this product, their reproductive abilities are greatly reduced, partly because of negative effects on egg and sperm production.
2Regularly monitor crops for early detection of loopers. The youngest caterpillars are most susceptible to Bt products and Confirm.

3UV Light traps. Such traps use a combination of UV light for attracting adult stages or moths, and a low-voltage electrocutor for killing the insects. Light traps are best used during the cooler months of the year when outdoor temperatures are 10ºC and less, to avoid the problem of attracting more flying pests into greenhouse. However, during the warmer months of the year, the traps may be better placed outside of the greenhouse, at a safe distance, to attract adults away from the greenhouse. Or, if such traps are used inside the greenhouse at this time of year, the size of the vent opening has to be minimized.

4 Biological Control. Parasitic wasps that may be released to assist in suppression of loopers include several species of the egg parasitoid, Trichogramma sp. and a larval parasitoid, Cotesia marginiventris sp.

Gillian Ferguson is the greenhouse vegetable IPM specialist with the Ontario Ministry of Agriculture, Food and Rural Affairs in Harrow. • 519-738-2251, ext 406 or gillian.ferguson@omafra.gov.on.ca