Broad mites (Polyphagotarsonemus latus) attack young growing plant parts and cause pronounced stunting and even death of the growing point. Various studies suggest that species of Amblyseius or Neoseiulus have potential for managing this mite. 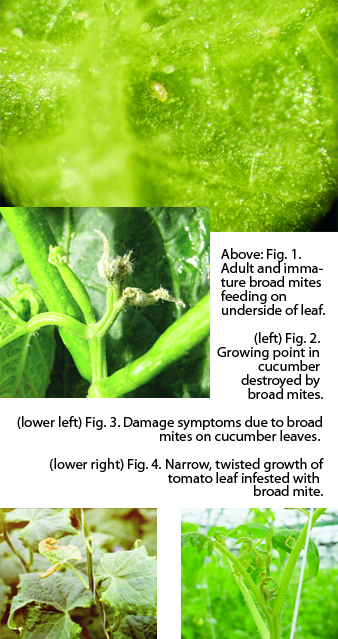 The broad mite, (Polyphagotarsonemus latus), is a cosmopolitan pest of more than 100 plant species, including many weeds, and ornamental and vegetable crops. It is more commonly found in the tropics and subtropics, and in greenhouses in temperate regions. The minuscule size (less than 0.2 mm long) of this mite enables it to feed and multiply unnoticed until its population has grown so much that the impact of its feeding on the plants becomes obvious (Fig. 1). However, unless one is familiar with the damage symptoms caused by the feeding of broad mites, the damage may be mistaken for that of herbicide contamination or a virus infection.

FEEDING DAMAGE OF BROAD MITES
They attack young growing plant parts and cause pronounced stunting and even death of the growing point (Fig. 2). Infested tissue appears bronzed, leaves may display down-curling of margins (Fig. 3), flowers may abort, young fruits are bronzed and may crack, and shoots grow narrow and twisted (Fig. 4).

RELATIONSHIP WITH WHITEFLIES
Adult whiteflies assist in the spread of broad mites by allowing the mites to cling firmly to their legs. Studies at The Land at EPCOT Centre in Florida have demonstrated that within one hour of landing on broad mite-infested eggplants, 48 per cent of silver leaf whiteflies had at least one broad mite attached. After four hours, 87 per cent of the whiteflies had mites attached.

BIOLOGICAL CONTROL
Various studies suggest that species of Amblyseius or Neoseiulus have potential for managing this mite. These species include barkeri, californicus and cucumeris. Studies with N. barkeri on peppers at The Land, Florida, found that three weekly releases of five N. barkeri per main stem provided adequate protection from broad mite injury for over seven weeks. In Italy, laboratory trials demonstrated that N. californicus was able to feed, develop to maturity, and lay eggs using broad mites as prey or food. Finally, in Israel, work carried out between 1999 and 2002 with N. cucumeris in pepper crops grown in walk-in tunnels indicated that the release of 600 predators on every plant or every second plant were effective in controlling broad mites.