Greenhouse vegetable growers have a new tool for managing two-spotted spider mites. This product offers them new chemistry for managing TSSM in IPM programs, particularly those that incorporate the use of biological control agents. 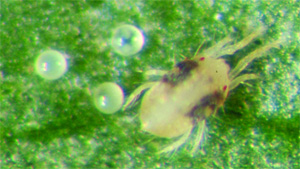 Use of Floramite SC™ for management of two-spotted spider mites (TSSM) on greenhouse cucumber, tomato, and pepper was recently approved in Canada by the Pest Management Regulatory Agency. This product offers greenhouse vegetable growers new chemistry for managing TSSM in IPM programs, particularly those that incorporate the use of biological control agents.

Mode of action and effectiveness: Floramite is a non-systemic miticide that kills TSSM by disrupting the nervous system. Although Floramite is primarily active against the adults and nymphs of spider mites, it also has activity against eggs. Floramite kills TSSM by contact activity within three days and persists on the plant surface for up to about 28 days. Investigations done by Les Shipp and collaborators at the Greenhouse & Processing Crops Research Centre (GPCRC) in Harrow showed that the label rate (133 ml/400L water) resulted in 95 per cent mortality of TSSM after 48 hours. Using the same rate in greenhouse trials on cucumber, when TSSM were exposed to residues that were 14, 21 and 28 days old, the mortality was 92, 78 and 61 per cent respectively.

For maximum effectiveness under commercial conditions, the non-systemic nature of this product requires thorough coverage of upper and lower leaf surfaces. In addition, to avoid degradation of the active ingredient, solutions should be mixed in water held at room temperature (about 23˚C) and with a pH of 5 to 6. Floramite degrades rapidly when stored or mixed with hot, alkaline water.

Compatibility with beneficials:  Laboratory studies at GPCRC, also by Les Shipp and collaborators, have demonstrated that Floramite is selective in its activity and is compatible with the use of beneficial arthropods. These studies indicate that Floramite is harmless to some of the most commonly used biological control agents in greenhouse crops. When exposed to one- to seven-day-old residues of Floramite applied at four times the recommended rate on cucumber, the mortality in Orius insidiosus, Encarsia formosa, and

Phytoseiulus persimilis after 48 hours was approximately six, three and 14 per cent respectively.

Another study carried out in Australia indicated that exposing P. persimilis to Floramite residues had minimal effect on egg-laying and mortality during the treatment period of four days. In addition, immersion of female P. persimilis in a Floramite solution for 30 seconds did not affect the number of eggs laid, percentage eggs hatched, nor larval development.

Observations from this research also indicated that Floramite appeared to have a somewhat repellent effect. Such an effect may cause predators to move to untreated areas, but this would likely happen anyway due to lack of live prey on the treated areas.

With regard to bees, other studies indicate that direct application of Floramite to bees should be avoided because it is moderately toxic to them. Dried residues on foliage, however, are safe to bees.

Resistance management: To ensure that Floramite remains effective, growers need to avoid or minimize the development of resistance by implementing the following recommendations:

1. Use Floramite as per label recommendations.

2. Use Floramite as part of an IPM program in which monitoring is routinely carried out to facilitate early detection of pests, and to monitor populations of pests and biological control agents.

3. Use biological control as the major strategy for managing TSSM; Floramite should only be applied to regain a favourable predator:pest ratio.

5. Rotate Floramite with other miticides that are currently registered for use on greenhouse vegetables if chemical control is the major strategy.

As with all other pesticides, all labels should be carefully read for directions, and all safety precautions taken.

Gillian Ferguson is the greenhouse vegetable IPM specialist with the Ontario Ministry of Agriculture, Food and Rural Affairs in Harrow. • 519-738-2251, ext 406, or gillian.ferguson@omafra.gov.on.ca