Bacterial canker control trials.  This major disease can cause significant losses in both field and greenhouse tomato crops. 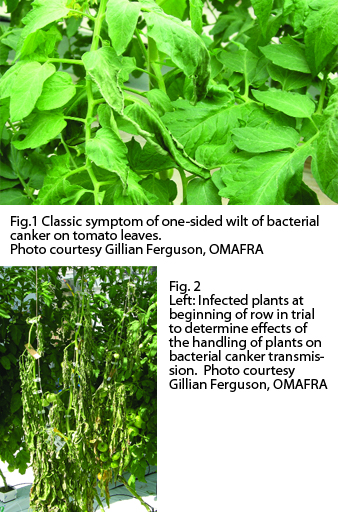 Bacterial canker (Fig. 1), caused by Clavibacter michiganensis subsp. michiganensis, is an important disease of tomato worldwide, and can cause significant losses in both field and greenhouse crops. Between 2004 and 2006, a project on bacterial canker was undertaken by Dr. Mike Tu in collaboration with the author of this article, at the Greenhouse and Processing Crops Research Centre in Harrow, Ontario. This project dwelt principally on infection and survival studies. This article will focus on infection studies that were conducted to assist in understanding potential means of transmission of the canker bacteria in greenhouse tomato crops.

POTENTIAL AVENUES OF INFECTION
n This study looked at:
1.    The effect of injuring roots of seedlings
2.    Age of seedling at time of infection
3.    Infection via wounds left after cutting off the lowest leaf with a scalpel
4.    Infection via uninjured leaf surfaces
5.    Infection by soaking seeds in a bacterial suspension for three hours.

Tomato seedlings were raised in rockwool plugs, transplanted onto rockwool blocks, and observed under greenhouse conditions. The age of the seedlings at time of infection for most of the treatments was 36 days. For investigating the effect of injury via the roots, both 17-day-old and 36-day-old seedlings were used. Roots of these two sets of seedlings were either uninjured or injured by trimming the roots prior to dipping in a bacterial suspension.

INFECTION POTENTIAL OF CONTAMINATED MEDIA
n This trial sought to determine whether canker-contaminated rockwool slabs could serve as a source of infection for seedlings. Thus, healthy seedlings with injured (roots clipped) and uninjured roots were planted onto rockwool slabs that previously held plants that were heavily infected with canker. Assessment after several weeks showed that on average, 69 per cent of the uninjured seedlings and 100 per cent of the injured seedlings developed disease symptoms.

INFECTION POTENTIAL OF CONTAMINATED KNIVES
n This trial investigated the potential of knives, used to trim leaf petioles near the stem, as a means of disease transmission. A knife that was first dipped in a bacterial suspension was used to cut the leaf petiole of the lowest leaf close to the stem. Plants were then observed for disease development. The final outcome was that all plants cut with the contaminated knife developed signs of infection. Internal examination showed vascular browning that travelled upward from the point of infection.

INFECTION POTENTIAL OF HANDLING PLANTS DURING NORMAL CULTURAL PRACTICES
n The objective of this study was to determine whether canker could be spread from infected plants to adjacent healthy plants by carrying out regular maintenance operations, such as twisting plants onto support strings, clipping, de-suckering, and leaf removal, all without any use of tools for cutting. This trial included an un-inoculated and inoculated treatment. The inoculated treatment was replicated six times, and each replicate consisted of two single rows, with 12 plants per row.

For each replicate, the first three plants in only one row were inoculated with the canker bacteria. All activities (twisting, clipping, etc.) were done in only one direction, i.e., from infected to non-infected plants (Fig. 2). After 14 weeks, no un-inoculated plants showed symptoms. In all six replicates, the plant immediately following the diseased plants was tested for presence of the canker bacteria. Only one plant tested positive from tissues taken at the top of the plant.

In summary, wounding of plants, such as by clipping leaves, cutting off fruit clusters, and damaging roots during transplanting, facilitate transmission of bacterial canker in tomato crops. Handling of plants during normal maintenance operations appears to carry a low risk of transmission, except if wounding occurs. Growing media that held diseased plants can serve as a source of infection and their reuse should be avoided, unless they can be steam-sterilized. In addition, the older a plant is when infected, the longer it takes to succumb to this disease.