Use of Decree for Botrytis control in greenhouse tomato crops.  Botrytis cinerea is one of the most commonly occurring disease-causing
organisms in greenhouse crops. Management of Botrytis or Grey mould
depends heavily on sanitation and good management of the environment. 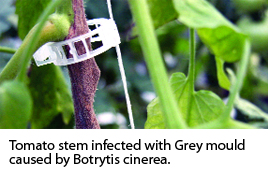 Botrytis cinerea is one of the most commonly occurring disease-causing organisms in greenhouse crops.

Management of Botrytis or Grey mould depends heavily on sanitation and good management of the environment. Chemical control with a product such as Decree™ (fenhexamid), registered in May 2003 for management of Botrytis, can also play an important role in the suppression of this disease. Having some insight into the mode of action of Decree will assist growers in understanding how this product works, and therefore, how it should be best used.

HOW BOTRYTIS INFECTS TISSUE
Before addressing how fenhexamid works, we need to understand a bit about the biology of the fungus first.

Botrytis cinerea can attack live plants but can also survive on dead plant tissue. Infections can take place via spores (technically termed conidia) which germinate, very much like seeds would, and send out a germ tube that extends and makes its way into the plant tissue. Once inside the tissue, the fungus branches and grows and produces a mat of fine filaments, which together are called “mycelium.” From this mycelium, specialized filaments produce numerous spores, which are then released to continue the infection cycle.

To the naked eye, Botrytis spores appear greyish, hence the name “Grey mould” (see photo of Botrytis-infected tomato stem). Botrytis cinerea can also produce structures, called sclerotia, which are produced under cool conditions (11-13ºC) and can withstand unfavourable conditions. In general, temperatures that favour sclerotial production depress mycelial production and vice versa. It is likely that under greenhouse conditions, the majority of Botrytis infections originate from growing mycelia as well as spores.

HOW DECREE WORKS AGAINST BOTRYTIS
Laboratory investigations by Bayer scientists observed that untreated Botrytis spores can germinate within a few hours, develop a short germ tube, and penetrate plant tissue within 24 hours. After a further 24 hours, the fungus can colonize the plant tissue, resulting in cell breakdown and tissue damage. But when spores were exposed to fenhexamid, many spores germinated but germ tube growth stopped prematurely. Residues of fenhexamid at 10-100 ppm (concentrations that are far below registered rates) reduced germination of spores and limited growth of the germ tubes. At 48 hours after exposure of spores to leaves with 10 ppm fenhexamid, their germ tubes had completely collapsed before they were able to penetrate the leaf. The plasma within the ungerminated spores and the germ tubes coagulated and this was interpreted as a sign of cell death.

In addition, because leakage of plasma from the germ tubes of Botrytis spores was frequently observed, they assume that fenhexamid also interferes with the integrity of its cell walls resulting in weakened, ruptured walls.

In summary, fenhexamid does not inhibit germination of the spores, but it does prevent germ tube growth and mycelial development. Thus, fenhexamid provides protection from Botrytis by preventing infection and establishment.

IMPLICATIONS FOR BOTRYTIS MANAGEMENT
The mode of action described here for fenhexamid or Decree indicates that because of its preventive mode of action, this product is best used as a protectant. There is no suggestion thus far that this product has curative activity.

This approach is in concert with other strongly advocated strategies, which are all preventive in their approach. These strategies include management of temperatures and relative humidities such that dewpoint is never attained, ensuring good air circulation within the crop canopy, completion of tasks (such as deleafing and any wound-creating activity) sufficiently early in the day to allow drying of wounds, and removal of as much debris as possible because this will serve as food sources for B. cinerea. Most of all, Decree must be rotated with other registered products to minimize development of resistance. Only by combining these strategies can we hope to maintain the susceptibility of Botrytis to Decree and other fungicides used for its management, and to extend their useful lives.

Gillian Ferguson is the greenhouse vegetable IPM specialist with the Ontario Ministry of Agriculture & Food, at Harrow, Ont. • 519-738-2251 ext. 406, or gillian.ferguson@omafra.gov.on.ca