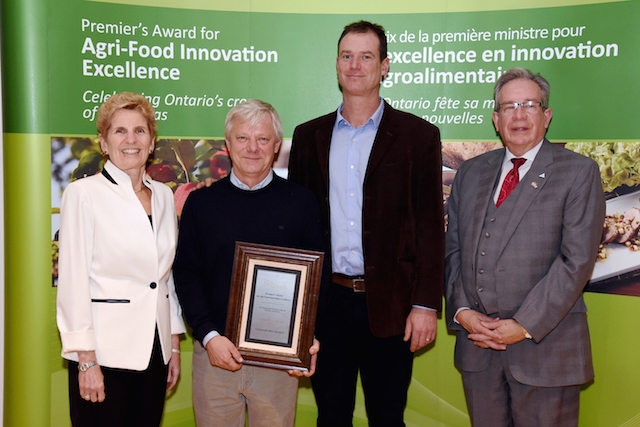 The company’s state-of-the-art facility grows nutrient-dense sunflower sprouts, pea shoots, wheat grass and other microgreens that can be produced on an average 10-day growth cycle, with a shelf life of 13 days.

“Ontario’s agriculture sector is internationally recognized because of the dedicated, passionate and skilled workers behind it,” said Wynne. “Congratulations to all of this year’s winners and finalists for asking the imaginative questions that have led to these made-in-Ontario innovations.

“And thank you to everyone in agri-food for playing a vital role in creating the industry’s jobs of tomorrow, as well as making Ontario even more competitive in the global agri-food market.”

Looking for fresh, local arugula sprouts in February? Greenbelt Microgreens has you covered. The greenhouse operation has developed an eco-friendly process for growing organic microgreens such as lettuce, arugula and wheatgrass year-round right in Ontario’s Greenbelt.

Since 2010, the producers have experimented with growing mediums, seed types and mechanized harvesting equipment. Those efforts have paid off. Thanks to their innovations, Greenbelt Microgreens is 80 times more efficient than open field production.

Supplemental LED lighting has decreased growing time by 30 per cent, while a unique soil mix that includes organic fertilizers, fish emulsion and coconut fibre also helps to maximize yields. The results are nutrient-dense sunflower sprouts, pea shoots, wheat grass and other microgreens that can be produced on an average 10-day growth cycle and boast a shelf life of 13 days – the longest in the industry. Today, the company has become the largest grower of organic microgreens in Canada, supplying fresh produce to hundreds of retailers such as Longo’s, Sobey’s and T&T Supermarket.

The awards program recognizes the many accomplishments of Ontario farm community.

“ I’d like to congratulate this year’s recipients and thank them for their commitment to strengthening Ontario’s world-class agri-food sector and positioning our province for continued economic growth.”

•    In 2017, fifty innovators from across the province were recognized with regional Agri-Food Innovation Excellence Awards.