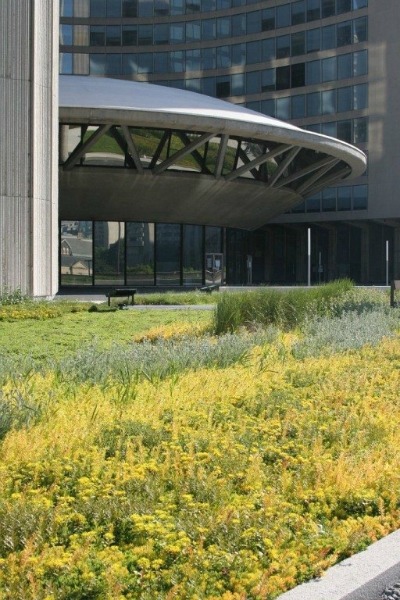 LiveRoof Ontario, Inc., a division of Hillen Nursery, Inc., grew the city hall’s green roof at its nursery near London. LiveRoof Ontario and Flynn Canada have collaborated on multiple projects.

Most recently, the two companies completed the Yorkdale Mall in Toronto. This green roof features over 67,000 square feet  (1.5 acres) of trial-tested and proven plants.

In addition to using plants well-established in soil specially engineered for the extremes of a rooftop environment, the LiveRoof system features a patent-pending hybrid design combining the best features of all green roof systems. The system’s unique design allows for reduced municipal maintenance costs for the city hall’s green roof.

• Click here for more information on Gardens in the Sky.

• LiveRoof, LLC is a leading horticultural science company in the green roof industry. Its technology is showcased in over 800 installations that total more than three million square feet.