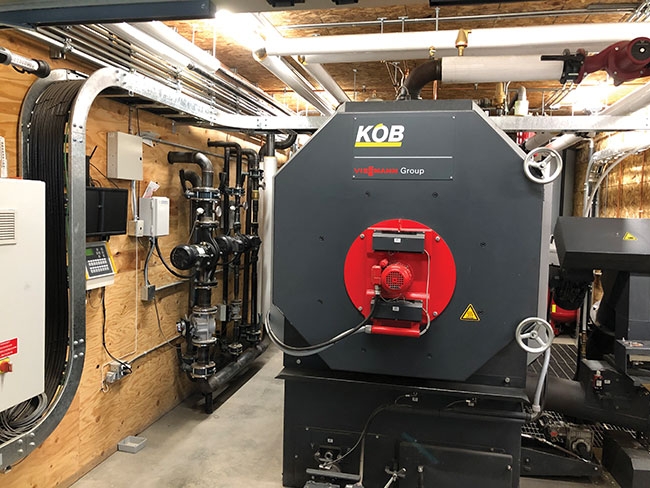 “The learning curve is pretty steep,” admits Lorne Metropolit, owner and operator of Yukon Gardens in Whitehorse, Yukon. Like many other experienced greenhouse growers, he was used to doing most tasks manually before. With the help of his friend and experienced greenhouse consultant, Dr. Mohyuddin Mirza, as well as other experts in the horticultural trades, Metropolit was able to make his state-of-the-art greenhouse a reality.

Completed last spring, their new 30,000 sq. ft hydroponic vegetable greenhouse is climate-controlled through a new computer system. But unlike many other greenhouses in more southern climates, Metropolit’s latest expansion runs on an automated biomass boiler.

Log firewood burning is a very common way to heat homes in this region, he says, and they’ve been using outside boilers for the past 30 years. “The novelty wears off when you get up at four o’clock every morning to feed the boilers.”

Now with the new boiler system from Europe, fuel is delivered to Metropolit’s operation in the form of wood chips, which are kept in a storage bin and automatically fed into the new boiler through an auger. The heating system is phenomenal, he says, with a nice, even and constant flow. The manufacturer and distributor both monitor the performance of the boiler, and are available by phone to assist with any issues 24/7.

As for the source of fuel, Metropolit’s operation is making use of standing dead trees in the Haines Junction area, approximately 90 miles from his operation. “Many years ago, we had a huge infestation of spruce beetle,” he explains. Rather than letting the trees rot and release greenhouse gases during the process, the wood is processed into wood chips, which are then purchased by Metropolit.

There’s another source of biomass that may soon emerge for the greenhouse. It’s part of an approach called Firesmart, he explains. Enacted by the Yukon government, the program clears and thins out spruce and pine around populated communities to reduce the possibility of a wildfire.

According to the 2016 Yukon Biomass Energy Strategy document, close to $60 million is spent annually on fuel and electricity to generate heat in the territory, where three-quarters is made up of imported fossil fuels. With this biomass strategy in place, the territory plans to reduce its dependence on imported fossil fuels, and instead, meet their heating needs using wood harvested in the Yukon.

However, the report also notes the challenges involved in growing a biomass energy industry. For one, older woodstoves and outdoor boilers can be inefficient, releasing particulate matter into the surrounding air. The territorial biomass strategy would require modern, more efficient biomass systems that burn more cleanly and are equipped with automated fuel feeds – much like Metropolit’s.

Second, the process of harvesting would need to be managed from a sustainability standpoint, while minimizing social and environmental impacts. According to the territory’s report, 112,000 hectares of forest in the Yukon are consumed by forest fires each year. “This represents nearly 200 times more wood than is currently harvested for energy use in the territory.” That would open up opportunities for salvaging wood previously damaged in burned areas, infected by insects, produced by sawmill waste or discarded from tree thinning or clearing FireSmart activities.

Local production costs are high
“The majority of the vegetable production up here is outdoors, and that doesn’t come on stream until mid-to-late June,” says Metropolit. The territory depends on food, fuel and other supplies transported by truck, but it’s a trip that can be hampered by Mother Nature, including spring washouts on the Alaska highway or forest fires.

With new horticultural technology on the market, locally produced vegetables are becoming more feasible. It’s also more environmentally friendly compared to hauling food over long distances by diesel-fuelled trucks. But running a greenhouse isn’t exactly cheap. For Metropolit, the costs of building the greenhouse and keeping it heated make up some of his highest expenses. Because of this, it’s more costly to produce vegetable up north than it is to import them by truck, he says.

Although his products are priced about five to 15 per cent more, the ‘buy local’ movement has been a gamechanger for them. “If you want a high-quality tasting tomato, you try to harvest it as late as possible and still be acceptable to the market,” says Metropolit. “We’ll harvest in the morning [and] it’ll be in the grocery store by noon.” Produce from southern climates such as California, Mexico or Ontario are more likely to be picked pink to ensure their survival during the shipping process. “They taste green [and] they don’t have the sweetness [or] the flavour,” he explains, “which is to the benefit of local producers.”

With the high costs of building the greenhouse, Metropolit decided to forego supplemental lighting. “A lot of places in Alberta will grow year-round without lights,” he explains. Production during the darker months may not be as optimal as the summer months – they receive close to 22 hours of daylight on June 21 – but they’ve also found that there is enough natural light by mid-February to grow without electrical help. With the high costs of installing the lights and running them, other areas took precedence for the high-tech operation.

The cost of obtaining his plant material, for instance, isn’t small. Metropolit’s seeds are sourced from the Netherlands, and while the majority of the plants are started at their greenhouse, about one-third of the plants come from a propagator in the Lower Mainland area of British Columbia. Even with all of the proper precautions taken, Metropolit says about 10 to 60 per cent of his plants were lost during the shipping process due to cold weather conditions last year. This year, it was 10 to 20 per cent. He has to send twice as many seeds to the propagator to ensure that he receives the number of plants that he needs. But still, it’s worth contracting out the work to ensure it’s done with the right expertise.

Another problem complicated by the Yukon climate is humidity control within the greenhouse. “It’s difficult for us to open our vents in the middle of winter,” says Metropolit, so he brought in dehumidifiers from Israel, distributed through Envirotech in the U.S. “They do cost a little to operate,” he explains, but it’s a small cost compared to the heat lost through open vents. Not only that, but the amount of snow on the vents makes them dangerous to open up, he adds.

From flower bed to food garden
First started as a botanical show garden in 1985, Yukon Gardens began growing and selling flowers over the years, eventually getting into vegetable production about 25 years ago.

“Older people like the flowers and walking through gardens,” Metropolit says. “The younger crowd nowadays aren’t into it as much, and as a result, many botanical gardens are now either closing or changing.”

In addition to running one of the largest garden centres in northern Canada, Yukon Gardens can now produce vegetables for 10 months of the year. “Back then, we didn’t have this philosophy of buying local,” he adds. “If you couldn’t match or beat Mexican tomatoes, you didn’t sell any.” Now, Metropolit finds that his use of biological controls resonates with his customers who are looking for pesticide-free produce.

With the high influx of tourists and gold miners in the summer, the transient rise in population drives up demand for fresh produce. “The grocery stores depend on us,” says Metropolit, but their orders are cut by half during the off-season, leaving the greenhouse operation with excess produce. “We could find other markets, but when our initial markets start to heat up, we would have to cut [the new markets] off.” The excess produce doesn’t go to waste either. Yukon Gardens donates two to three times per week to a local food bank.

To get the word out about their locally grown produce, marketing has become an integral part of the business. “It’s a totally different horticultural world now,” says Metropolit. For someone who is used to putting in 14 to 16 hours per day planting, watering and digging, he leaves the social media and website maintenance to his daughter Kelsey, who returned to the family business following a horticultural program at Olds College in Alberta.

A Saskatchewan-native from a town called Cudworth, just south of Prince Albert, Metropolit eventually moved up to the Yukon for “hunting, fishing and adventure,” he says. Working as a teacher during the winter while dabbling in horticulture in the summer, he eventually opened up Yukon Gardens with the support of his wife. As for his inspiration, Metropolit says one of his earliest photographs was of himself in a stroller, parked on a narrow sidewalk, as his green-thumbed grandmother worked on a perennial flower bed. “I learned my trade by eating pansies,” he laughs.

Related
Winter efficiency: Curtains, boilers and coverings
Bringing down the curtain on winter energy costs
What your energy screens say about you
The latest on lighting