June 3, 2013, Wageningen, the Netherlands — How do plants first know they’re under attack by fungi?

June 3, 2013, Wageningen, the Netherlands — How do plants first know they’re under attack by fungi?

Together with several partners, scientists from Wageningen UR have discovered that RLP-receptors located at the outside of plant cells and playing an important role in plant defence, join forces with other proteins present at the same location to warn the plant when a fungus attacks.

This finally answers a question that has been haunting several plant scientists around the world for many years. The findings provide new leads for breeding crops with an improved defence against diseases caused by pathogenic microbes. 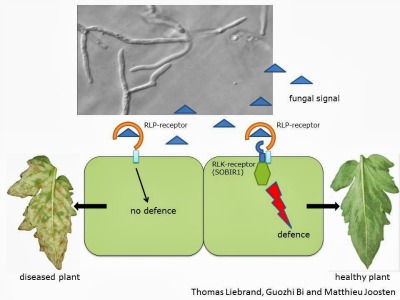 Plants are constantly challenged by pathogens such as fungi and bacteria. They almost always succeed in warding off pathogens by using special receptors, either present at the outside or inside of the plant cell, to identify the pathogen.

The receptors located at the outside usually also have a domain that protrudes through the cell membrane into the cell. This is used to warn the cell and stimulate the plant cell to take action. This generally results in a ‘programmed cell death,’ ensuring that the fungus, for example, can no longer enter the cell and absorb nutrients.

Although much is known about the defence system of plants, there are still quite some mysteries to be solved.

For some time, for example, researchers knew about the existence of so-called RLK-receptors. These receptors are located at the cell membrane of the plant cells and have a domain on both the inside and the outside of the cell.

Whenever they receive a signal on the outside – from a fungus, for example – the part on the inside of the cell (the kinase) activates the signal to mount a defence response against the invading fungus.

In addition to RLK-receptors there are also RLP-receptors. These are also located at the cell membrane, but they do not have a kinase domain on the inside of the cell to pass on signals. For over 20 years, scientists have been mystified as to how these receptors manage to warn the plant to enable it to protect itself against pathogens.

The first RLP-receptor was identified in tomato plants about 20 years ago. It is now known that all plant species contain such RLPs. For example, tomato contains around 180 different RLPs.

Scientists developed the hypothesis that RLP-receptors involved in defence against attacking microbes possibly work together with RLK-receptors to pass on signals, but such an RLK-receptor remained to be identified.

After purifying an RLP-receptor complex from leaves of tomato plants, Wageningen UR scientists have now discovered that a number of RLP-receptors do indeed recruit an RLK-receptor, referred to as SOBIR1, in order to warn the cell for fungal attacks.

Switching off the gene for this RLK-receptor cause the RLP-receptors to be non-functional. The scientists have shown that RLP-receptors cannot warn the cell without cooperating with SOBIR1 and their research results have been published in the scientific journal Proceedings of the National Academy of Sciences of the United States of America (PNAS).

As all plant species use RLP-receptors to protect themselves against pathogens, and all contain a gene closely related to SOBIR1, this RLK-receptor is highly likely to be an essential and universal link in the defence system of plants.

The discovery provides many opportunities for further studies on this type of defence system. Once more is known about the essential links in plant defence systems, it will be easier to breed plants that are more resistant to pathogenic microbes, which in turn would lead to a reduced use of pesticides.

The Wageningen UR scientists will now continue to study what exactly occurs in the plant cells once the SOBIR1 kinase sends out warning signals.

The research was performed by scientists from the Laboratory of Phytopathology, together with colleagues from Plant Research International (PRI), the Centre for BioSystems Genomics (CBSG) and the Sainsbury Laboratory in the U.K.

It was financed by the Centre for BioSystems Genomics (CBSG), the Netherlands Organisation for Scientific Research (NWO) and the Gatsby Charitable Foundation.