Features
Good things come to those who innovate 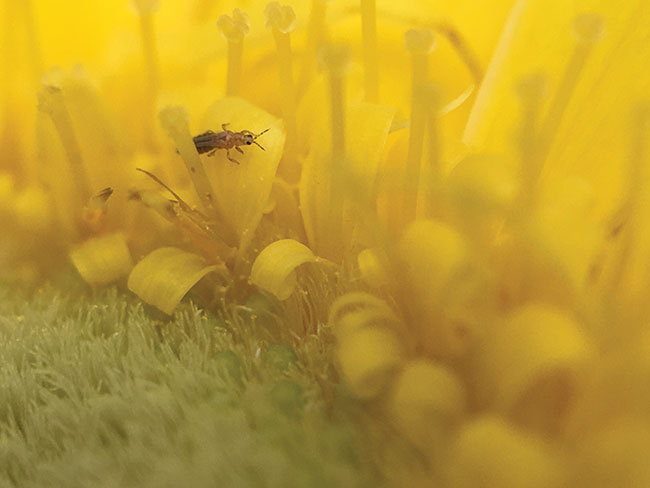 Vineland Research and Innovation Centre’s (Vineland) grower surveys of the past eight years indicate that the use of biocontrol in Canadian floriculture greenhouses is still increasing. But it’s not just more of the same – each new survey reveals how growers continue to adapt their Integrated Pest Management (IPM) programs to manage new pests, test new products and re-evaluate old strategies.

Vineland’s Biological Crop Protection research team surveys growers every four years, providing a snapshot of the pest and disease challenges faced by Canadian greenhouse growers. The most recent online survey on greenhouse ornamentals received 47 responses across four provinces between January and March, 2022. Most responses were from Ontario, and represented around 24 per cent of the floriculture greenhouse acreage in the province. Respondents were wholesale, propagation and retail growers, cultivating 50 unique primary crops, reflecting the wide diversity of the Canadian floriculture industry.

Positive trends: Where we are, where we’re going
As we look at the trends between surveys over time, we get a good picture of where the industry is heading (Hint: We like what we see!). Biocontrol use has been consistently high over the last two survey periods. Nearly all survey respondents report using at least some level of biocontrol for pest management. In 2022, we found the majority of growers have adopted an IPM program that is mostly based on the use of biological control agents.

While the number of growers using biocontrol for pests may not have changed much since the last survey, the extent to which they use it has. Around two-thirds of growers reported using more biocontrol and decreasing their use of pesticides in the last five years. This continues the trend seen in previous surveys.

The motivations for using biocontrol were similar over the years. For example, pesticide resistance was the main reason growers used biocontrol in both 2018 and 2022. Growers also continue to value both the low-to-no restricted entry interval (REI) and the better worker health and safety offered by biocontrol. More than half of growers also cited better efficacy and the loss of access to certain pesticides among their reasons. One motivation is on the rise: nearly a quarter (23 per cent) of 2022 respondents (up from 14 per cent in 2018) said they use biocontrol because of concerns for pollinators’ health.

Same as it ever was
Some aspects of IPM are more consistent than others and the top pests and diseases have proven that they’re here to stay. 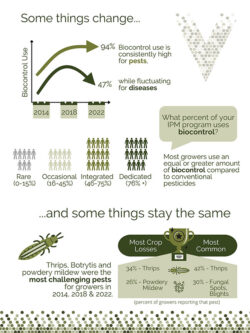 The majority of growers use an equal or greater amount of biocontrol compared to conventional pesticides.

The same diseases causing the most trouble in previous surveys topped the list again in 2022. Fungal leaf spots and blights such as Botrytis were the most common diseases for 30 per cent of growers. Over three quarters of those growers were happy with their IPM program for these diseases. One quarter of growers surveyed listed powdery mildew as having caused the most crop losses in their operation (average of 5.7 per cent loss). Generally, growers expressed confidence in their ability to control disease pressure through proper growing climate and good watering practices.

As for pests, thrips have reliably taken the top spot year after year. Thirty-four per cent of growers surveyed singled out thrips as having caused the most crop losses in their operation (average of 6.4 per cent loss). Thrips were also the most common pest, reported by 42 per cent of growers.

While the fact that thrips are the top pest hasn’t changed, how they are affecting growers has. Since the last survey in 2018, growers’ satisfaction with their thrips IPM programs has fallen from 61 per cent to 47 per cent. At the same time, nearly 60 per cent of growers are reporting thrips outbreaks have become more frequent or severe within the last five years.

Experimenting their way to success
Over the past two years, growers have shown an incredible ability to adapt quickly to changes, but this is not a new phenomenon. Things are constantly changing in IPM. There are always new products, techniques or technologies for growers to try. A big part of the reason Canadian floriculture growers are champions of biocontrol is their willingness to experiment (we have that in common!). With so many different tools at their disposal, it can take some trial and error to find the optimal strategy for each operation. 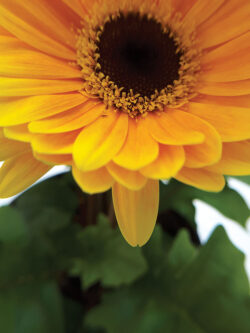 Nearly all survey respondents said they would be willing to try a new predatory insect in their greenhouse. How well a new biological control agent or strategy works will ultimately determine if growers stick with it.

In the past, our laboratory conducted research on dips to manage whiteflies and thrips on imported cuttings, resulting in label expansions for Kopa, BotaniGard WP, SuffOil-X and Landscape Oil. Among survey respondents who grow their plants from cuttings, 73 per cent use dips. This proportion remaining virtually unchanged since the last survey (74 per cent) indicates growers have found this strategy to be effective and easy to implement.

Similarly, while half of respondents say they use nematodes, like Steinernema feltiae, to manage soil pests, another 32 per cent say they don’t anymore. Many of the reasons for no longer using nematodes center around implementation; they found nematodes too difficult to use, incompatible with other applications, or their growing practices/crop made nematode applications impractical. Some growers found soil dwelling predators such as Atheta (=Dalotia) coriaria and Stratiolaelaps scimitus (=Hypoaspis miles), or microbials (e.g. Beauveria bassiana) more suitable.

Knowledge is power
The proper identification of pests and diseases goes a long way towards formulating an IPM program that will work. About two-thirds of respondents report using diagnostic services to identify diseases. Two-thirds of survey respondents also said they have used a dichotomous key and a microscope to identify their thrips to species, or have had their thrips identified by a professional. This shows how willing growers are to incorporate new ideas. We only recently learned that there are more than just western flower thrips affecting floriculture crops. Growers most commonly see western flower thrips (80 per cent) in their greenhouse, followed by onion thrips and Echinothrips, each reported by 30 per cent of survey respondents.

Another important key to success is knowing when to ask for help. The majority (75 per cent) of growers report using an IPM consultant. Trying to navigate through all the new and existing biocontrol options is tricky, and consultants can help tailor an IPM strategy to suit the unique needs of each facility.

Between increasing global trade, climate change and shifting from conventional pesticides, there will surely be more pest and disease challenges on the horizon.

Forward, together
When asked how floriculture growers prefer to learn about new production and IPM practices, one of the top answers is “other growers.” This spirit of collaboration and openness, along with a willingness to experiment, have served Canadian floriculture growers well in the past and will continue to do so in the future.

Between increasing global trade, climate change and a move away from conventional pesticides, there are sure to be more and different pest and disease challenges on the horizon. New products will be developed, as older chemistries are no longer effective or available. An increasing number of growers are appreciating the importance of environmentally-conscious growing practices and the protection of pollinators. Canadian growers will continue to experiment, innovate and collaborate. We have no doubt this industry has what it takes to handle whatever challenges come its way.

The 2022 survey was supported by the AgriScience Program under the Canadian Agricultural Partnership of Agriculture and Agri-Food Canada. We thank the ornamental growers for their participation. Looking for data on pests and diseases in Canadian vegetable greenhouses? Help us build our dataset by completing the vegetable grower survey. Scan the QR code to access the online version.