Features Fertilizer Inputs
GETTING TO THE ROOT OF SHIPPING CHALLENGES

University of Guelph research is optimizing application methods of root-growth stimulants to ensure plants are well-anchored in the pot. 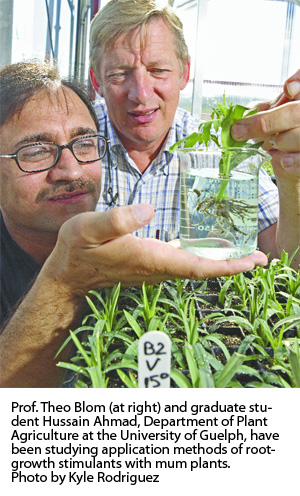 Chrysanthemums with shallow roots have been causing trouble for Canadian floriculture by breaking and shifting during transport. This cuts into profits, lowering market prices for growers. To solve this problem, University of Guelph plant scientists are working towards deeper mum rooting systems, so that the plants are better anchored in the pot.

“Canadian pot mums need to arrive intact to their purchase point,” says Ahmad. “Our research can be used to grow mums with secure root systems to help attain competitive prices in a market where every penny counts.”

Ahmad says that greenhouse growers have been using widely varying types, application methods and concentrations of expensive stimulants to promote root growth, but they’re only focused on dipping the bottom one to two centimetres of cuttings. This results in a poor and shallow root system after planting, and renders plants that do not stand up during shipping.

In his study, Ahmad dipped greater portions of cutting tips (bottom three to four centimetres) to compare varying dip periods using the rooting stimulant indole-3-butyric acid (IBA), a natural plant growth hormone. In the first application, mum cuttings were dipped for only a few seconds in varying stimulant concentrations. They found this “short-dip” method (at higher stimulant concentrations) encouraged a very deep root system at the tips of cuttings.

But Ahmad says using this short-dip method for commercially available stimulants (powder and gel forms) adds significantly to production costs, with only a slight benefit to the rooting of mum cuttings. In fact, the method can use up to 4,000 or more parts per million of the expensive stimulant. Also, cuttings can be very sensitive to solution types, as prolonged dips in high concentrations can burn cuttings so that they will not root, root poorly or become diseased.

As an alternative, the research team found applying the stimulant in a “long-dip” method also encouraged better root growth. Similar to the short-dip method, cuttings were completely immersed in a low-concentration solution (about 100 ppm) for three minutes and then kept wet overnight. Once these treated cuttings were planted, Ahmad says they grew roots farther up the stem (up to four centimetres) to anchor the plant more firmly in the pot.

The long-dip method is easier for growers to use because cuttings can simply be dropped in and left for several minutes without concern for burning, says Ahmad. Because fewer plant hormones are used, fewer need to be disposed of after dipping, which saves money for growers. He says the big difference in the current growers’ practices and the new methods involves skillful application of the right stimulants at the right concentration.

This research will be a major benefit to industry, as pot mums become more marketable and withstand shipment over greater distances. The added edge could help the industry be competitive internationally with countries like Mexico.

But before applying the dipping method with stimulants other than IBA, Ahmad cautions growers that the method may not work for all of them. He compared long-dip and short-dip methods using naphthalene acetic acid (NAA), a compound found in many commercial root stimulants. Ahmad found the compound had little or no added effect in both short and long dip methods.

In related research, Ahmad found that just using powder application of root stimulant IBA resulted in no significant benefit to the rooting of mum cuttings compared with cuttings that received no hormone at all. He found that when applied in solution form, IBA produced far better rooting results compared to powder applications.

In his studies, Ahmad visually gauged how well roots had grown, but to get the most accurate results possible, he also measured roots using a specialized scanner called the Win Rhizo system. The scanner counts root numbers and accurately determines the total root length for each plant.

While this study was only able to examine two mum varieties (‘Duluth’ and ‘Presidio’), Ahmad plans to continue research into other variables that may affect rooting abilities and responses to stimulant application methods.

Impressed by his work, Flowers Canada awarded Ahmad with the Best Student Presentation 2006 at a recent conference.

Funding was provided by Flowers Canada.

Arthur Churchyard is a writer with the SPARK (Students Promoting Awareness of Research Knowledge) program at the University of Guelph.