From rootzone management to screening strategies, it’s time to think ahead. 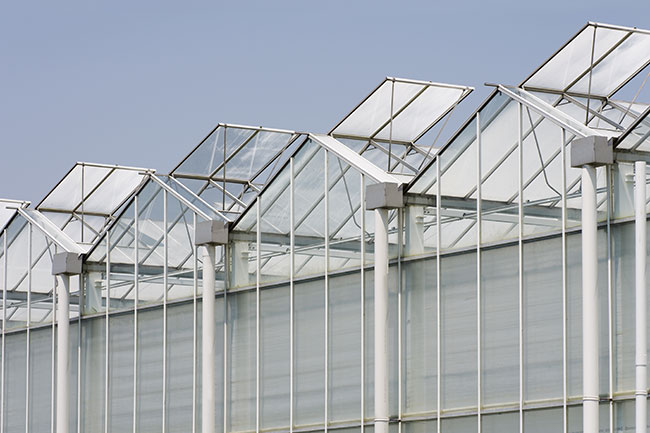 For greenhouse producers looking to steel their crops against the summer heat, now is the time to prep, conduct maintenance checks, and ensure that their summer game plan is good to go.

In B.C., Tineke Goebertus of Vortus Greenhouse Consultants thinks back to the heat dome which enveloped many parts of western Canada last summer. Temperatures reached 42 °C in the third part of the season, leading to fruit set issues. “It cost us a lot of production,” she says. There were soft fruit issues in peppers and the end of the season saw smaller fruit for both peppers and tomatoes.

However, she also found that growers who had better rootzone management fared best.

The warmer it gets, the more oxygen the roots need, Goebertus explains. Her main piece of advice is to avoid overwatering and to make sure there are enough drain holes such that the roots have access to adequate oxygen. “For me, pH is the biggest gauge for how wet the growing media is,” she says. If the plant is happy, the pH tends to go up. If the pH is low, it’s a sign the roots are swamped.

“I always use the example of a colander,” she says. If a faucet is turned on above it, the rate of drain depends on the number of holes in the colander. “In the summer time, you need more holes.” As an added plus, more drainage holes will allow for better EC control. “If a plant is going limp, you assume it doesn’t have enough water,” she says. “But a plant can also flag because it has no, or not enough, healthy roots to take up the water it receives.”

As radiation goes up, ventilation often follows, but beware of overventing. “If you overvent in the morning, that means you’re keeping the greenhouse cooler for longer, but it doesn’t mean plants are happier,” says Goebertus. When visiting her clients, she prefers to walk inside the greenhouse, look at the crop and get a first-hand feel for the climate – whether it’s muggy, warm or drafty – and at different times of the day. She then takes a look at the climate graphs, which she says are “powerful things,” noting radiation levels, fan use and humidity, for instance, then looking for correlations.

“Climate includes temperature, light, humidity, and CO2,” she says. “Plants can take care of themselves, but we have to make sure they’re sitting in an environment where they’re happy and healthy.”

For Dr. Fadi Al-Daoud, greenhouse vegetable specialist for the Ontario Ministry of Agriculture, Food and Rural Affairs, his first and foremost recommendation is to conduct early monitoring of nutrient balances while the crop is still establishing. “Make sure that the nutrient balances in the solutions provided for the plants, as well as the nutrient uptake by the crop, are appropriate. When you have unbalanced nutrient uptake and heat stress added on in the summer, it really exasperates some of the physiological stresses that the plants go through. That’s where a lot of the issues happen.” Symptoms of nutrient imbalances may not present themselves as clearly during the cooler shoulder seasons.

“Make sure your sensors are working properly,” Al-Daoud adds. This includes various climate sensors and computer connections. “Make sure everything is calibrated and working as they should.”

Early spring is also an ideal time to order any coatings, shade materials and protective covers – or at least make sure they’re on-hand and ready, as advised by both Goebertus and Al-Daoud. With shipping and supply chain issues, these materials may encounter delays.

That being said, Goebertus works with one producer who uses double energy screens and another who has an energy screen plus a shade screen. Neither combination was enough to reverse the effects of extreme heat from the heat dome last year. “Extended temperatures over 32 °C, and [being] very warm at night, are simply not good for a crop,” she says.

Still, retractable shade screens or curtains could be useful tools for the general summer toolbox. The late winter or spring periods would be an ideal time for maintenance tasks such as motor tune-ups or checking for frayed wires, says Robert Hanifin, technical specialist with Svensson Climate Screens.

When not in use, screens should be kept bundled and dry. “If it’s not staying dry, deploy it occasionally to make sure it dries out before it’s bundled up completely,” Hanifin advises. Otherwise, the curtains can develop algae or mildew, affecting light transmittance and durability of the curtains over time.

Hanifin notes that his growers in North America tend to use a single energy saving screen that doubles as shade in the summer months. However, trends in Europe would suggest that multiple screens could provide more flexibility throughout the year.

“It is very common in Europe that a grower…can use two combined energy curtains to shade, especially if the curtains are closed in opposite directions,” he explains. Some energy screens offer some degree of shading. Partial closure of both energy saving screens can shield the crops from full sun and the gaps create a chimney effect for airflow when the vents are open.

Choosing a shade-specific screen as a second curtain won’t offer greater energy savings, but it could help keep the greenhouse cooler in the summer with its open-knit structure.

An increasing number of greenhouse producers have added blackout screens or swapped out their clear energy screens for light abatement purposes in recent years, he adds. “If you partially deploy a blackout screen, you’re putting a shadow on the crop, which isn’t ideal… but if you do that midday, it can do a lot in terms of reducing temperature.” If used in a pair, Hanifin recommends deploying a clear energy curtain at 80 per cent with the blackout at 20 percent.

“It comes down to what’s going to work best for you, for your particular crop and location, and the facility you’re in,” says Hanifin. “I think the extremes – especially the summer extremes – are going to become more prevalent. You may end up using screens in a different way than you otherwise would.”

“If you’re interested in cooling, shade materials that offer diffusion and high reflectance are going to be best,” says Robert Hanifin.

He encourages growers to ask how the diffusion of their curtains is measured. “What [suppliers] should tell you is that the diffusion is measured in what’s called hortiscatter. In simplest terms, it’s a measure of how much light going through the screen or curtain is being deflected in all directions underneath [it].” This value often ranges from zero to 100 percent. The higher the value, the greater the diffusion, allowing for more even light and temperature distribution both vertically and horizontally.

Operators may also notice that greenhouse roof materials or glazing mention “haze” rather than hortiscatter. “[Haze] is the proportion of the light that’s deflected at least two degrees. You could have glass with 100 percent haze, but it may be that all of the light is only deflected two degrees. High haze glazing material is not necessarily high diffusion.” While having diffuse glass or poly can be advantageous, it’s important to take into account the light transmittance of the glass or poly year-round.

As for reflective material, aluminum is a common choice and one that Hanifin estimates will reflect about two-thirds of the incoming light. What’s left is absorbed as heat energy which eventually radiates into the greenhouse. “If you have the more advanced light diffusion shade screens that exist today, they’re manufactured with materials that are as reflective or more reflective than aluminum.” When paired with diffusive properties, the screen/curtain itself holds less heat energy and therefore has less to radiate into the greenhouse.

Read up on heat-related physiological disorders in tomatoes on the OMAFRA GH vegetables blog.