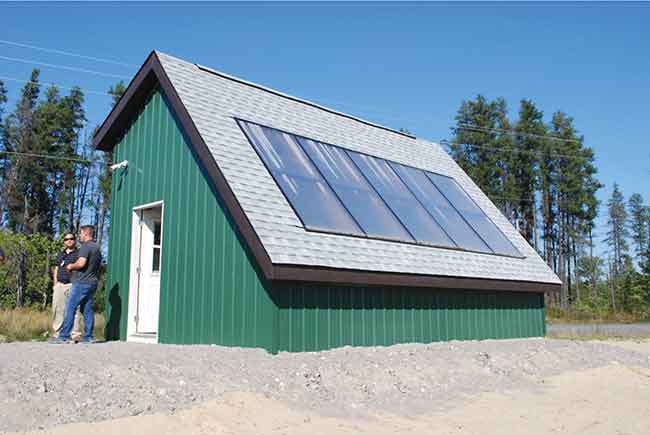 June 2016 – In our August edition last year we presented an overview of a few of the new alternative energy projects across the country. This year, we have more exciting news to share, along with some recent updates.

Let’s start with the updates.

Borealis Geopower has now officially partnered with the Village of Valemount, B.C., and the Valemount Community Forest (VCF) to develop a unique renewable energy eco-park that will include greenhouses. Energy from the site, one of Canada’s best-known geothermal hot spots, will be harnessed for heat and potentially also electricity generation.

The location is a 240-acre brownfield site south of the village, recently purchased by VCF. In addition to greenhouses, the “Geo-Park” will feature a brewery, an aquaculture facility and projects relating to eco-tourism and forestry.

Next we go to Policella Farms in Kingsville, Ontario, where Rick Policella provides an update on their 200 kW solar energy project, installed three years ago. Policella Farms is a fourth generation, family-owned grower, packer and shipper of premium greenhouse tomatoes, peppers, cucumbers and other specialty products, with another facility in nearby Detroit.

The firm’s solar project includes about 1,050 panels, with 20 invertors that allow them to perform at peak capacity even on days with low light levels. Policella says the system is working well and there have been no headaches. “We did our research ahead of time,” he notes. “We expect to achieve our return on investment within the next two years.”

Research in Montreal into biomass greenhouse heating is still going strong. The project was started two years ago and is led by Dr. Mark Lefsrud, a professor at McGill University. It is funded by BioFuelNet Canada.

Lefsrud and masters student Yves Roy designed the Biomass Furnace Flue Gas Emission Control System (GECS), which recaptures lost energy and CO2 from a wood pellet furnace and redirects it to the greenhouse. GECS consists of a rigid box air filter coupled with two sets of heating elements and a catalytic converter. Test results show the greenhouse air is well within Health Canada’s air quality guidelines for indoor gas mixtures and contaminants. Lefsrud notes that end-users may even be able to claim a carbon credit.

The McGill team has applied for a patent for GECS and is busy enhancing the product to get it ready for market. Team members are adding a control system to allow growers to adjust CO2 levels. Lefsrud says testing in a full-scale commercial greenhouse will be carried out this fall.

“We replaced the front-end filter HEPA system with a combined electrostatic cyclone system, which can pull out 96 per cent of particulate matter,” he explains. “This particulate removal system can be used on any biomass system.”

COMMERCIAL GREENHOUSE SOLAR PANELS
California-based Soliculture is expanding a project the company began in 2014 at the Alberta Innovates Technology Futures greenhouses in Vegreville.

The expansion is supported by funding from the province’s Climate Change and Emissions Management Corporation.

Soliculture partnered with another company called Solaria to create their commercial greenhouse solar panels known as LUMO. These panels improve light quality for plants by amplifying beneficial wavelength colours and also generate electricity with no loss to production.

Melissa Osborn, Soliculture’s director of engineering, says her firm sizes each LUMO system so it will produce enough electricity to offset each grower’s annual usage. “In our experience, there is enough area on the roof of commercial greenhouses to…offset even the most energy-intensive greenhouse operations,” she explains. “Our LUMO panels generate 50 to 100 watts per square metre of greenhouse area.”

There are now panels on the roof of two of the Vegreville greenhouses. “We have been monitoring power output of the system for almost two years,” Osborn explains, “as well as performing plant trials under the panels on several crop varieties.”

NEW PROJECTS
SunSelect, based in Aldergrove, B.C., is gearing up to use excess heat and CO2 from Caterpillar’s natural gas cogen facility in Mossville, Illinois, in greenhouses to be built near the plant. The SunSelect greenhouses will operate year-round, and serve as the company’s Midwest hub for both production and distribution. Up to 300 permanent jobs will be created.

Circling back to geothermal, the first of many planned year-round greenhouses is under construction in Magrath, Alberta (otherwise known as the Garden City). When complete, the flagship “Starfield Centre” (designed and built by Ag Spectra Whole Earth Science and Technology) will house an indoor community park, fruit trees, berries, grapes and veggies.

The project’s first harvest is expected this month. By 2020, Ag Spectra hopes to have 70 other Starfield Centres across southern Alberta.

Ag Spectra CEO Lonnie Mesick says each greenhouse will be about 20 acres, with about 20 geothermal wells for a worst-case scenario of -40 C winter weather. “We are not planning for additional heating,” he explains, “with the exception of stored thermal mass heat.”

The design uses a high-strength, fluorine-based, self-cleaning plastic. “The glazing is manufactured in pillows that are interlocking with a custom-extruded aluminum frame and cable trusses for the support,” Mesick explains. “Proof of concept was worked out in Israel and China before coming to Canada two years ago.”

He gives the total cost per 50-metre by 80-metre greenhouse as less than $600,000 and expects each operation to be profitable within three years.

COMMERCIAL-SCALE AQUAPONICS IN A NORTHERN MARKET
Construction of a commercial-scale aquaponics greenhouse is expected to begin this summer in Espanola, about 90 kilometres west of Sudbury in northern Ontario.

Involved in the project are Cambrian College, Helios Whitefish River First Nation and a company called Greenhouses Canada. The 16,500-square-foot facility will produce lettuce, broccoli, tomatoes, cucumbers and tilapia, and include office space and a farmers market.

The design for the greenhouse was developed by Kameal Mina, a professor in the engineering, technology and environmental studies department at Cambrian College (Sudbury), in 2010. Retired professor Josef Hamr also contributed.

In 2013, Jeff Scharf approached Cambrian College with interest in adopting this concept for year-round greenhouses, which led to the creation of his firm, Greenhouses Canada.

A pilot-scale greenhouse using the same design has already been built, housing cucumbers, lettuce, tomatoes, passion fruit, pomegranate and more. It was funded by Ontario Centres of Excellence and the National Research Council and built by Greenhouses Canada staff and Cambrian College students.

In both the pilot and commercial greenhouses, only the south-facing wall is glass. The rest are heavily insulated “double staggered” walls, with an R-value of between 50 and 60 and a construction design where two-by-fours are alternated vertically in a staggered fashion.

The main heat source for the pilot greenhouse is in-floor electric, but Mina says a biomass cogen system is being explored for the commercial venture. The commercial building will also employ passive heating and cooling through thermal masses such as flooring and water reservoirs, with a total yearly heating bill expected to be only $1,500.