News
Get ready: spring may rank among top 10 warmest 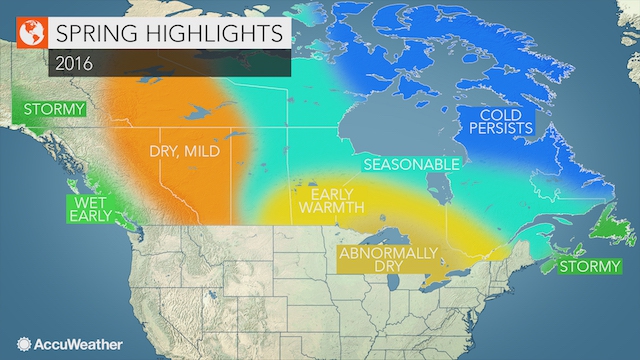 The season will get off to an early start across a large portion of the country, as El Nino continues to exert its influence.

El Nino is defined by above-normal ocean water temperatures in the central and eastern Pacific, near the equator. In Canada, this can result in warmer-than-usual springtime weather.

This will be the case for much of Canada this year with the exception of areas from northern Quebec through Labrador. Colder weather will result due to a prevailing northwesterly flow of cold air originating over the ice-covered Hudson Bay.

In Western Canada, a persistent area of high pressure will keep much of the region, including Calgary and Edmonton, drier than usual. The main storm track will detour northward into Alaska.

A lack of snow cover across the southwestern prairie region should help accelerate the warmup for cities like Regina and Saskatoon during the spring.

Despite the drier and mild weather, ski conditions this spring will be very good from British Columbia to Alberta due to a deep snowpack. This will bode well for resorts such as Whistler Blackcomb and Lake Louise.

In the East, the primary storm track this spring will run from the southern United States then up into Atlantic Canada. This will lead to a continuation of stormy conditions, especially from Nova Scotia and up through Newfoundland through April.

DRIER IN MOST OF ONTARIO AND SOUTHERN QUEBEC

With the primary storm track too far to the south and east, most of Ontario, including southern Quebec, will be drier compared to normal this upcoming spring.

The drier conditions will lead to some warmth early in the season, but there will still be plenty of cold nights through the season with the potential for a late freeze.

From the southern Prairies to Ontario, the warmer spring weather will cause the severe thunderstorm season to get off to an earlier-than-usual start.