The competition jury described the Ministar, of Havatec B.V., “as the first technology capable of automatically separating the flowers and laying them on a conveyor belt, one-by-one, at high speed.” A total of 465 new products and services were registered for last fall’s competition. 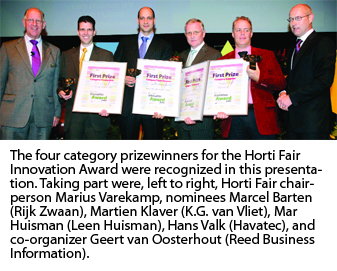 This year’s International Horti Fair in Amsterdam RAI attracted 49,837 horticultural professionals from over 110 countries. Among highlights were the presentations of the annual Innovation Awards. Some 465 nominations were submitted, with the jury selecting 18 for the final judging.

Topping the finalists was the Ministar system of Havatec B.V. as the winner of the Horti Fair Innovation Award for 2006.

The other category winners were the cocktail cucumber ‘Cocktail Queen RZ’ of Rijk Zwaan, the diaphragm screen of Leen Huisman B.V., and the re-usable logistical carrier of K.G. van Vliet Handelsmij. The winners were chosen from 465 new products and services registered with the organizers, 18 of which were short-listed by the jury.

The following are the jury’s comments on the winning products.

• The Ministar of Havatec B.V. from the Supplies Category: “This machine, used for automated handling of gerbera flowers, is the first technology capable of automatically separating the flowers and laying them on a conveyor belt, one-by-one, at high speed. This saves labour for gerbera growers and will, in due course, help the growers of other cut flowers, too. The jury praises the way in which this innovative result was achieved, namely through long-term co-operation between a group of growers and a manufacturer. We are increasingly seeing successful collaboration of this kind in horticulture.”

• Rijk Zwaan won first prize in the Production Category with its ‘Cocktail Queen RZ’ cucumber. “This is a small cucumber of 8-10 cm in length and weighing about 30-60 grams. It is specifically grown as a school or office snack. The whole cucumber, peel and all, can be eaten from the hand. It is very attractive, deliciously fresh, aromatic and crunchy. This is an example of a market-expanding product, now that there is increasing focus on the international market.”

• The diaphragm screen of Leen Huisman B.V. won in the Technology Category. “Two screen curtains, both of which are made of strips of aluminium and transparent cloth, are mounted on each other. The curtains can be slid over each other to infinitely regulate the amount of light that enters. This enables the amount of light, air humidity and CO2 content to be regulated more quickly and flexibly. This ease of regulation has proved to be a major advantage in practice.”

• K.G. van Vliet Handelsmij B.V. won first prize in the Trade/Services Category for its re-usable logistical carrier. “This iron carrier can be used many times a year. It increases the loading capacity by 10-25 per cent and helps to standardize packaging. It is also environmentally friendly, since wood need no longer be felled and there is no longer any chemical waste to be processed. Although it has only a limited range of application, it makes an important contribution to sustainable entrepreneurship.”

OTHER SHORT-LISTEDPRODUCTS AND SERVICES
The other short-listed firms in the Technology Category were:
•     Berg Product B.V. for its modular pipe rail trolley.
•     Formflex Horti Systems for its high-end cable gutter specially designed for communication and electricity cables used in greenhouse environments.
•     Hoogendoorn Automatisering B.V. for its glasshouse air condition system, ‘Aircokas.’
•     HortiMaX B.V. for its CO2  Optimizer.
•     Hotbox International Ltd. for its ‘Rosalux.’
•     Frans van Zaal Totaal Techniek for its ‘Glasshouse without gas.’