Features
From tomatoes to strawberries 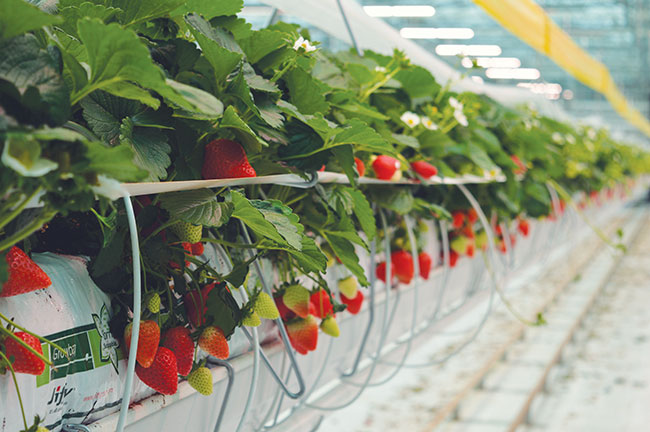 Great Northern Hydroponics is transitioning from greenhouse tomatoes to pursue strawberries. ALL photos courtesy of Ever Tru Farms

At Great Northern Hydroponics in Kingsville, Ont., the greenhouse tomato and cucumber producer has replaced 25 acres of tomatoes with strawberries in a fixed gutter grow system. They’re planning for an additional 15 acres this summer with the ultimate goal of reaching 65 acres of strawberries by 2023.

Marketed under Ever Tru Farms, the vertically integrated operation is targeting a rapidly growing strawberry market with current distribution to Ontario and parts of the U.S. Loblaws was one of the major Canadian retailers who signed on with Ever Tru once production started.

Guido van het Hof, president of both Great Northern Hydroponics and Ever Tru Farms, first spotted the opportunity in strawberries after seeing potential improvements that could be made in their production from places like California, Mexico and Florida.

Breeding strawberries to withstand a long truck ride north to Canada can cause important properties to be neglected, including flavour, shelf life, fragrance and texture. “Retailers historically had a lot of shrinkage because often that berry was already five, six days old by the time it got on the shelf,” says van het Hof. “Since we’re bringing these varieties into the greenhouse and producing a lot closer to market, we’re able to produce a much better flavoured berry in season, year-round.”

The journey wasn’t easy. They trialled for six years before taking the next big step into largescale commercial production. “We needed to gain knowledge and experience with varietal choice, cultivation practices, scheduling and development of a marketing plan.”

By choosing an ever-bearing variety, they will be in production 365 days a year for continuous product, rather than relying on multiple plantings. As Paul Mastronardi, vice president of sales for Ever Tru Farms, explains, most strawberries coming from California use short-term, June-bearing varieties that produce about three to four crops a year.

“Because we set up our own sales and marketing under Ever Tru farms, it is our ambition to pick, pack and ship the same day…so that we can pick product at the peak of its flavour,” says van het Hof.

Meeting demands for sustainability
Mastronardi sees a major opportunity for growing strawberries in the controlled environment of a greenhouse, and sustainability has been a key part of the conversation.

“We’re saving roughly 15,000 miles by growing greener strawberries all year-round,” he says. “We’re within an eight-hour window for delivery, and that ultimately leads to a fresher product for the consumer.” He points out that consumers are increasingly interested in knowing where their product comes from and how it’s grown.

Van het Hof says their approach to sustainability includes multiple layers, such as biological pest management, energy screens to conserve heat, night interruption lighting to enhance productivity, trials with LED lighting for better energy efficiency, as well as water recycling. “We use a fraction of the water compared to outside berry production,” he says, explaining that their irrigation system allows them to pasteurize the recirculated water.

As with the tomatoes, they use the CO2 from their combined heat and power units as well as boiler heating system to feed their plants. What’s different is the natural gas required – the strawberries only need about half the amount of heat as tomatoes do. “We’re going to halve the gas consumption with strawberries versus tomatoes because they require half the heat.” With the increase in strawberry acreage planned for 2023 along with energy savings through the principles of Plant Empowerment, van het Hof says, “Slowly but surely, we’re almost at two and a half times of what the original carbon credits were with 50 acres of tomatoes back in the day.”

At Ever Tru Farms, the pursuit of innovation is as strong as their passion for the perfect strawberry experience.

“What feels so good about it is we have such a good story to tell from an environmental perspective, from a flavour perspective, from an overall berry experience,” says van het Hof. “We stand behind the product that we pump out. It’s clean. It’s wholesome. It’s pure, and it’s ever true.” 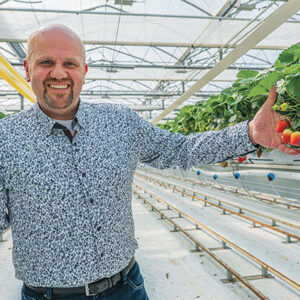 Guido van het Hof and Paul J. Mastronardi have marketed their strawberries under Ever Tru Farms. 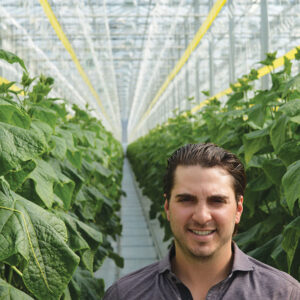 Reaching net negative
Even before their venture into strawberries, Great Northern Hydroponics was already growing on a net negative carbon footprint by introducing combined heat and power (CHP) units back in 2008.

“A portion of the boiler heat that we historically needed to generate through the natural gas-fired boilers was displaced by the combined heat and power units,” says Guido van het Hof. “And because of the high efficiency of the [natural gas boilers], which is greater than 95 per cent, that heat displacement created a negative carbon footprint for us overall.” That calculation, he says, was performed by an engineering firm at the time.

Their greenhouse also makes use of the CO2 scrubbed from the flue gas as well as condensed from the high-efficiency boiler for plant fertigation, but this practice doesn’t give them extra credit. In fact, van het Hof was informed that plant sequestration of CO2 is merely considered a form of temporary storage. Once consumed, the carbon can then be released again via the human gastrointestinal system. The leftover biomass of the crop is often composted or landfilled, re-releasing greenhouse gases such as methane and CO2 in the process. “It’s irrelevant if I agree with that assessment or not, but those are the rules today,” he says.

As it stands, Ontario greenhouse producers are charged the carbon tax based on use, through the gas meter and at the point of its arrival to the greenhouse. There is no consideration given to the sequestration of CO2 by plant mass, nor the treatment of CO2 post-combustion, like the previous short-lived, cap-and-trade program that was eventually cancelled in 2018.

“The mindset was that, he or she who consumes the most amount of fossil fuel is the one who has to carry the highest burden from a financial perspective.” Previously, greenhouse producers in Ontario were unsuccessful in obtaining a carbon tax waiver, similar to the one that was available to greenhouse producers in Alberta and B.C. It wasn’t until 2019, when the federal government stepped in with its carbon backstop, that Ontario greenhouse producers achieved an 80 per cent relief on the carbon tax, applied on fuels used for heating and CO2 production.

Although the foundations of carbon taxation are motivated by good intentions, van het Hof is competing with foreign producers who are not subject to the same limitations. “As a Canadian producer, we have to call it a competitive disadvantage.”

~With files from Greenhouse Canada