Conifers that are rare and unusual were generally of little interest to gardeners and certainly hard to find 20 or 30 years ago, said Jim Lounsbery, co-owner of Vineland Nurseries in Beamsville, Ont. 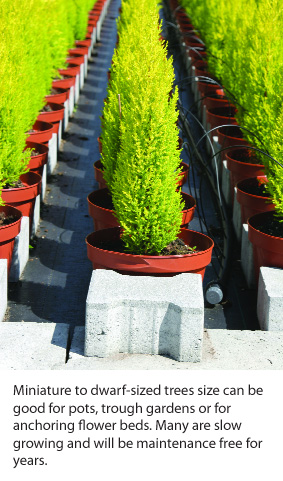 Conifers that are rare and unusual were generally of little interest to gardeners and certainly hard to find 20 or 30 years ago, said Jim Lounsbery, co-owner of Vineland Nurseries in Beamsville, Ont.

Speaking at the Congress 2007 show in Toronto in January, Lounsbery says consumer interest in unusual or different plant material continues to grow while building lot sizes get smaller. Dwarf and unusual evergreens are ideally suited for today’s yards and gardens, he said. They mix well with other plants and look good around a pool area, or placed near rose trellises.

There is now a wide range of stock available from the U.S., Europe and Canada, but before garden centre operators place their orders, they should know what their customers like and want, says Lounsbery. They should also consider the area’s soil type and climate, being well aware of the zone the trees are suited for.

Providing some background information on the tree industry, Lounsbery started off by noting that the needles on evergreens are considered “leaves” by the industry. He added there are five methods of selection used for propagating conifers with the first being from seedlings. “Seedlings are big in the forestry industry,” he said, and chosen for specific characteristics.

Juvenile fixations are the second method and are generally not seen in garden centres. As the name implies, these trees do not give up the feathery fuzz of their juvenile foliage at adulthood. “It is this fuzz that attracts customers, and some plants are selected for this characteristic to sell,” he noted.

Sports and witch’s brooms are the third method of selection, and the term refers to trees sporting branches different from the rest. This is common among pine and spruce. Congested foliage on the branch appears as a broom, and is often caused by insects, disease or genetics. These anomalies can be cut and propagated, though Lounsbery cautions, “they may revert to their parent plant, or they could stay strange.”

Alpine and mountain formations are the fourth, and usually result in brooms caused by extreme temperatures. They often retain this habit in good weather, he said.

Cultivariant selection is the fifth method. Cuttings are taken from different parts of the tree that yield that section’s particular growth habit. One example of this is the globe cedar.

Lounsbery then discussed at length a series of evergreens he considers well suited for the Niagara Region to Zone 5. “There are lots out there, and this is just the tip of the iceberg,” he said.
Of the plants in the trade, Abies balsamea hudsonia is a popular dwarf. Growing to about three feet high, and two and one-half feet wide, this tree is good for most zones, says Lounsbery, but like most balsam and fir, it does not like “wet feet.”

Lounsbery admits that he really likes the fir family, and in particular, the Abies homolepsis or ‘Nikko’ fir. This one has round needles with a white lining beneath the leaf that makes it stand out. It also has upright cones and grows to 10 feet. While it looks good in the garden, it is generally rarely seen, he noted.

The Abies concolour, also know as the ‘White’ or ‘Colorado’ fir, starts life with pale green leaves that turn a bluish green as the tree ages. This tree can reach 60 feet high and 15 feet wide but it takes a long time to get there. It makes for a good backdrop tree, says Lounsbery, and has full upright cones that shed by November.

‘Horstmann’s Silberlocke,’ also known as ‘Korean’ fir, is an upright tree growing 15 to 20 feet. This tree tends to mound, he noted, and is a hard tree to find at garden centres. If you do find one, Lounsbery highly recommends buying it but be prepared to pay a little extra.

The ‘Nootka False’ cypress can eventually reach 30 feet in height but only seven or eight feet wide. “This is a good tree for small lots,” says Lounsbery, and is now much easier to find at garden centres.

As the name implies, ‘Compacta Argentea Varigatea,’ rates as a compact intermediate sporting variegated leaves. This is a very hardy tree, and works well in the backdrop of a yard or garden.
The ‘Hinoki’ cypress has rubbery-type leaves displayed in a fan-like spread. It germinates well from seed but it may not look like the parent, says Lounsbery. Its little cousin, the ‘Dwarf Hinoki’ cypress, will grow to three or four feet high over the course of 25 years. It is also a very hardy plant with good resistance to disease and insects. Lounsbery says both trees were generally available only on the West Coast but can now be found at most garden centres.

The ‘Nana Lutea’ is a dwarf that grows well to Zone 5, and is available in golden form. Despite being a hardy tree, it is susceptible to wind burn so is best planted in a sheltered area. Its cousin, the ‘Nana Bonsai’ bears similar traits and is good for trimming and training.

Of the miniature to dwarf-sized trees that are good for pots or trough gardens, Lounsbery recommends ‘Kosteri,’ with its open leaves and layered branches. ‘Snowkist’ also has an open presentation, grows to three feet, but wind damage can leave it with white tips. ‘Minima’ starts as a hardy “little lump” in the pot, says Lounsbery, but can reach dwarf proportions after a few years.

The ‘Dwarf Gold Threadleaf False’ cypress is available in either green or yellow. While classified as a dwarf, it has been known to reach 20 feet in height under the right conditions.

The ‘Intermedia’ cypress is ideal for pruning and shaping into different designs such as a series of clouds or for “poodling,” says Lounsbery. If this is not desired, he says it will grow to about three feet in height and width, and will maintain this size with just a light trimming.

The ‘Atlantic White’ cedar, or ‘Rubicon,’ is attractive for its juvenile foliage, says Lounsbery. Its leaves also have the unique ability to turn pink-purple during the winter months.

“Many people are afraid of junipers because of their size, but they’re not all big,” says Lounsbery. The ‘Berkshire’ juniper is a medium size dwarf that is about one foot wide with blue needles. “It’s a native plant here so it’s very hardy,” he added.

The ‘Compressa’ juniper is also a small upright plant suitable for potting but is susceptible to spider mites, and generally hard to find at garden centres. The ‘Gold Cone’ juniper is of a similar size but fast growing, with soft blue leaves that turn to gold by May.

The ‘Loderi’ juniper is a mid-sized dwarf, growing to about four feet high. It has an attractive multi-stem presentation and works well as a back drop tree.

The ‘Emerald Sea’ juniper is considered a horizontal conifer that is fast growing and can reach six feet wide. It is available in blue, works well as a ground cover, and has a rather informal look.
Microbiota decussata, or ‘Siberian Carpet,’ is a good spreader at three to five feet and has needles with a soft texture. This native Russian cultivar does not like wet feet.

Other horizontals include the ‘Silver Mist’ juniper, which is hard to find, and hard to propagate, says Lounsbery. Likewise for ‘Bonin Isle,’ which has a captivating lush green colour. If they can be found, he highly recommends stocking them. The ‘Dwarf Japanese Garden’ juniper can also be used as ground cover or can be trained for bonsai-style balling.

A large and distinctive juniper is the ‘Needle.’ Considered a scraggly looking tree with sharp needles. “It may start off as an ugly duckling but it changes into a beautiful swan,” says Lounsbery.

Another large tree is the ‘European’ larch that is fast growing and can reach 60 feet high and 20 feet wide. Its medium-size cousin, the ‘Pendulous European’ larch, has low hanging boughs and small cones. An even smaller version of the cultivar is the ‘Native’ larch or ‘Newport Beauty’ with its distinctive blue-green leaves. Lounsbery notes that all larch are deciduous conifers so the leaves turn gold in colour in late summer before falling.

The ever-popular ‘Norway’ spruce grows to three or four feet high, is considered hardy, and has cones that stick straight out, says Lounsbery. He added that while they all come from the same family, each tree looks a little different from each other.

Of the other small spruce trees to consider stocking are ‘Little Jamie,’ the thin branched ‘Virgata,’ and ‘Pygmea,’ which can also be used as ground cover. ‘Echiniformus’ takes 30 years to grow one foot high and wide, so works well in pots. The ‘Alberta’ spruce is a fast growing dwarf to medium-size tree that works well in groupings.

‘Arneson’s Blue,’ is a rare find indeed, says Lounsbery. This dwarf to medium size spruce is genetically unstable and has very blue leaves but the tree can revert to green overall or in branch clusters making for an interesting display.

The slow growing, drought resistant ‘Colorado Blue’ spruce remains a mainstay in nurseries and is popular not only for its silver-blue leaves but also for its regular form. Others of interest within the same family are ‘Mrs. Cesarini,’ and ‘Lutea’ which are available in yellow or green.

Just making it into the large category is the ‘Lacebark’ pine at 15 feet. Not considered hardy unless protected from the elements, Lounsbery still recommends this tree for its exfoliating bark and unique colouring.

Other pines of interest include the ‘Japanese Red,’ which is available in pendula form, and ‘Dragon’s Eye’ which is considered fairly hardy and has yellow pinstripes on its leaves, while the ‘Japanese White’ has white and pink leaf tips. The ‘Eastern White’ pine is noted for its small, soft leaf, while ‘Scott’s’ pine is unique for its red coloured bark.

The ‘Bald’ cypress is a large deciduous conifer that does well when wet, says Lounsbery. He explained that its root system develops “knees” which act similar to tiller roots in corn by keeping the plant upright in marshy ground or near bodies of water.

The ‘Eastern’ hemlock is a slow grower that also likes moist conditions, does well near rock and water gardens, and prefers a bit of shelter, says Lounsbery. This hemlock has an open branch display and is available in pendula or white tip forms.

Lounsbery was asked if he had some specific favourites that garden centre and nursery operators should stock and he said that ‘Japanese’ maple, and ‘Mountain’ hemlock always sell well. He also likes ‘Limber’ pine which is fast growing and has variegated leaves. ‘Aurea,’ a new hardy pine, is interesting for its gold coloured leaves in winter that turn green in summer.

When asked which trees do best in road salt conditions, he replied that two-needle pines fare better than five needle, with the ‘Japanese Black’ pine being the most  tolerant.